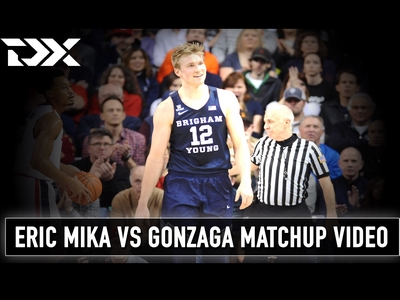 The 6'10 sophomore out of Alpine Utah put together one his best games of the season on a big stage vs a Gonzaga team that was previously undefeated and ranked #1 in the country.

The 22-year old sophomore originally played his freshman season in 2013-14 before taking off two years to complete his Mormon mission. Since returning to BYU, Mika has put up massive numbers in WCC play, where he currently leads the conference in rebounds and is second in points.

At 6'10 Mika is somewhat undersized at the 5 spot where he spends most of his time. He doesn't have exceptional length or athletic ability, but does possess a high motor, is very physical, and has shown a developing skill set on the offensive end. While jump shooting hasn't been a primary part of his offensive arsenal, he showed comfort stepping out on jumpers out to the 3-point line vs. Gonzaga and forced them to defend him on the perimeter.

Mika does not shy away from contact and does a good job initiating contact on face up drives and post ups on the block. He is currently attempting 12.2 free throw attempts per 40 minutes, and got to the line 13 times vs Gonzaga.

Mika displayed his motor on the glass coming up with 11 rebounds, while creating several second chance opportunities on the offensive boards.

Defensively, Mika is currently averaging 2.8 blocks per 40, and showed his timing and instincts protecting the rim as a weak side shot blocker. While he has shown promise as a rim protector, his lack of ideal size and length is evident when he is forced to defend on the block, particularly in this game where he struggled giving up ground and defending the bigger Karnowski around the rim.

Mika is having a very strong sophomore year and is one of the top players to monitor in the WCC.