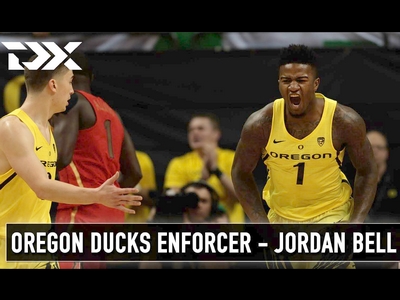 Julian Applebome
@jlapplebome
Julian Applebome analyzes the many different ways Oregon Junior big man Jordan Bell has been able to impact the game on both ends of the floor for the Ducks with his athleticism, finishing ability, rebounding, defensive versatility, and developing offensive game.

The 22-year-old junior out of Long Beach, California was a solid piece for Dana Altman in his first two years at Oregon, but has really taken a step forward this season as one of the more improved players in the Pac-12. Bell is an explosive leaper who uses his athletic ability to finish above the rim, control the offensive and defensive glass, and provide rim protection. His offensive game is evolving, but he has made strides in the right direction. He is still somewhat limited in the half court as an individual scorer, but has improved his back to the basket game and has shown flashes of a mid range jumper.

Bell's defensive impact is evident in his statistics where he is averaging 1.9 steals and 3.0 blocks per 40 minutes, and his ability to defend on the perimeter and control the paint has turned Oregon into a dynamic defensive team Listed at 6'8.5 Bell is somewhat undersized at the power forward position but makes up for his lack of ideal height with his effort, physicality, and athleticism. While he certainly has a ways to go in terms of being a consistent contributor on offense, Bell's ability to switch ball screens, protect the basket, and fly around on the glass as well as finish above the rim offensively makes him an intriguing second-round option as an energy big.