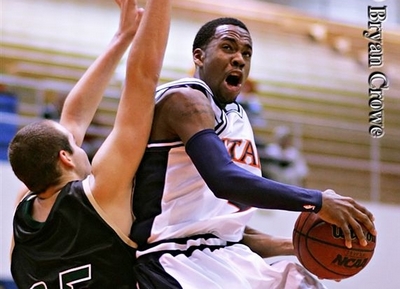 Joey Whelan
@DraftExpress
Bobby Brown is ready. After going through the draft process last year as a junior, the 61 point guard out of Cal State Fullerton is ready for a second trip to Orlando for the pre-draft camp.

I wish the camp was tomorrow, Brown said. Im ready to get this process going again because it was fun last year, so Im prepared for it this year and Im ready to get on it right now.

Rewind six or seven years and the eagerness that Brown exudes today was probably less apparent. At Westchester High School in California, Brown was overshadowed by players such as Hassan Adams, Brandon Heath and Brandon Bowman. The fact that he was only 55 certainly didnt make life on the court any easier for him.

I wasnt athletic and I couldnt jump that high, Brown said. I was an outside shooter; I just shot a lot of threes.

Browns game would take a drastic turn during his senior though when he suddenly shot up to 510. Suddenly he was driving aggressively to the basket, scoring more, and taking over games. A strong senior season wasnt enough though to draw the major schools calling for Browns services. Northern Arizona and Cal State Fullerton both offered scholarships, while Long Beach State was interested in having Brown as a walk-on. This lack of offers affected Brown, who knew that he would need to step up his game at the next level.

I played with a chip on my shoulder, he said. I knew that I needed to get better and be a real point guard; I had to distribute the ball and score at the same time. So I added more aspects to my game when I got to college.

This attitude allowed Brown to make an immediate impact with the Titans; averaging 13.2 points and 3.5 assists in taking home Big West Freshman of the Year honors. After a successful sophomore year in which his scoring and assist numbers increased, several larger schools came looking to convince Brown to transfer over to their programs (which is technically forbidden by the NCAA). For Brown it was one of the easiest decisions he ever made.

I was set on staying, he said. Where I come from youre supposed to know where you come from and stay committed to where you already are at. I never had that thought in my mind to transfer to another school because I thought about where were [the other schools] when I was in high school, when I wasnt getting recruited and they werent even looking at me. Then all of a sudden I get a little recognition and then they want to come and recruit me. So I never looked at it like I was going to leave, I was staying at Fullerton regardless.

Despite his commitment to Fullerton and his stellar career in the Big West, Brown never got an opportunity to play on college basketballs biggest stage: the NCAA Tournament. For Brown and the Titans, their NCAA hopes died when they fell to Cal Poly in the Big West Tournament semi-finals, and despite being 20-10 on the year, they were unsurprisingly not given an at-large bid.

Losing in the Big West Tournament and then having to go home and watch the NCAA Tournament on TV was real frustrating because I got real tired of watching other guys play, and then having to hear my friends on other teams who were in the tournament tell me how fun it was, was tough, he said. Just the whole atmosphere of playing in the tournament and I never got a chance to know what that feels like. So it was real frustrating.

An early end to this senior season may have been frustrating, but for Brown the action was just beginning. Not long after the loss to Cal Poly he was invited to participate in the NABC All-Star game on March 30th, with top senior players from across the country. For Brown is was a great experience, between being in a point guards paradise surrounded by talented teammates and getting to know his peers off the court, the whole experience was positive. In addition to getting great exposure on the court, Brown, along with the rest of the NABC participants got to enjoy a free weekend in Atlanta, including tickets to the Final Four.

Getting invited to play in the All-Star game was an honor and a great achievement, Brown said, but the whole climate [in Atlanta], staying in the nice hotel, getting to go to the Final Four, and being around that atmosphere, I felt like I was in the NCAA Tournament. It was really nice.

Of interesting note, Brown said that none of the seniors talked about the upcoming NBA Draft in any sense, stating that everyone felt it would take care of itself.

Since the NABC game Brown has been at home training and rehabbing. He sprained his ankle and his knee during the loss to Cal Poly, the last game of his college career. The injury occurred, Brown said, when an opposing player inadvertently stepped on his leg, causing the entire limb to twist. This injury prevented Brown from participating in this years Portsmouth Invitational Tournament after he aggravated it during the NABC game.

Despite not being able to partake in some recent events, Brown still has plenty of past experience and knowledge of the pre-draft process. As a junior last year, Brown entered his name in the draft, participating in the Orlando pre-draft camp as well as working out for several NBA teams. The experience, he said, taught him a lot of valuable information.

Going against those guys you see on TV all year, and big name players from different conferences was great, he said. I learned a lot that I took back with me to school; I gained a lot of information that I needed to know going into it. It really helped me a lot, I didnt get to the NCAA Tournament, but it still helped me out as a player.

After going through the experience once, Brown will at least have an advantage in that he wont have the initial nerves of being at the pre-draft camp. He stated that playing loose and aggressive basketball will be key for him, and that he simply needs to take advantage of any playing time he gets.

With the amount of time we get on the court, youve just got to play like its your last time playing on the floor, he said.

Brown also gained plenty of knowledge during his workouts with three NBA teams: the Phoenix Suns, LA Lakers, and LA Clippers. He worked out with several current and future pro players including Jordan Farmar and Nick Fazekas. He called the early-entry experience a win-win situation.

If you go in and play well you get picked, he said. If they say youre not ready and you have things to work on you can go back to school for your senior year and have a successful one. You use all the information you gained to help yourself and your team out on the court.

Brown has completed the agent hiring process, relying on his parents, friends, and teammates to help him with the decision, and now he is ready for his second go at Orlando and the NBA. The road wont come without bumps though, as Brown must face critics who not only think he is too small, but also question if he is too much of a scorer and not enough of a point guard. Brown has a message for anyone out there who thinks he is too small to play at the next level:

You cant judge someone based off of their appearance, you have to give them a chance. You have to watch them on the court and see what they can give you.

As for the individuals who think Brown is all scoring and no passing, he stated he can change as a player and has already proven that on the court this year where he averaged a career best 5.1 assists.

Between now and the draft Brown will be continuing to work on improving his conditioning, his shooting, and his ability to finish in the lane with contact. For the senior out of California who began his high school career as a 55 role player, that doesnt seem to be too tall of an order.
Read Next...