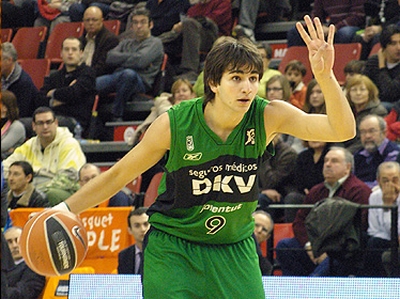 Spanish newspaper Marca broke the not very surprising news yesterday that Ricky Rubio will be entering his name in this years draft. Rubios buyout situationhe has two years left on his contract, and will need to pay 6 million dollars to free himselfremains unresolved, though, meaning still needs to reach an agreement with his team, DKV Joventut, if hes to play in the NBA next year.

Unfortunately for Rubio, Joventut continues to insist, this time via a notice on their official website, that they are not planning on compromising anytime soon, stating that Rubio will have to pay his buyout in full if he plans on leaving for the NBA. They do appear willing to settle for a smaller buyout in 2010, though, if Rubio and his camp are willing to wait that long.

Rubio on his part, came out publicly on Tuesday and stated for the first time under no uncertain terms that its his wish to leave for the NBA this summera move made with very clear intentions. The problem is that all the leverage right now is with the team that holds his contract, as they do not appear to have any real reason to compromise.

One possibility that has been brought up is for Rubios camp to offer a percentage of his second NBA contract as a means to entice to Joventut to his lower buyout immediately.

There likely will not be any type of resolution to this situation until very close to the withdrawal deadline on June 15th.

The while circus around his future may or may not be affecting his play at this pointRubio scored 13 points on 2-8 shooting from the field in a win over Pamesa Valencia on Sunday, going 9-10 from the free throw line while dishing out 7 assists to go along with a season high 6 turnovers and 6 steals.

On a separate note, weve learned that Rubio does not plan on playing at the Reebok EuroCamp in Treviso, despite an official announcement from Reebok confirming otherwise.

Steve Wieberg of USA Today reports that the NCAA has voted to make sweeping changes to their rules that would severely restrict the ability of college basketball players to test the waters starting next year.

Starting next year, college underclassmen will get a lot less time to mull a jump into the NBA draft.

An NCAA panel voted Monday to compress the time frame, giving non-seniors who enter the draft until May 8 to decide whether to keep their names in the pool or resume their college careers. That's more than a month earlier than the NBA's mid-June withdrawal deadline.

No longer will draft entrants who go unpicked have the option of returning to the college game. The NCAA had given them until 30 days after the draft  until late July  to declare their intent to return to school.

The NCAA's new deadline is designed, in part, to settle team rosters and give coaches time to replace departed players before the spring signing period expires. Prospects can sign letters of intent this year until May 20.

Proponents say it also will allow underclassmen who pull out of the draft more time to refocus on academics and lessen "the potential for outside individuals to have a negative influence."

This is obviously a huge development, which that is likely to draw considerable criticism considering how self-serving and one-sided a move it appears to be. Many college coaches opposed giving their players such a long period in which they were able to evaluate their professional options because of the fact that it put their recruiting efforts (and thus, their jobs) in limbo until they made a final decision.

As Andy Katz pointed out on his ESPN blog, this essentially nullifies any chance underclassmen would have at evaluating their NBA draft stock because of the conflict between when the narrow window (this year--April 27th to May 8th) opens and the fact that most schools are still in session during that time.

Whats ironic is that, this year more than ever, a large number of very visible college basketball stars elected not to even test the draft watersillustrating how unnecessary it is to change the rules at this point, since the system is obviously working itself out just fine. What will likely happen next year is that far more players will be forced to jump head-first into the NBA draft waters, since there is no effective method in place that allows them to evaluate their chances of making a living in professional basketball.

Gary Parris of CBS Sportsline pens a very blunt assessment of John Walls apparent decision to not even inquire about his potential NBA draft eligibility.

John Wall must try to enter the NBA Draft.

That's not an opinion but a request to all who insist they care about the 19-year-old phenom, to the men and women who swear they have Wall's best interests at heart. If the nation's top-rated high school point guard can get in June's draft, he's good enough to be selected as high as second and marketable enough to receive sizable endorsement contracts, all of which could easily total 15 million guaranteed dollars (and perhaps much, much more). By my estimation, that's a lot of money.

So the people who claim to want what's best for Wall should acknowledge as much and convince him to declare for the draft before Sunday's deadline.

If the NBA rejects Wall's application, fine, he can go to college.

Parris goes into quite a bit of depth explaining why he thinks Wall and his camp are acting foolishly. He even goes a lot further than that, if you read between the lines, echoing the same thoughts many in basketball circles have expressed, that there is something a bit strange going on.

That's why the people advising Wall (like Brian Clifton, the former agent turned AAU coach) are foolish to not advise Wall to at least try to enter the draft. That, or they have ulterior motives and need him to go to college -- perhaps even a specific college -- for a year for some reason that is unclear (but feel free to speculate as you wish). There is no in-between. Clifton and the people of influence are either foolish or they have some vested interest in Wall enrolling in college.

Whats stranger is that even the NBA Board of Governors, in a meeting last week, has been forced to discuss the possibility that Wall might have a case, at least according to one NBA source with knowledge of the conversation.

The topic of whether Wall is eligible or not came up in the Board of Governors meeting last week, the source told us. They discussed that the language in the Collective Bargaining Agreement is ambiguous about 5th year prep players, and that it would make for an interesting debate that might be difficult to fight if it indeed came up. The thing is, Wall hasnt tried to put his name in yet, so its really not clear if it would come to that. Regardless, the board knows they need to clear up the language of the rule so it doesnt become a problem moving forward.

With Ricky Rubios enormous buyout with Joventut still unresolved, there is a pretty good chance that Wall could be the #2 overall pick in this years draft, as well as the recipient of a huge sneaker deal. Will Walls advisors really not even look into the possibility that he might be eligible? Something to keep in mind is, Wall is essentially in a similar situation to that of Brandon Jennings a year ago, as he is not yet eligible for college at this point. He continues to make official visits to colleges, though, and will be in Durham today to meet with Coach Mike Krzyzewski of Duke.

According to sources, Greivis Vasquez will officially announce hes entering his name in the NBA draft tomorrow, but will keep his eligibility intact for now by not signing with an agent.

Following up on our discussion from earlier this week, where we talked about the pros and cons of Wayne Ellington declaring, we had a number of well-connected sources reach out assuring us that its only a matter of time before the North Carolina junior puts his name in. Waynes dad has been on an NBA draft fact finding mission for pretty much the entire season, one source told us. I would be absolutely shocked if he didnt declare another said.

Apparently the holdup for both Ellington and Lawson revolves around the fact that they both no longer have the ability to test the waters after already having done so last season. In case of an emergency (an injury possibly) it makes little sense not to play it safe and wait until the deadline, which is what the two have reportedly been doing. Since many teams this year have decided to hold off on scheduling private workouts until after the NBA pre-draft camp in Chicago in late May, there might not be as much of a rush to start the process.

In other North Carolina related news, Tyler Hansbrough has officially signed with Jeff Schwartz of Excel Sports Management, the same agency that represents Blake Griffin. That means the two might get a chance to prepare for the draft together, in what would be a rematch of sorts of the NCAA tournament Elite Eight.