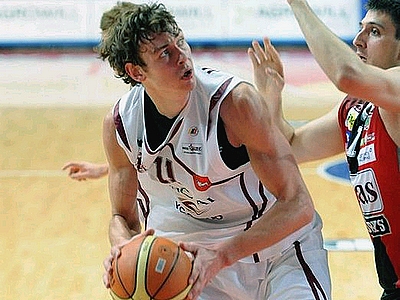 Jonathan Givony
@DraftExpress
The Nike Hoop Summit international team was officially announced by USA Basketball today. The game is scheduled for Saturday, April 11th at the Rose Garden, in Portland, Oregon. It appears to be a pretty strong group, with a couple of potential first round prospects and a clear-cut lottery prospect headliner in Donatas Motiejunas (pictured below).

NBA scouts and executives will have the luxury of being able to evaluate a good number of prospects in the week of practices and scrimmages leading up to the actual game, unlike the high-schoolers who they are barred from watching behind closed doors. Since many of the players on this roster dont see a great deal of playing time on their home clubs, and others play in hard to reach places reserved only for the most ambitious of NBA scouts, this is always a popular event amongst NBA decision makers considering how many high-level draft prospects tend to emerge from it year in and year out. Nikes Consultant of Global Basketball Rich Sheubrooks has once again done a great job bringing together a nice mix of well known and lesser known internationals from all corners of the globe, and had the following to say in the official press release:

"For the international players, this game opens their minds to different places and different people and cultures and, hopefully, also opens doors in terms of their professional careers," Sheubrooks said. "I think this year's team is one of our bigger teams. They are fundamentally sound and come from good basketball programs all over the world. Argentina brings toughness and passion, Europe brings ball skills and fundamentals, while China and Africa bring raw talent and a great deal of potential."

Well be represented at the event once again by our very own Mike Schmidt, who will be present at all of the International and High school practices, scrimmages, and the actual game.

Three players from the lower LEB divisions of the Spanish league will be present, on loan from their respective ACB clubs. Naturalized Spaniard Mamadou Samb (brother of New York Knick Cheick) is having an excellent season with Barcelonas farm team Cornella, while Argentinean Matias Nocedal recently was shipped by Tau Vitoria to CB Vic, where he comes off the bench. Greek combo guard Nikos Pappas plays for Real Madrid II (4th division) despite being the property of Bilbao, and is struggling through a tough rookie season in Spain.

Two French players will be attending as well, following the tradition established by the likes of Nicolas Batum and Alexis Ajinca. Kevin Seraphin has been profiled on this site in depth over the last few months, and will be fascinating to watch in his week in Portland. Edwin Jackson is also a well-known player, an extremely athletic scoring guard currently seeing big minutes in the weak French second division.

It wouldnt be a true International event without a couple of players from the Balkans, and Nike was able to land two very well known prospects from there. Milan Macvan comes with a hefty resume, being the go-to guy of the Serbian national teams that won the U-18, U-19 and U-20 European championships, as well as the Euroleague Junior tournament in Athens in 2007. Hes getting huge minutes at the senior level on a quality team in Hemofarm, who already qualified for the EuroCup Top 8 in Turin to be played just a week before the Hoop Summit.

On the other hand we find Croatian Tomislav Zubcic, an athletic power forward who likes to face the basket but has seen preciously little playing time this season in Cibona, fresh off a terrific showing in the Euroleague. Coach Perasovic wanted to keep Zubcic around in order to work with him individually on a daily basis, and it will be very interesting to see how he looks compared to the last time we saw him in Dallas this past summer.

The main draw for scouts will be getting another up-close look at Lithuanian big man Donatas Motiejunas, who was smart enough to insert a clause into his contract this summer allowing him to leave his team in case he was invited for this event. Motiejunas is putting up huge numbers on a bad team in his domestic league, where he averages over 20 points and 7 rebounds per game in just under 30 minutes. The 1990-born player has a rare combination of size, skills and athleticism, and was named the MVP of the U-18 European Championships this past summer. Hes not expected to declare for this years draft, but a strong showing at the Hoop Summit against the cream of the crop of American high school basketball could possibly change his mind.

For Team USA this is, as usual, a whos who of top shelf high school senior prospects. The roster took a minor hit when arguably the top player in AmericaDerrick Favorselected to pull out due to personal reasons, only to be replaced by the controversial Renardo Sidney, who is an unlikely candidate to don the USA basketball uniform. John Wall, Xavier Henry, John Henson, DeMarcus Cousins and Abdul Gaddy look like the headliners early on, and its interesting to see that the organizers decided to fill out the roster with a number of role-players, such as Mike Moser and Leslie McDonald, rather than add more star power to the mix. Feel free to delve through the profiles of the players listed below, as most all of them have been evaluated in depth and will get another thorough look from us in Portland.
Read Next...