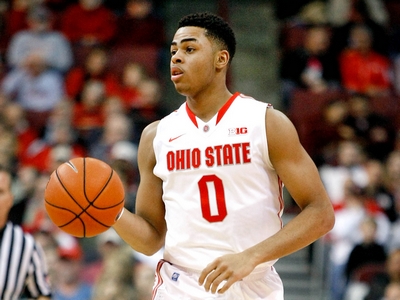 DraftExpress
@DraftExpress
The ability to create offense is one of the most valued and important skills in basketball. With the rise of video services like Synergy Sports Technology, and tracking data provided by SportVU, advance scouting has made NBA half-court defenses a precise science, which only the most talented players in the league can crack on a consistent basis. Typically, these players impose their will on the opposition in pick and roll, isolation, and transition situations with an elite blend of athleticism and skill that allows them to keep their team's offense running smoothly and ensures their teammates get the kind of looks they need to accentuate their strengths and hide their deficiencies.

Look no further for the importance of shot-creation than this year's NBA Finals, where virtually every single point scored by the Cleveland Cavaliers came by way of LeBron James shots, passes or free throw attempts and Andre Iguodala's ability to limit the offense James created earned him MVP honors. While this is obviously an extreme example, and partially due to difficult circumstances Cleveland found itself in because of injuries, many NBA team offenses are fueled almost exclusively by the wizardry of their primary shot-creators.

Golden State's Finals triumph might cause some coaches to rethink things, as quite a bit of their scoring came through their superb spacing (aided by having five shooters on the court at the same time), ball-movement and team play with a motion offense that was often the complete opposite of what the Cavaliers were running. Still, you won't find many NBA teams that have the personnel to play this way on a consistent basis, and many of the most important (and memorable) moments of the Finals came on isolation plays run by Steph Curry.

At the college level, shot creation takes on a different meaning as the long shot clock results in terms relying less on freelancing and pick and roll play. Part of that is out of necessity, due to the extreme contrast in talent disparity compared with the pro game, and some of that is due to the overly controlling nature of NCAA head coaches. With that in mind, let's take a look at some of the best shot-creators in the 2015 NBA Draft, with an eye on the 2014-2015 NBA season as a comparison tool. Obviously, it is difficult to compare apples-to-apples here, but we've done our best to account for the differences in paces and playing time by adjusting for both when possible.

Points Per-40 Minutes Adjusted for Pace
Anyone can go out and fire away without conscious when they're given the green light, but if that strategy doesn't prove to be effective for winning games, there is little doubt that the player's teammates and coaching staff will quickly pivot away from it. Because of this, it isn't surprising that the highest volume shot creators in the league rank among its top per-minute scorers and post strong efficiency numbers as well. Quality of competition and role obviously play a significant role in both productivity and efficiency at the college level, but NBA teams can always use a player who can put the ball in the basket. In parentheses, we've included each player's true shooting percentage.

Points via Assist Per-40 Minutes Adjusted for Pace
While per-minute scoring is an interesting stat, it's a more general measure of productivity and tells only a fraction of the story of shot creation. Some players can take over a game in the scoring column by making plays for others. We saw a prime example of that in the Cavaliers' two playoff victories, as LeBron James generated a significant portion of Cleveland's points with direct passes.

Among the NBA leaders in points created per-40 minutes via assist, each player scores the ball prolifically as well, as keeping the defense honest is a critical skill when creating shots at the NBA level. While the offensive systems and teammates these prospects played in and with contribute to their ability to generate offense via assists, there's something to be said for their vision and passing ability.

Notre Dame's Jerian Grant spearheaded one of the most impressive offenses in all of college hoops with his ability to find the open man. Delon Wright and Tyus Jones rank among the less effective scorers per-40 minutes among top guard prospects in this draft, but showed a willingness to fill a role and facilitate for their talented teammates.

In parentheses, we've included how many of the points (off assists) were generated in transition, since tempo can be an important aspect of shot creation‏.

Isolation Points per-40 Minutes Adjusted for Pace
This stat tells us a bit about the different prospects' role on their former team and how frequently, in plain terms, they created their own shot and scored in isolation situations. These players were able to freelance liberally on the offensive end, and their ability to take the ball out of their team's set offense and find a way to score, whether it be by getting all the way to the rim or creating separation for pull-ups, is part of the reason why they're so highly regarded. The challenge for any prospect from a shot creation perspective is translating their ability to get buckets to the NBA level against far superior defenders. The League's best one-on-one shot creators all grew into prominent offensive roles, some far faster than others, as earning the trust of teammates and coaches as an isolation threat is often a gradual process. It is also interesting how many of the NBA's most prolific isolation scorers are big guards or small forwards, as elite physical tools seemed to be a pre-requisite for inclusion on this list last season. We've included each player's isolation points per-possession mark in parentheses as a gauge for efficiency. Cameron Payne looks impressive here by any standard, even if naysayers would point out that he did this against the 208th ranked strength of schedule defense according to KenPom.

Isolation Points per Possession
This stat looks at the players who scored in isolations situations most efficiently last season. Some players aren't as heavily relied upon offensively as others, and while teams at the top of the draft are often looking for a player than could carry the load for them offensively in the future, there's value in a roleplayer who can exploit mismatches and take advantage of opportunities to create for themselves when they arise. This postseason, players like Shaun Livingston, Harrison Barnes, Austin Rivers, and C.J. McCollum all made a number of timely plays in isolation situations when their team's star players were on the bench. Obviously their respective teams aren't dependent on their ability to create for themselves to win games, but in many cases, a few key baskets can be the difference between a win and a loss. The number of isolation possessions each player used per game can be found in parentheses.

Pick and Roll Points per-40 Minutes Adjusted for Pace
The proliferation of the pick and roll as staple of NBA offenses places a premium on the ability of a player to score in the two man game. The league's top guards score around a third of their points per game handling the ball in the pick and roll, albeit at varying levels of efficiency. As is the case with shot creation in general, the varying degree in the level of competition of our sample of draft prospects hampers our ability to make a real apples-to-apples comparison. Cameron Payne was outstanding in the OVC in both one-on-one and pick and roll situations, but was clearly in better position to create for himself against the less athletic competition he faced on a nightly basis. Even so, the per-minute productivity of our sample of prospects pales in comparison to that of the top NBA guards, as NBA teams fall back on high level shot creators far more frequently than their college counterparts. The number in parentheses is each player's points per possession as the ball handler in the pick and roll.

Pick and Roll Points per Possession
Even the lower usage guards in the NBA tends to find themselves involved in the pick and roll frequently when they're on the floor, unless they strictly play alongside another high level shot creator. This metric tells us how efficient these players were as scorers dribbling off of ball screens, regardless of usage. The NBA's most prolific pick and roll scorers tend to score the ball at an efficient level, but there's obvious value in a lower usage backup guard who can make plays in the two man game. Among prospects in this draft, Tyus Jones scored the ball at an especially efficient level, despite his somewhat low usage, which is part of the reason so many analysts project him as a potentially elite backup at the next level.

Pick and Roll Points via Pass Outs per-40 Minutes Adjusted for Pace
This stat looks at the other side of shot creation on the pick and roll. As many points as players score in the two man game, the league's elite guards generate more points per 40 minutes with their passes out of the pick and roll. Teams that have shooters at multiple positions can benefit greatly from a ball handler who can force the defense to react dribbling off of ball screens and find the open man.

Transition Points per-40 Minutes Adjusted for Pace
Though isolation and pick and roll situations tend to be the lightning rod for teams creating shots and defensive movement, arguably the most dynamic shot creator in the league for a large portion of last season, Russell Westbrook, had one of the most productive seasons in recent memory. This stat shows us just how productive these players were pushing the ball themselves and getting easy points in the open floor. The best way to avoid matching up against an elite half-court defense is to simply get a shot off in the early offense before they have a chance to set up. While Westbrook did the vast majority of his damage as a ball handler racing his way to the rim, his counterparts at the college level, Booker and Russell, also did a significant amount of damage running to the 3-point line. There's more than one way to make the defense pay before its set, and players that can do so consistently get a nice boost in the scoring column.

This last ranking is entirely subjective, and takes into account everything we discussed above, as well as additional factors like size, level of competition, role on their team and age, which could leave room for future improvement. After all, it's difficult to compare D'Angelo Russell or Tyus Jones generating the stats they did as 18-year olds with what Delon Wright and Jerian Grant did at age 22. After all, we can only guess what Russell or Jones might have been able to accomplish with another four years of experience underneath their belt.

NBA teams will also look at other components when ranking prospects in the draft as a whole, specifically defense, which is a crucial element we did not discuss that will play a huge role in whether many of these players will even see the floor at the NBA level.

More-so than easily measured skills like shooting or finishing, shot creation is a bit more of an abstract concept. Players who can create their own shot and do so efficiently as a first or second option aren't easy to come by, which will make it fascinating to see how this group fares in the coming years.
Read Next...