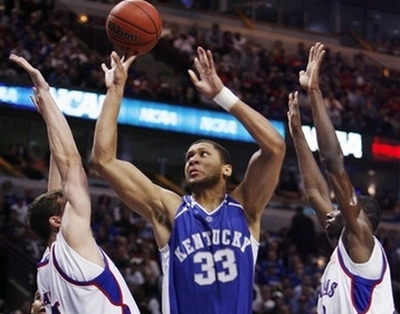 Jonathan Givony
@DraftExpress
Following the resigning of Kentucky Head Coach Tubby Smith, 6-11 Junior Randolph Morris has decided to leave Lexington to sign with the New York Knicks. The Kentucky Wildcats were blindsided by Morris for the second time in two years, as he apparently did not bother to inform them of his intentions. My understanding was that he is going to wait until a new head coach is hired to make a decision, a representative of the Kentucky Sports Information Department told us earlier today. This move exposes a massive loophole in the NCAA rule book that allows underclassmen to declare for the draft and become NBA free agents with their NCAA eligibility still intact if they go undrafted, and could have huge implications on the thought process of when college players decide to enter their name in the draft.

-What better way to circumvent the NBAs rookie salary scale? Any player drafted in the first round is bound to a 2-4 year rookie contract ranging from over 18 million dollars for the #1 pick to four million dollars for the last pick in the 1st round. That is assuming that the team decides to pick up the option they have on the 3rd and 4th years of the players contract.

-Certain college players would surely be able to garner much more on the open market if they were allowed to negotiate with all 30 teams rather than just with the team that drafts them. Lets just take as an example a player that almost certainly would have went undrafted had he decided to keep his name in the draft following his freshman seasonDeron Williams, formerly of Illinois and now an all-star caliber point guard with the Utah Jazz. Had Williams came out following his ho-hum freshman year, where he averaged 6.3 points and 4.5 turnovers, he almost certainly would have went undrafted, as he was out of shape and not considered particularly athletic. Little did NBA scouts know that he would go on to lead Illinois to the final game of the NCAA tournament in his junior season and parlay that into becoming the 3rd overall pick of the 2004 NBA Draft. If he was a free agent back then, rather than draft eligible, multiple NBA teams told us he would have garnered at least the mid-level exception for as long as his agent was willing to sign for. In other words, more than the 3.4 million starting salary that the #1 overall pick in the 2004 draft received.

-More importantly, players like Randolph Morris and their agents would be able to hand-pick the team they sign with, as well as the length of the contract. That is important not just for setting a player up to cash in on a mammoth second contract by putting them in a spot to get starting minutes right away, but also for marketing purposes. Its no secret that the sneaker companies and others would prefer to have their client in a market like New York City rather than Salt Lake City, so the endorsement deals a player lands could legitimately be an influencing factor in where a player signs. This is not going to be a factor for Randolph Morris, who many teams we spoke with are just not very high on at all, but its the precedent that could alter the draft process substantially.

-Imagine what would happen if a Dwyane Wade type prospect managed to fall through the cracks by taking advantage of this rule. Wade was ineligible to play at Marquette in his freshman season, and undoubtedly would have gone undrafted had he decided to enter the draft in 2001, something that he could have done under the rules back then or now. Two seasons later, he had already elevated himself into a top 5 pick, and another year at Marquette could have potentially made him one of the top free agents on the NBA market period, regardless of age. NBA teams are only restricted in the offers they can make by the amount of money they have under the salary cap, so if a team (like the Charlotte Bobcats) wanted to outbid the Knicks and offer Randolph Morris a max contract, they could.

-Again, its not so much the specific case of Randolph Morris that the NCAA and NBA should be worried about, but the precedent it sets for much better prospects down the road, under the rules that are currently in place.

-While the upside for a move like this is huge, the downside is also tremendous from the players perspective. The biggest risk an NCAA freshman considering a move of this nature needs to be concerned about is having this backfire on him by being drafted in the second round. That would end his college eligibility, force him in the NBA prematurely, and potentially damage his long-term earning potential if hes not able to develop by the time his rookie contract is up. NBA teams now have a terrific tool at their disposal in the D-League that makes them less concerned about taking a risk on a player who is obviously years away from being able to contribute, so from their perspective, anything they can get out of their 2nd round pick down the road is a bonus considering their extremely poor success rates historically. If the player doesnt pan out, theyll have no problem whatsoever cutting him in favor of the next project on the assembly line.

-That doesnt mean that mistakes arent going to happen. From our crude estimation, the average NCAA player is not equipped to weigh the possibility of long-term failure against the huge earnings potential in the short-term, which makes this loophole all the more dangerous. Furthermore, a 2nd round contract is still attractive enough for them to not be much of a deterrent, even if they could lose millions down the road if they fail to pan out. From what weve personally seen over the past few years from dealing with players, the incredible odds against becoming a star despite being drafted in the late 2nd round is not something that everyone can reasonably comprehend. Thats not going to stop certain agents from planting that seed in the impressionable minds of teenagers and their poor families, though, since they have nothing to lose and everything to gain.

-The intention of the NBA draft and the way its formatted is clearly to help bad teams get better quicker by allowing them to take their pick of the top eligible prospects, while the best teams sort through the scraps that are left over. This loophole has the potential to decimate that completely by putting every team in the league, regardless of position, on equal footing. If exploited correctly, what potentially could happen is a situation where the rich get richer, while the Atlanta Hawks of the world continue to suffer.

-While NBA teams might not be happy about the harsh new reality they could be facing, thats nothing compared to what this might do to the NCAA. The media made the Randolph Morris situation (leaving or staying?) a minor distraction for Kentucky this year, but that was only because he just wasnt that good of an NBA prospect to begin with. Any NCAA coach that allows an undrafted player to return to his team will be forced to deal with the constant possibility that his team could be upended at any given moment if that player were to decide to leave for the NBA. Since all 30 NBA teams will want to make sure that no one else is getting a leg up on a player that they might be interested in down the road, there could be constant scuttlebutt behind the scenes with teams inquiring as to the interest level of the player getting up and joining them in mid-season. There is currently no NBA rule in place to deter that from happening at any point in the year, whether its the day before the season starts, over the summer, or even during the Final Four. NCAA rules state that just the mere discussion between an amateur player and a professional team regarding a pro contract is grounds for loss of eligibility, so these conversations will have to occur behind closed doors, opening up plenty of room for unscrupulous activities.

-With that said, it can only be the NCAA that closes this loophole, and not the NBA. NCAA rules currently state that an undrafted player who did not hire an agent can petition to return to school within 30 days of the drafti.e. what will now be known as the Randolph Morris rulebut they can abolish it just as quickly as it was put in place. The rule has only been around for about five years now, so doing away with it is just a matter of getting the Division I Basketball Issues Committee to move their feet.

-Regardless of whether the rule gets changed or not, its almost certainly not to happen from today to tomorrow. The Early-Entry deadline is at 11:59 PM on April 29th, and this could be a major factor to take into consideration for players attempting to determine whether to enter their name in or not, particularly since the loophole could (and certainly should) be closed after this years draft.

-NBA teams will have to examine the early-entry list more closely than ever, and be aware of players who might try to help themselves go undrafted, by faking an injury, avoiding the pre-draft camp, turning down workouts, or anything else they can do to not get picked. If we ever need any more reason to get us riled up about the multiple storylines that the 2007 draft will hold, another one just presented itself.
Read Next...