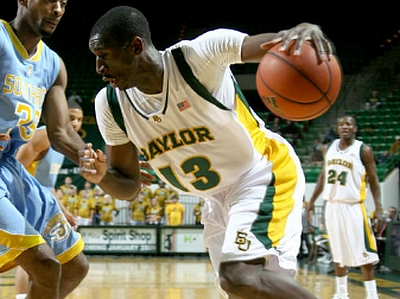 Kyle Nelson
@KNelsonDX
We take a look forward at this week's TV schedule to pick out the games and NBA prospects well be watching intently this coming week.

Do not miss the opportunity to watch Georgetown big man Greg Monroe and Syracuse swingman Wesley Johnson take the floor in one of the Big East marquee match ups. Will Johnson be able to create offense off of the dribble against the Georgetown zone? Similarly, will Monroe be able to take advantage of his size and skill? Scouts will be watching these two future first round draft picks, a match up that could be of particular interest if the two players see minutes at the same position.

At 15-4, Florida State has not had the most impressive season and is searching for a marquee conference victory. Duke is coming off of a disappointing loss to North Carolina State and has not yet shown the consistency of a championship contender. Be sure to watch Duke point guard Jon Scheyer and combo-forward Kyle Singler, players who are proven collegiate stand-outs, but have yet to consistently perform against teams with NBA size and athleticism. Enter Florida State, an underrated team with three legitimate NBA prospects: center Solomon Alabi, combo-forward Chris Singleton, and freshman wing Michael Snaer. All of the prospects in this game have something to prove and on national television, should have every opportunity to step up to the occasion.

Both Iowa State power forward Craig Brackins and Oklahoma combo guard Willie Warren were projected as lottery selections before the beginning of this season, but both have had disappointing seasons, thus far. Consider this game a gut check for both teams. With scouts watching, it would serve both Brackins and Warren, not to mention their teammates, to snap out of their losing ways and play up to their potential.

While this game may be difficult to catch without extended cable packages, there is no denying the fact that this weeks marquee match-up is between two future lottery picks, Wake Forest combo-forward Al-Farouq Aminu and Georgia Techs freshman phenomenon Derrick Favors. Also, do not miss a chance to see Wake Forests potential-laden freshmen Ari Stewart and C.J. Harris, not to mention a peaking Ishmael Smith. For Georgia Tech, Gani Lawal and Iman Shumpert are well worth watching, as well. Both teams could badly use a win and, given Georgia Tech and Wake Forests similarities and up-tempo style, this game should not disappoint.

Duke and Georgetown are two of the nations most storied college basketball programs and are experiencing resurgence this season. While television appearances are not lacking in the least for either team, consider this game an opportunity to see two teams with very different styles and a plethora of prospects from across the spectrum. Of course it will be interesting to see Greg Monroe take on Dukes loaded front court, primarily Miles and Mason Plumlee, but consider this an essential test for both teams fringe prospects. Dukes Nolan Smith and Jon Scheyer have the perfect opportunity in match-ups against Georgetowns talented, yet underachieving, back court, Chris Wright and Austin Freeman. Both of these teams seemed poised to make a run in March and this game should be a solid test and an opportunity for scouts to evaluate a wide-variety of prospects.

Vanderbilt has won nine straight games and is tied with undefeated Kentucky atop of the Southeastern Conference standings. Do not miss this opportunity to see Kentuckys John Wall, Eric Bledsoe, Patrick Patterson, and DeMarcus Cousins, one of the most interesting and talented starting lineups in the country, as well as one of the most dangerous. Vanderbilt will not lose without a fight, however, as they boast sophomore swingman Jeffrey Taylor and center A.J. Ogilvy, two of the SECs most consistent performers and legitimate NBA prospects in their own right. Can Vanderbilt pull out an upset on Kentuckys home floor? Consider this game a must-see.

Oklahoma State swingman James Anderson has been on NBA scouts radars since he was a freshman, but he has yet to prove himself as more than a shooting specialist on a consistent basis. He cannot be one-dimensional if Oklahoma State expects to upset Texas, a balanced team with more than its share of NBA-caliber talent, looking to rebound from two road losses. In fact, there are few players in the rotation that arent considered at least marginal prospects from an NBA perspective, from Avery Bradley and Jordan Hamilton on the wings to Damion James and Dexter Pittman down low. This should be a battle, to say the least, with much at stake in the greater NCAA, not to mention NBA Draft, picture.

Texas is one of the best teams in the country, but they will be tested nonetheless when 15-3 Baylor arrives. On the perimeter, LaceDarius Dunn is finally regaining the touch that put him on scouts radars as a freshman and undersized point guard Tweety Carter is finally living up to the immense high school hype that accompanied him to Waco. Power forward Ekpe Udoh is exceeding all expectations, as well, to the tune of 14.3 points, 10.8 rebounds, 2.7 assists, and 4.4 blocks per game. Scouts will be watching to see how the big man plays against Texass talented frontcourt on both offense and defense in what might be his most significant challenge of the season.

12.4 points, 9.4 rebounds, and 5.4 blocks in 25 minutes per game. Marshall freshman Hassan Whiteside has more than exceeded expectations during his freshman season, leading the NCAA in blocks and providing scouts with an intriguing profile. There are not many chances to catch Marshall on television, and this game should be a spectacular opportunity to watch one of the nations best freshmen against good competition. For Memphis, combo-guard Elliot Williams must take advantage of having NBA scouts and personnel in attendance to prove that he is a more polished prospect than people are currently giving him credit for. The same goes for swingman Wesley Witherspoon, who has a tantalizing combination of size and skill, but must prove to scouts that he can be consistent.

This battle between Mountain West Conference heavyweights is interesting from an NBA perspective because of the opportunity to see two intriguing mid-major juniors: New Mexicos versatile combo-forward Darington Hobson and BYU point guard Jimmer Fredette. Neither player is considered to be top-shelf prospects at this point, but they can continue to keep scouts interested with positive showings in match ups such as this one.

There are two intriguing match ups at play in this Atlantic-10 challenge. In the post, LaSalle freshman Aaric Murray and Temple junior Lavoy Allen are versatile big men who should give each other fits with their inside-outside games. On the perimeter, it is a contest between two combo-guards. LaSalle senior Rodney Green has been a marginal NBA prospect for a couple of seasons, but he will have the opportunity to prove himself against Juan Fernandez, a sweet shooting guard from Argentina who has taken significant strides this season.

Charles Garcia emerged this season as one of the most enigmatic and intriguing freshmen in the country, but has come down to Earth since his spectacular start. He will have the opportunity to play against the team that recruited him before mysteriously reneging on a scholarship offer. Considering the recent tension hes seen with head coach Cameron Dollar and the fact that he is 21 years old, this may be one of his last chances to impress against legitimate competition in scouts presence. Seattle will have their hands full as they face a Washington team reeling after losing five of their last seven games. Garcia will have the opportunity to match up with Quincy Pondexter, Washingtons senior combo-forward, who is still one of the top prospects in the PAC-10 and looking to assert himself in front of scouts despite struggling somewhat in conference play.
Read Next...