U-20 European Championship: Three-peat for Serbia 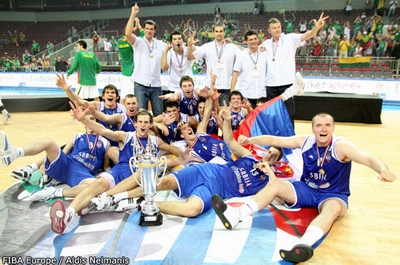 Luis Fernández
@DraftExpress
DraftExpress attended the recently finished U-20 European Championship held in Riga, Latvia. Here we give you an overview on the most interesting stuff and players seen during the tournament, headlined by the Serbian triumph, their third consecutive European title at this stage.

Logic prevailed this time and Serbia clinched gold, capitalizing on the strongest roster among the U-20 Championship (unlike what had happened with the junior squad), and extending the winning streak at this age group to three titles now.

3389
In todays competitive environment (no united Yugoslavia anymore, and even the recently independent Montenegro sneaked to the fifth position), its certainly a tremendous achievement, that could even be extended for a few more years given the quality of the generations following the 1988/89 one.

No team featured the strength, depth and balance of the Serbian squad, and perhaps only lacked a reliable back-up point guard (the theoretic starting playmaker, Stefan Markovic, was promoted to the senior national team).

The Serbian dominance was clearly built from the frontcourt. Barely anybody could match the combined power of Miroslav Raduljica, Milan Macvan and Boban Marjanovic, a true wall for most opponents, who just didnt have the size and strength to battle them.

The perimeter was a nice complement to that outstanding inside game, and they didnt even need to bring the best out of them. Perhaps the most intriguing performance came from Marko Keselj, surprisingly consistent all tournament long, providing excellent size (as if they didnt had enough), athleticism and perimeter firepower to the Serbians.

3390
Whenever the Serbian backcourt didnt particularly shine in the scoring department, they all provided nice accuracy from the perimeter in order to make the inside guys work even easier.

Finally, talented point guard Dusan Katnic -with the invaluable help of Milan Macvan from the frontcourt- was in charge of making the offense run smoothly.

Many interesting players to feed the European scene and the Serbian senior National Team for years to come. With so many titles at these categories, it would be really concerning if more Serbian stars didnt start blossoming soon (they are suffering an unprecedented drought in recent years), so they can avoid embarrassing defeats, like the one recently suffered against Iran, and bring this country back to where it belongs basketball-wise.

Nobody dominated like Miroslav Raduljica, and therefore he was rewarded with the MVP award. It was one of those unanimous calls, an extremely productive guy (the best rebounder in the tournament) who was just the main reason for his team winning it all. And still, you could feel it was almost unfair.

Lets see, they guy is around seven-feet tall, very strong, athletic and mobile (also smart and nicely skilled), and he was never challenged by anybody anywhere close to his size and strength. It was a man playing against boys.

3391
Actually, Raduljica only struggled facing French center Ludovic Vaty. At least a couple of inches shorter than him, however Vaty is massive, enjoys a nice wingspan and stayed very aggressive on the Serbian, particularly being physical and using his hands to actively look for the ball. It was good enough to significantly slow him down, helping to demolish the Serbian game plan, which brought about the only Serbian loss in the entire tournament.

Anyway, you cant blame a basketball player for being bigger than anybody else, because basketball is also about this. We just can suggest Raduljica to keep working really hard on his game, because some of the stuff he does wont cut it against comparable opponents, which hell find on a regular basis at the pro level.

3392
Hands down the best guard at the competition, Martynas Gecevicius led Lithuania to the silver medal with another outstanding exhibition of his perimeter stroke. The guy is just a world-class shooter in the making, the best shooting prospect you can find in Europe (he even outclassed Mladen Jeremic in this event, another superb gunner).

Gecevicius just fueled the top scoring team in the tournament, a Lithuanian squad displaying an offensive-oriented game that relied on the excellent skill set of its players (perhaps topping the championship in this regard).

Meanwhile, two guys on the all-tournament team for bronze medalist Spain seems a bit of a reach. Joaquin Colom didnt have much opposition to claim honors from the backcourt, and despite his long-range shooting struggles, his ability to run the Spanish offense (he came up on top of the tourney assist-ranking with 6.1 per game) was nicely rewarded.

It was a bit more surprising to see Victor Claver making the team instead of Milan Macvan, even if we consider that the poll took part before the final. The Spanish forward, although extremely helpful and efficient, played a smaller role for Spain than he had enjoyed at junior stage back in 2006, and was nowhere near the catalyst Macvan was for Serbia.

Finally, Vladimir Dasic was a lock here, indeed the only player able to challenge Raduljica for the MVP award, top scorer overall, and the biggest individual story at this championship.

3393
You really have to give him credit for leading Montenegro that far in the tournament (they were extremely close to making the semifinals). Probably no player in the championship was more important for his own team than Dasic was for Montenegro. At times, he was his teams conducter, and always the guy in charge of getting them rolling, delivering monstrous first quarters. You could feel his great motivation and energy on the floor, although he was also a bit selfish at times, even getting angry as his teammates if they didnt feed him the ball enough.

As usual, the top players from this age group didnt participate, either because theyve already been drafted and thus focused on the NBA summer leagues, or just because they have already joined the senior national teams. Danilo Gallinari, Nicolas Batum, Omri Caspi or Alexis Ajinca can be counted among the most noticeable absences.

Besides, there wasnt any big-time find, not any top prospect emerging in this setting to feed the upper parts of our rankings. The most intriguing players draft-wise are all well-known by our loyal readers: the aforementioned Vladimir Dasic and Victor Claver, Alexey Shved, and especially, Donatas Motiejunas.

3394
Alexey Shved would complete a trio of intriguing-but-questionable high-potential players with Claver (lacking some serious mental strength and character) and Dasic (struck between the forward positions). In Shveds case, to his superb size and skills from the point guard position, you have to consider as well his individualistic style and troubled character. Sometimes you wonder if the word teammate is anywhere in his dictionary.

Closing with the top prospect seen in Riga, after winning the MVP award at the U-18 European Championship, Donatas Motiejunas reported mid-way the tournament to help Lithuania into the semifinals with increasingly solid performances, ending up with excellent outings in the decisive games, where he showed his impressive skill-set against significantly stronger (and obviously older) competition.

We'll deal these player and many more in upcoming detailed reviews.

When comes to disappointing performances, we have to start with Russia-- soft, disinterested, anarchic, coming up with an extremely poor display for such a talented team (especially in the backcourt). Nothing new from this country as of late in the youth categories.

Although faring a lot better, France wont be happy as well. Despite missing Nicolas Batum, Alexis Ajinca and Rodrigue Beaubois, they had probably enough material to advance to the semifinals, but suffered severe collapses against a three-point happy Latvia and Spain. With Antoine Diot still as a single-paced point guard (can only go fast), and without other reliable options in the backcourt to lead and create offense, they were prone to suffer offensive jams. Still, it was one of the premier squads physically speaking. As usual.

Speaking of physical attributes, we could see a new guy in the French squad that was pretty impressive in this department. Kevin Seraphin, a 6-9 inside player, built like a house, pretty athletic, with a decent shooting touch, although still raw. He plays for Cholet, and hes born in December of 1989, meaning that hes almost an U-18 player. A guy to keep on the radar.
Read Next...