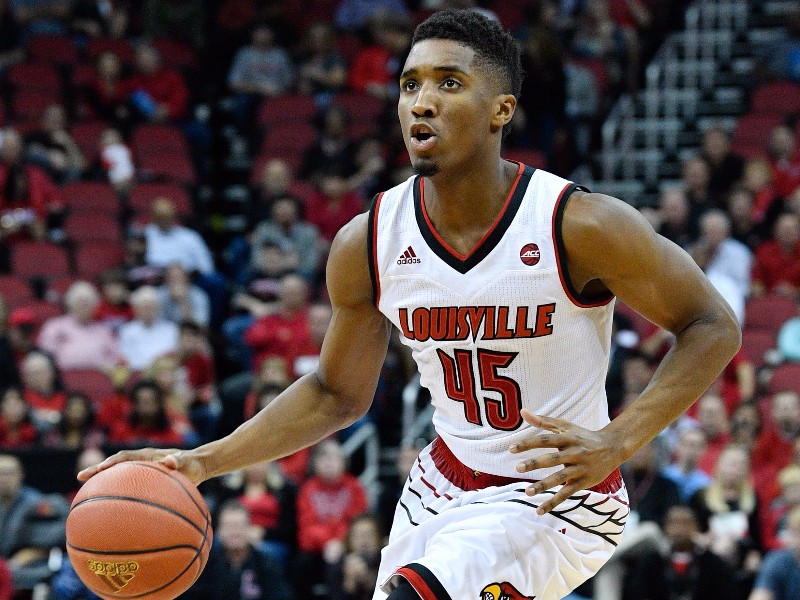 A late bloomer in high school, who saw his college recruitment take off towards the end of his junior year, Donovan Mitchell had an inconsistent freshman season at Louisville, coming off the bench and operating mostly off the ball. He made a big leap as a sophomore, blossoming into a First Team All-ACC and All-Defensive Team member, stepping into a go-to role for Rick Pitino, especially once his starting point guard Quentin Snider was forced to sit out six ACC games with an injury.

Mitchell's ascension continued at the NBA Draft Combine, where his stellar measurements, athletic testing numbers, 3-point shooting (in drills), and interviews propelled him into top-20 draft pick and potentially even lottery status.

Standing just 6'1 ¼ without shoes, Mitchell has less than ideal height for a NBA shooting guard, but compensates for that with a gigantic 6'10 wingspan, a chiseled 211 pound frame, and tremendous athleticism that allows him to play much bigger than his size. He's got great speed and body control in the open floor, and is a big time leaper off two feet, posting a 36 ½ inch no-step vertical at the Combine.

Mitchell's physical tools give him significant potential as a scorer in both the half-court and in transition. He is both shifty and powerful changing gears with long strides and the type of frame that can absorb contact en route to the basket, even if he's yet to fully harness this into a consistently efficient weapon. He covers ground impressively, and has the length to finish creatively around the basket, often mixing in spin moves.

Mitchell is almost exclusively a two-foot jumper, needing time to gather inside the paint and in turn losing a lot of his explosiveness on his drives, especially when forced to his weaker left hand. He doesn't get all the way to the rim as frequently as you might hope, as evidenced by his low 2P% (46%) and pedestrian free throw rate (4 attempts per-40), especially when operating against better defenses.

Continued skill-development will go a long way in unlocking Mitchell's potential as a creator in the half-court, as he's still working on making the full-time transition from the wing to the combo guard spot. He made strides with his ability to find the open man off simple drive and dish and pick and roll plays as a sophomore, but still plays too sped up at times, not always reading the floor and making the simple play, and lacking the height or exemplary court vision to see over the top of the defense with bigger opponents guarding him.

One area that Mitchell made significant strides in as a sophomore was as a perimeter shooter, more than tripling the amount of 3-pointers he made as a sophomore (even accounting for minutes played) while seeing his percentage rise from 25 to 35%. His mechanics are sound, with great balance, footwork and rise on both his pull-up and spot-up jumper, and he seems to have the potential to continue to improve in this area, especially when asked to play a more compact offensive role, with better shooters and spacing around him.

Mitchell is nevertheless a shot-maker who impresses you with his ability to elevate sharply off the ground and create space from opponents off of crossovers, step-backs and hang-dribbles. He also catches and shoots on the hop in a fluid motion, and hit a strong 81% of his free throws as a sophomore.

With that said, Mitchell was a very streaky shooter in his time in college, due to his less than stellar shot-selection. He has a tendency to settle for tough, contested pull-ups with a hand in his face a lot more frequently than you might hope, partially due to his lack of polish as a slasher, but also because of his average decision making skills. While he can make some of these attempts, at times in highlight reel fashion, this is a difficult way to make a living and something that dragged down his overall offensive efficiency significantly all season.

Perhaps the most appealing part of Mitchell's profile, particularly early on in his career, lies on the defensive end. Two years under Rick Pitino has benefited him greatly in this regard, as he's emerged as a multi-positional stopper who a coach can sic on point guards, shooting guards and even some small forwards and expect results. Mitchell has outstanding physical tools to get the job done, with his elite length, chiseled frame and quick feet, but also the mentality, as he's a highly competitive guy who is willing to pick up full court, get on the floor for loose balls, and generally make life difficult for opposing players. Mitchell has outstanding instincts off the ball, as evidenced by his 2.6 steals per-40 (#1 among all DX Top-100 prospects). Despite not possessing great height, his 6'10 wingspan is very difficult for opposing guards to shoot over, and he does a great job of getting underneath defenders, sliding his feet and using his strength to contain the ball.

Mitchell's intangibles are very attractive as well, and will likely give NBA teams confidence in his ability to continue to improve and reach his full potential. The strides he's made with his shooting mechanics over the past few years is a testament to the time he's put in working on his game. He's by all accounts a high character and very well spoken individual with a strong background, something that has reportedly shined through in private interviews he's conducted, according to NBA teams we've spoken with.

Mitchell has been one of the big risers of the pre-draft process early on, and it is not a surprise considering how trendy players in his mold are in today's NBA. He's got quite a few things to work on still, but also a strong framework to build off long-term.
Read Next...