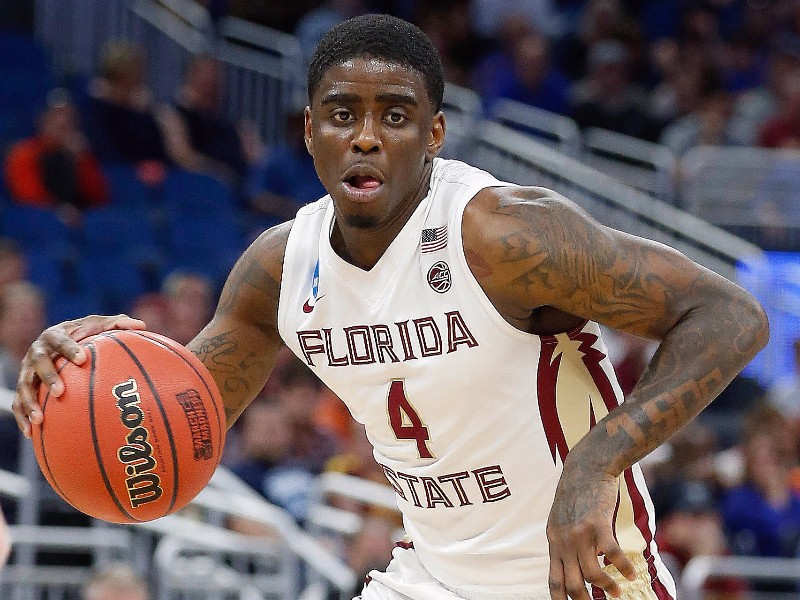 After a successful freshman season, Dwayne Bacon declared for the 2016 NBA draft before ultimately deciding to return to Florida State. Playing alongside a future top-10 pickin Jonathan Isaac, Bacon was able to showcase his offensive versatility and improve his efficiency from the floor. As a sophomore, Bacon held averages of 23.9 points and 5.8 rebounds per 40 minutes on a 55% true shooting percentage.

The intrigue is abundantly clear with Bacon as he certainly looks the part of an NBA wing. Standing 6'6.25 with a 6'10 wingspan he has the size and length to be an impact player on both ends of the floor at either wing spot. In addition to his natural size, Bacon possesses a physically mature frame that allows him to play bigger than his height suggests. He isn't overly quick or explosive, but does a terrific job of changing pace and is a handful to deal with when attacking downhill.

An aggressive scorer, Bacon has shown an ability to score in a variety of ways in one of the most grueling conferences in the NCAA, the ACC. Thanks to Florida State's ability to control the defensive glass, Bacon was able to showcase his knack for scoring in transition, where he shot 59.5% from the field and scored 1.2 points per possession. While not overly explosive, he is able to change his speeds and attack the rim, finishing with a variety of floaters and acrobatic layups, in addition to being very comfortable hunting pull up jumpers.

A major concern for Bacon going forward will be his ability to make perimeter jumpers at a respectable clip. As a sophomore, he connected on 33% of his 171 three-point attempts, a 5% rise from his freshman season. His jumper is solid mechanically, the only potential issue is his lack of elevation, which could make getting it off against NBA level defenders a bit of a concern. His free-throw shooting numbers suggest that he has the touch to be a reliable perimeter shooter, making 75% of his attempts from the line this past season.

Primarily a slasher in the half-court, Bacon does a good job of attacking closeouts and finishing off the bounce. Much like his ability in transition, he is able to get to the rim, but tends to rely on his pull up jumper. His ability to change speeds and use his solid frame in the pick and roll has proved valuable while at Florida State, as he scored 0.85 points per possession, which places him in the 73rd percentile among qualified players according to Synergy Sports Technology. Whether or not Bacon can consistently finish at the rim against NBA length remains to be seen, as he tends to settle for difficult, low percentage shot attempts, and plays mostly below the rim in the half court.

Although Bacon has the tools to be an efficient scorer, he lacks a certain level of basketball IQ to do so consistently. Tough shots are usually reserved for late in the clock, but not in his case, as he will hunt the first scoring opportunity that presents itself. Taking a number of long, early-clock mid-range jumpers is a very difficult way to make a living in the NBA, and is only compounded by Bacon's inability to create separation to have these attempts be less aggressively contested. He isn't the most elusive ball-handler, and lacks a certain level of quickness off the dribble that allows defenders to square him up and keep him in front, which is further hindered by his unwillingness to create for teammates, evidenced by his assist to field-goal attempt ratio of 0.12. Bacon, who will be 22 in August, needs to prove that he is willing to trust his teammates and must find a way to impact the game offensively without being a ball-dominant player.

When Bacon is engaged, and willing to sit in a stance, he can be a reliable defender, using his size and length to keep the ball contained and contest perimeter jumpers. He has the strength to check most wings, and may even be able to slide up to the four in bench lineups. Unfortunately, the effort level and focus needed to be an impact defender fluctuates from possession to possession. Mental lapses of over committing or being late to closeout, as well as simply poor closeouts has certainly hurt his image as a defender. For his career at Florida State, Bacon has averaged 1.4 steals per 40 minutes, a mark that, given his physical profile, is a bit underwhelming. To his credit, Bacon is a reliable rebounder, averaging 6.9 per 40 minutes in two seasons in Tallahassee.

Bacon is a scorer, with a scorer's mentality, and he will have to make jump-shots consistently to find a niche at the next level. Given his age (closer to that of a senior than a NCAA sophomore), Bacon will need to show a willingness to compete on the defensive end and take good shots since he isn't blessed with unlimited upside. If Bacon can accept playing with more of a role player mentality, he certainly has a chance to stick in the NBA given the need for capable wings in today's game. How he shoots the ball in workouts, along with his interviews and background intel should play a fairly significant part in where Bacon is selected in the 2017 NBA Draft.
Read Next...