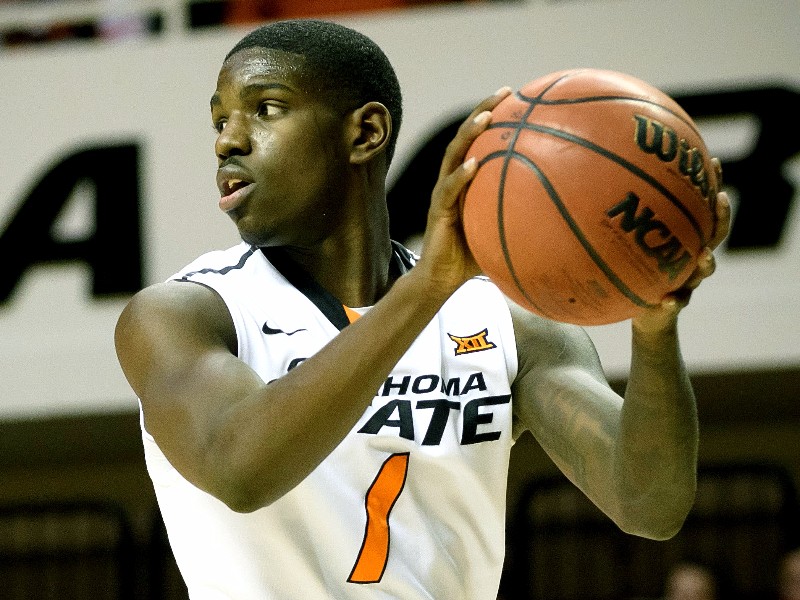 Jawun Evans led one of the most impressive turnarounds in college basketball this season at Oklahoma State. The Cowboys won six more Big 12 conference games than last season and earned a bid to the NCAA Tournament under new coach Brad Underwood (now departed for Illinois), losing to Michigan in the opening round in a close game. After averaging 25.9 points and 8.8 assists per 40 minutes and being named to the Big 12 All-Conference First Team, and seeing his coach depart to the Big Ten, Evans decided to forego his final two years of eligibility and enter his name in the NBA Draft.

Measured at just under 6'0 at the 2016 Nike Basketball Academy, Evans is one of the smallest players in our top 100. While he isn't an exceptional overall athlete, he plays bigger than his size by using his strength to absorb contact, and his listed 6'4 wingspan to help hold his own against NBA athletes.

Oklahoma State ran a pick and roll heavy offense with 56.3% of Evans' total derived offensive possessions (which includes shots, passes, fouls drawn, and turnovers) ending as the pick and roll ball handler according to Synergy Sports Technology. He showed that he is comfortable attacking the ball screen in a variety of ways, whether by rejecting the screen to get into the lane or forcing a switch to attack a big man off the dribble. He gets into space with a creative change of pace and impressive downhill quickness to bend the defense, and he should be able to seamlessly make the transition to a NBA style offense as he led the most efficient offense in the country primarily through his pick and roll attack.

Evans has little trouble getting into the lane off the dribble but has struggled to score once he gets there as his 45.3% 2-point field goal percentage ranked fourth worst among NCAA prospects in our top-100. He isn't afraid to attack the basket and challenge rim protectors, but hasn't found much success finishing from close range at the college level, as he converted just 47% of his half-court attempts inside the paint last season according to Synergy Sports Technology. His lack of size and just decent explosiveness are major issues here, and is something he'll have to work to overcome in the NBA.

Evans has started to develop other ways to score inside the arc as a sophomore doing a better job of using his body to absorb contact, and getting to the line 7.9 times per 40 minutes last season, seventh among NCAA players in our top 100. He has also become more adept at using floaters over the top of shot blockers, making a solid 46.2% of his 104 runners logged by Synergy Sports Technology.

Evans still has room to improve as a 3-point shooter, something that will be a major key at the NBA level considering his size. He made an impressive 41% of his three point attempts at the college level, but didn't take a large volume of them, as under 20% of his overall field goal attempts came from beyond the arc. He converted only 35% of the overall 163 jump shots logged by Synergy Sports Technology with the majority of these attempts being off the dribble shots (where he shot a respectable 38.7% on 111 attempts). His mechanics do not need a complete overhaul but he will need some tweaks to his form to be a respected shooter at the next level and be able to attack the defense in multiple ways. Most notably, he needs to do better at getting on balance on his pull-ups as he tends to sway sideways which hurts his accuracy, while also cleaning up his release point to create a more consistent shooting form. Evans' size will always be somewhat of a hindrance in terms of getting his shot off, so anything he can do to improve his accuracy will be beneficial considering how important this part of his game will be at the NBA level.

Evans is more than just a scoring point guard as he recorded 8.8 assists per 40 minutes, tops among NCAA players in our top 100. He can make all the right passes on the move to get his teammates involved and has a good feel for the game to decide when to pass and when to look for his own offense. Due to his size, Evans can get into trouble in traffic which can lead to turnovers. Evans is poised on the ball but will need to learn to play smarter against NBA defenders to limit his turnovers.

Evans will likely always be at a disadvantage defensively because of his physical tools but he does bring some nice things to the table that could help him contribute on that end. He is tough minded defensively and won't be pushed around easily with his strong frame. He works hard on the ball, moving his feet well to pressure his opponent and has quick hands and long arms (6'4 wingspan) to generate 2.3 steals per 40 minutes.

While he tries to make it as difficult as possible for his man leading up to the catch, opponents have an easy time shooting over him as they can catch and shoot over his closeouts or rise above him on pull-ups. He also doesn't have the elite lateral quickness and long strides needed to stay in front of dribble penetration and he lacks a high level of defensive upside and versatility that could prevent him from being a two-way contributor as a starter.

Never one to back down from a challenge, Evans will hope to join a list of six foot and under point guards who heard their name called on draft night including Tyler Ulis, Kay Felder, Isaiah Thomas, andShane Larkin among others. These types of players have an uphill to make an impact at the next level, but there is a strong precedent for success that Evans will be looking to replicate.

Evans' intangibles will go a long way in helping him, as he's universally lauded for his character and work ethic, which is often the difference maker in players in his mold.
Read Next...