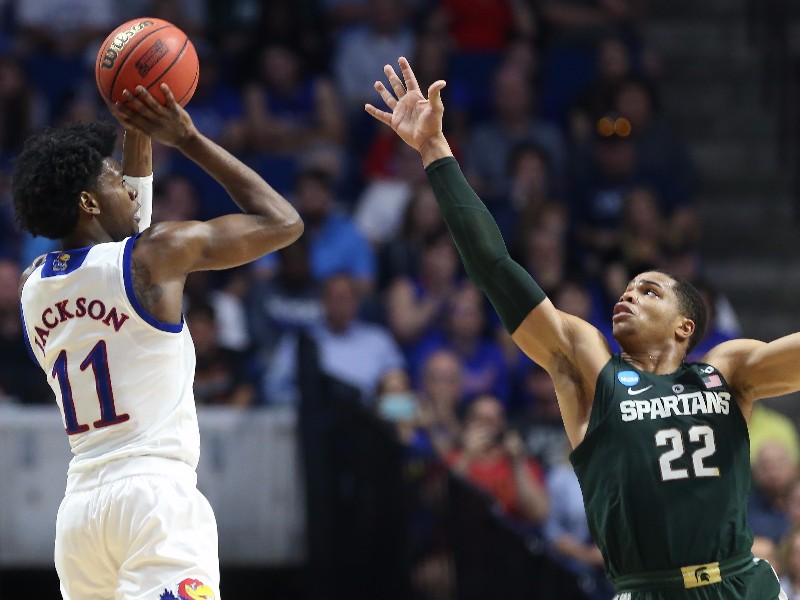 Jonathan Givony
@DraftExpress
Freshmen combo forwards Miles Bridges and Josh Jackson went head to head on Sunday, in what was arguably the best matchup of the weekend for NBA scouts to evaluate from a positional standpoint. Both players had strong showings.

Jackson and Bridges have been friends since the fifth grade. Bridges recruited Jackson heavily to Michigan State, but saw him end up commiting to Kansas over the Spartans (and Arizona, who were also heavily involved, which only increased the stakes of this matchup.

The two defended each other exclusively in their minutes on the floor at the power forward position. Both had very productive games-- Jackson with 23 points on 16 field goal attempts, and Bridges 22 points on 15 FGAs.

Jackson knocked down two of his five 3-point attempts, continuing his hot streak that has lasted more than two months now, in which he's hit 50% of his shots from beyond the arc. One move in particular stood out, a step-back 3-pointer out of a baseline iso, which demonstrated just how confident he's become in his shooting stroke as of late. Jackson also made some very smooth pull-up jumpers in the mid-range, showing his development in this area, while also exposing Bridges' lack of length that may hamper from seeing too many minutes at the power forward position in the NBA. Jackson was also impressive in transition, operating out of the post, and on straight line drives.

Bridges had an impressive game in his own right, showing the ability to score as a spot-up shooter, as well as off the bounce, making a contested pull-up 3 out of an isolation situation. His combination of strength and athleticism is very difficult for most college players to handle. He demonstrated his versatility by scoring out of the post, creating in the pick and roll, or as a cutter off the ball.

If Bridges decides to enter the 2017 NBA Draft as expected, he'll have gone out on a positive note. Jackson got the win and will continue onto the Sweet 16, where Kansas will face Purdue on Thursday.
Read Next...