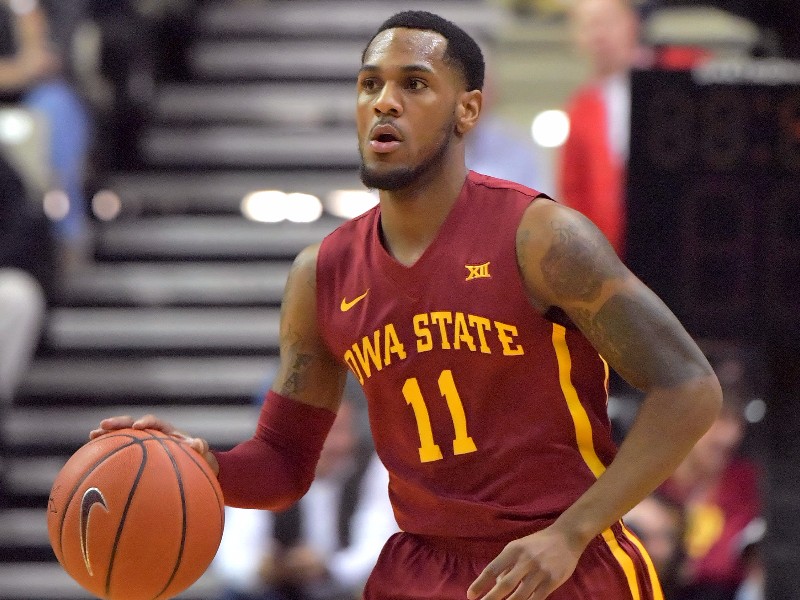 Monte Morris has been the catalyst of one of the most efficient offenses in college basketball, as he has led an Iowa State team that hasn't finished below 12th in offensive efficiency in his four seasons. After breaking into the starting lineup midway through his freshman season, Morris has emerged as one of the most successful Cyclone players in history with the school advancing to the NCAA Tournament all four years while setting numerous school records, including the new record for total assists and steals.

Morris has been a steady hand at the point guard position as he lead the NCAA in assist to turnover ratio in three of his four seasons (finishing fifth in his junior season), posting an impressive career mark of 4.65. He's done so in an NBA style offense, with 44.5% of his derived offense coming from play types where he has been the pick and roll ball handler, creating 1.0 points per possession as a senior which ranked 16th among the 108 players who have at least 10 such possessions per game as logged by Synergy Sports Technology.

Although Morris may not be the flashiest or most athletic prospect, teams are always searching for reliable point guards who can initiate an offense, especially one built around ball screens. Measured at 6'3 with a 6'5 wingspan, he has adequate size for a point guard, but isn't an imposing prospect, as he will need to significantly bulk up his skinny 175 pound frame to handle physical play at the next level. What Morris lacks in physical tools he makes up for in basketball IQ and feel for the game, as he is extremely calm and steady with the ball which allows him to see the whole floor and always seems to make the right reads to make on target passes to his teammates.

There is no doubting Morris' proficiency as a passer, as he topped out at a 8.16 pure point rating as a senior, one of only seven players since 2010 with a PPR over 8.0. He has every pass in the book in his repertoire, as he can thread the needle on interior passes or make accurate kick out passes to shooters.

To stick in a NBA rotation long-term, Morris will need to develop ways to create offense for himself and become a more prolific scoring threat, which would open up even more passing lanes as he draws the attention of the defense. As a scorer, Morris has averaged just 13.8 points per 40 minutes pace adjusted over his collegiate career but hasn't been a highly efficient scorer as his 56% true shooting percentage as a senior [57% for his career] ranked sixth worst among point guards in our top 100. Morris' usage rate has increased every year as he has asked to take on a larger scoring role and in a smaller role as a scorer, he may be able to see an increase in his efficiency as he can be more selective with his field goal attempts.

Morris relies on a change of speed and impressive footwork to get into space in the lane rather than a quick first step to get past his initial defender. This can be a difficult way to consistently get open looks inside the arc which leads to heavily contested two point field goal attempts, especially with Morris being a primarily below the rim player. His 55.4% conversion rate at the rim is just an average mark and he doesn't have the frame to be able to confidently absorb contact as he gets to the line only 3.6 times per 40 minutes. He has become better at dropping floaters over rim protectors before he gets to the restricted area and that will likely become a key part of his scoring arsenal inside the arc at the next level.

Morris has had mixed results as a jump shooter and hasn't yet shown that he has the mechanics to stretch his shot to NBA range. While he has converted at a satisfactory rate of 38% on his three point attempts for his career, he has done so on a small sample of just 3.4 attempts per 40 minutes. His mechanics are promising from the mid-range area where he is confident pulling up off the dribble (42% on 52 attempts as a senior) but his accuracy becomes less consistent as the shot distance becomes longer. He has a host of problems he needs to improve upon in order to be able to be a capable NBA shooter, starting with his poor fundamentals on his release and ending with his tendency to fade sideways as he lands. He does not need to be an elite jump shooter, especially when off the ball, but he will need to be able to keep defenses honest and make them pay when they go under ball screens. He is a confident shooter, showing no hesitation pulling up from 15 feet and out, but he will need significant improvement in his mechanics to extend his range.

His intelligence and feel is also displayed on the defensive end, as he uses his instincts and quick hands to generate 1.9 steals per 40 minutes over his career. He always seems to be in the right spot defensively, making it difficult for his opponent to get an easy look at the rim as he is often in proper position to get a hand in his opponent's face and contest shots.

He isn't a perfect defensive prospect even for someone who is likely only able to defend point guards at the next level. He gets caught on screens easily and doesn't have the strength to fight through them and stay in the play. He has an average level of lateral quickness and he can be knocked off balance while defending the ball and isn't always able to quickly get back in front of his man. Morris will need to focus on mastering a defensive system and bringing a high level of energy each possession to provide as much value on that end as possible.

Morris brings plenty of intangibles to the table after leading a NBA style offense for four years as he never missed a game for Iowa State, playing in 140 total games and starting in 121 straight games, and has developed a high feel for the game on both ends of the floor. One of the younger seniors in our top 100, not turning 22 until a few days after the 2017 NBA Draft, there are certainly key skill areas where Morris will need to improve and although his upside may be somewhat limited by his relatively average athleticism and frame, it's easy to see how some teams could view him as a player who could step in right away and run a NBA offense coming off the bench.
Read Next...