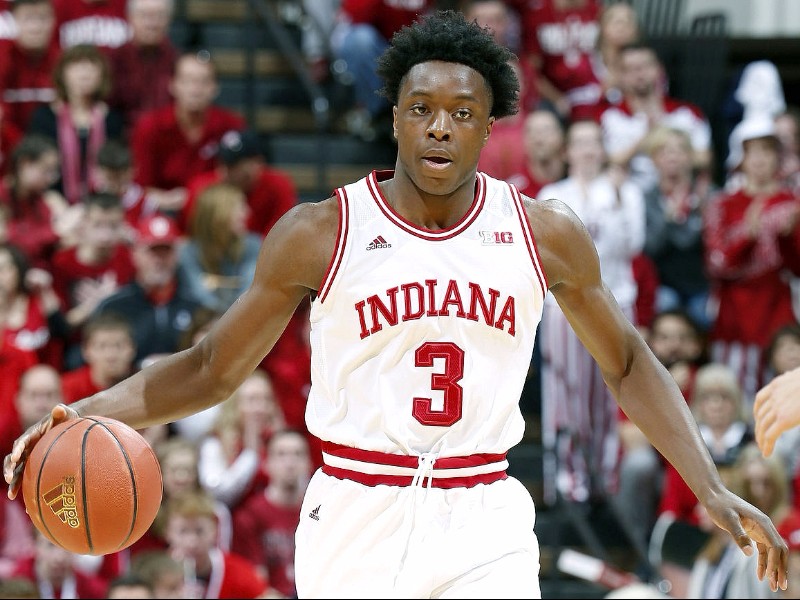 OG Anunoby showed significant promise over the course of his freshman season at Indiana, despite coming into college as a completely unheralded high school recruit. That culminated in a tremendous defensive performance in the NCAA Tournament Round of 32 against Kentucky, where he shut down future top-10 pick Jamal Murray and set the stage for what was expected to be a breakout sophomore campaign.

Anunoby made significant progress this season, averaging a strong 18 points, 9 rebounds, 2.3 assists, 2.1 steals and 2.1 blocks per-40 minutes, on an efficient 62% TS%, including strong performances in wins over eventual #1 NCAA Tournament seeds North Carolina and Kansas. An apparent ACL tear suffered in January forced him to have season-ending surgery, though, and Indiana, already in the midst of a difficult start to the Big Ten, went just 5-9 in his absence, missing the NCAA Tournament in the process.

Anunoby has an elite physical profile for a NBA combo forward, standing 68 in shoes, with a chiseled frame and a reported 76 wingspan that will easily allow him to play power forward or even spend time at the center position in smaller lineups. He moves like a wing, being light on his feet and capable of playing above the rim impressively in space, as he demonstrated with a number of powerful highlight-reel caliber finishes over the past two years.

Heres a closer look at the strengths Anunoby displayed throughout his time at Indiana:


Anunoby is best suited playing a compact role offensively, be it operating as a spot-up shooter, a straight line driver in dribble handoffs/attacking closeouts, or as a rim-runner in transition. He can also find some offense cutting off the ball (especially as a lob-target) or crashing the offensive glass, and is capable and willing to make the simple extra pass along the perimeter or into the low post within a set offense.

While he shows solid footwork and timing attacking an unbalanced defense in a straight line with his long strides and powerful frame, he is not someone you can expect to generate much offense on his own at this stage of his development. He is a crude ball-handler (especially with his left hand) who struggles to operate in isolation or pick and roll situations due to his high dribble that slows him down significantly off the bounce. He doesnt have any type of in-between game, almost never attempting a pull-up jumper, and isnt very comfortable finding the open man on the move, especially in traffic.

The biggest key to Anunobys ability to find an offensive role at the NBA level will be his jump-shot, which is somewhat of a question mark at this stage. Hes a career 36.5% 3-point shooter at the college level, and with time and space, the ball comes out of his hand nicely with solid rotation, giving plenty of room for optimism regarding his development in this area. With that said, the sample size is incredibly small, at just 74 total attempts in 50 games, and the fact that hes made just 52% of his free throws in college indicates that he has a long ways to go in this area.

Heres a closer look at the weaknesses Anunoby displayed throughout his time at Indiana:

Anunobys shooting mechanics leave something to be desired, as his jumper is somewhat stiff, with a slight, variable hop and fade that hurts his balance. He tends to guide the ball at times with his massive hands, shooting it with a rigid elbow, a low release and very little arc, struggling quite a bit to get it off when closely contested. Hes come a long ways in this area, but clearly has plenty of work to do still.

Defensively is where Anunoby has a chance to be an absolute difference maker at the NBA level. He has prototypical physical tools with his elite combination of size, length, strength and mobility, and demonstrated the ability to defend all five positions at the college level when he was dialed in and operating at maximum intensity. Indiana liked to put him on point guards, and hes extremely disruptive to an opposing teams offensive flow with his ability to sit down in a stance and keep smaller players in front with his excellent lateral quickness. Hes difficult for guards to shoot over with his gigantic reach, often blocking shots on the perimeter thanks to his excellent closeout speed, and also getting in the passing lanes at a terrific rate.

With that said, Anunoby doest always play with the same level of intensity on every possession, and scouts occasionally expressed a degree of frustration with his lack of toughness and general passivity. His lack of experience and just-average feel for the game showed up at times this season on both ends of the court, as he tends to lose his focus, and can be a bit slow reacting to whats happening on the floor. Thats to be excepted to a degree considering his extreme youth (hes younger than a number of freshmen projected to be drafted in the first round) and late-blooming trajectory, which means he still has plenty of upside to grow into down the road.

Should Anunoby elect to enter the draft, there will likely be strong interest throughout the first round pending the results of the medical evaluations of NBA team doctors, who will be asked to assess the likelihood of him making a full recovery and staying healthy long-term. NBA teams havent shied away from drafting injured players in the past, such as Joel Embiid, Nerlens Noel, Caris LeVert, Spencer Dinwiddie and others, who didnt even slide all that much based on where they were projected to be picked prior to getting hurt. But the details will be important and Anunoby may ultimately still elect to return to Indiana, where he can make a full recovery and boost his stock by showing hes completely healthy next season.
Read Next...