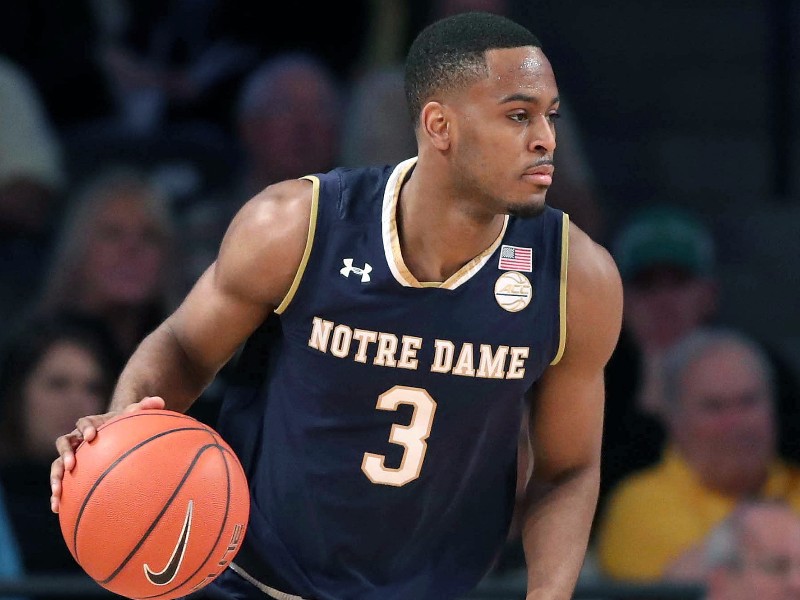 A breakout junior season that saw V.J. Beachem take on a larger role after the departure of Jerian Grant and Pat Connaughton planted him firmly on NBA Draft radars heading into his senior season. However, he may not have made the strides in his game scouts were looking for, as his production stayed relatively constant, ending his up and down senior year with averages of 17.0 points and 4.7 rebounds per 40 minutes on a 55% true shooting percentage.

Scouts are still intrigued by his potential as he certainly has the physical tools to fit into the 3 and D role that so many teams are looking to fill on the wing. Listed at 6'8 with a solid wingspan, he has the measurables to play the small forward position at the next level, but with a relatively thin 200 pound frame, he will need to add strength to add some versatility and be able to play some power forward minutes. He may not be an elite athlete, but he is smooth and can play above the rim at times, so filling out his frame should allow him to hold his own physically against other wings.

Although he has been a little one-dimensional as an offensive threat in his college career, with the majority of his possessions coming out of spot-up situations, he has been fairly efficient with his jump shot, which has helped NBA teams project him as a 3 and D role player. He's been a strong perimeter shooter in his career, converting 39.2% of his 582 total three point attempts. While his mechanics on his release are relatively clean, his shot trajectory has a tendency to be a little flat, which has led to some streakiness at times and raised questions about his potential to translate his jumper to the NBA three point line. He did see his accuracy dip a bit on catch and shoot opportunities from 46.8% on 171 shots as a junior to 36.9% on 176 shots as a senior, as he seemed to struggled with the added offensive responsibility he was asked to shoulder. Perimeter shooting will be his most important offensive skill at the next level and he will need to make some tweaks to his mechanics to be a respected shooter from NBA distance, something that is not difficult to project him doing in time.

To complement his spot-up shooting, Beachem has shown flashes of ability to attack a closeout and continuing to improve on this facet of his game will help him become less one-dimensional. He is primarily a straight line driver and isn't adept at changing speeds which can make him predictable off the dribble. His physical tools allows him to get to the rim and be a capable finisher once he gets there,, as he converted 62.5% of his 80 attempts according to Synergy Sports Technology by using his explosiveness in traffic and length to play above the rim.

Unfortunately Beachem can't always get to the rim as he struggles with his ball handling skills with a defender in front of him. He settles for off balance floaters while trying to pivot past the defender after he picks up his dribble as he lacks the advanced ball-handling moves to create space in traffic. He can be a soft finisher around the basket as he looks to avoid contact with his 2.4 free throw attempts per 40 minutes ranking fourth lowest among NCAA players in our top 100. He's also struggled to create for his teammates off the dribble, posting just 1.0 assists per 40 minutes, as he puts his head down as he attacks the rim in a straight line, which limits his vision and ability to see his open teammates. Beachem will need to improve his decision making off the dribble as he looks unsure of himself when met by a defender in front of him. He certainly has the athletic tools to finish efficiently at the rim and is a blossoming pull-up shooter (34% on jump shots off the dribble according to Synergy Sports Technology) so becoming more assertive and decisive should help him become a more well-rounded scorer. There are question marks about whether that is in his nature, though, as he can be extremely passive for long stretches and often looks content just floating around and blending in on both ends of the floor.

When Beachem is engaged defensively, he looks like a versatile wing defender, as he moves his feet well laterally to stay in front of his man and uses his wingspan to close down driving lanes and create turnovers. He can use his length to wreak havoc when he wants to, blocking 1.2 shots per 40 minutes while also creating 1.1 steals per 40 minutes. If he is able to bulk up and handle the physicality of bigger forwards, he could bring the lineup flexibility coaches crave by being able to switch nearly every screen and guard multiple positions for extended stretches.

However, Beachem's defensive impact hasn't always matched his potential, and there are some major questions about his ability to hold his own here at the next level. There are too many possessions where Beachem's intensity level is too casual or simply nonexistent, allowing himself to coast on that side of the floor. He fails to pressure the ball, let's himself get beat off the dribble and shies away from physical contact, which allows his man free looks at the rim. He doesn't like to mix it up on the glass and averaged only 4.0 defensive rebounds per 40 minutes, one of the lowest marks among small forwards in our top 100. He wasn't able to exert his will physically as much as scouts likely wanted to see as a senior, and he will need to find a higher level of intensity competing against NBA players if he wants to make an impact when he sees the floor.

Beachem hasn't always embraced the moment and stepped up when his team needed a big play on either end of the court, and he will need to prove he can deal with physical play at the next level. Scouts have some concerns about the level of toughness and intensity he would bring to a 3 and D role and he will need to show he has the mental makeup to accept that role and survive in the face of adversity.

His athletic tools and his well-defined potential role at the next level makes Beachem a decent bet to hear his name called on draft night, especially once he goes through the pre-draft workout setting, where he should excel. Although he is already 22, he has only been a full-time collegiate player for two seasons and a NBA team will be hoping to unlock some untapped potential to turn him into a valuable rotation player.
Read Next...