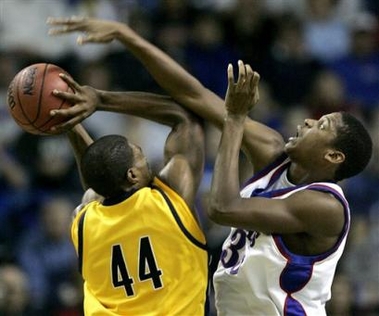 Joey Whelan
@DraftExpress
The season was over before it started for Giles last season, who was kicked off the Kansas basketball team due to a number of issues off the court and academic problems. The talented big man decided to transfer to Oregon State, where he will be given every opportunity to shine this season, and where he must show progress on the court as well as maturity off the court to improve his draft stock.

Giles possesses excellent physical attributes for an NBA big man, starting with a 74 wingspan and an excellent frame which he has clearly worked on over the course of his college career. He has a picture perfect body for an NBA center, and the bulk he added during his two years at Kansas has not affected his athleticism one bit. When motivated, Giles runs the court like a guard, which led to some easy baskets for the Jay hawks two seasons ago.

Offensively, the 22 year old center has some decent tools, including a right handed hook shot that he relies on out of the post. In addition, he can step out to 17 feet and hit the open jumper with solid consistency. Due to his great length, Giles also picks up a number of garbage points inside, where it is nearly impossible for opposing bigs to stop him from scoring. Unfortunately, he has very little to work with in terms of moves in the post, and his left hand was non-existent during his two seasons at Kansas. Giles also has struggles with catching the ball as well, even though he usually establishes great position on the low block.

On defense, Giles has a rare combination of timing, athleticism, and length that makes him a potentially great shot-blocker. During his sophomore year, he started to put these tools to work, especially with his man to man defense in the low post. As a help defender, the talented center missed far too many rotations to have a big impact as a weak-side shot-blocker. Giles also has the potential to become a very good rebounder, though he relies on length and athleticism at this point rather than using his body to gain position. He often loses the inside position anyway by attempting to block shots despite his lack of position to do so. Right now, most everything regarding his draft stock has to do with his potential and size, and not production.

This will be a telling season for Giles both on and off the court. If he finally gets his act together and shows progress on the court, he could easily make himself a first round pick in the 2008 NBA draft. Oregon State will rely heavily on his play in the middle this season, so he should have every chance to show hes made strides with his game in his red-shirt season. Few prospects have the natural gifts that Giles possesses, but some added maturity will go a long way in proving hes ready to make the leap to the next level.
Read full article

Joseph Treutlein
@DraftExpress
C.J. Giles is easily one of the most frustrating players in the country to scout due to numerous reasons. On one hand, we see a player who has all the natural tools you would look for in definite first round pick, with the potential to even rise to a mid first round pick. Then on the other hand, we see a player who is extremely limited in many areas of the game, and has countless off the court issues that lead you to believe that he will never come close to becoming the player he has the chance to be.

In terms of raw athleticism, there is little more to be asked for then what Giles offers you. For starters, he is a legit 610 and possesses a monstrous 74 wingspan, which he actually utilizes unlike so many of todays big men. The Kansas junior has a nice frame to be built upon, although both his upper and lower body are undeveloped at the moment. He does however run the floor incredibly well, which often results in tip-ins and/or inside buckets on the fast break as the trail man down the floor. As long as C.J. is motivated and runs the floor like this (and as he did in his 17 point performance against emerging big man Devon Hardin and the rest of the Cal Bears), it will be a lot easier for him to put points on the board than if he were to have to create moves for himself out of the post.

In terms of offensive skill, its clear to all that this (former?) Jayhawk big man has a lot of work to do. He does have a really smooth looking right handed jump hook with his back to the basket, but that is his lone move out of the post. Giles shooting ability extends to around 17 feet, where he is a constant threat to knock down open jump shots. That is about where his offensive skill set ends however, as he has shown very little in terms of low post moves (aside from the aforementioned right hook), and has shown very little ability to put the ball on the floor.

C.J. needs tons of work on his hands and footwork, which are both crucial to big men in todays game. He constantly bobbles and/or drops passes that could result in open layups/dunks, which has a lot to do with why he only averaged 6.4 points per game this past season as a sophomore.

Defensively, the Seattle native is slightly above average, with the potential to be excellent if he wanted to be. He does not box out very often on the defensive end, instead opting to rely strictly on his size and leaping ability for rebounds. C.J.s timing and reaction for blocked shots is good, but his number of swats could improve drastically if he were to improve upon his defensive rotation, which always seems to be a second too slow.

Giles biggest problems however seem to be off the court issues. He was most recently been suspended from the Kansas Jayhawk team indefinitely following apparent academic issues, and then further hurt his cause by failing to pay child support. Many question if he will be allowed to play at all this season, and even if he is, what type of role he will play considering the loaded Kansas frontcourt of Julian Wright, Sasha Kaun, Darnell Jackson, and super freshman Darrell Arthur. It will be interesting to see how the C.J. Giles saga pans out, since it is clear to scouts and basketball fans alike that we are looking at a player who has all of the tools to be in the NBA one day. It seems that Giles himself is the one hindering himself from ever reaching his full potential.

Fortunately for him, it wont be too tough for him to find an NBA trainer like Joe Abunassar or David Thorpe to whip him into the shape of his life and get him ready to blow NBA people away in a few private workouts. Considering his tools and upside, thats really all it will take to get him into the first round, as long as he shows some added maturity off the court in the process.
Read full article

Landry Fields
@DraftExpress
C.J. Giles is a tantalizing prospect, blessed with the kind of frame that even LaMarcus Aldridge could be jealous of. At the same time, Giles is far behind the curve when it comes playing the actual game. Giles has no back to the basket game (his main source of offense is a 15 foot jumper), and seems to struggle in getting even the gimmees right around the basket to fall. In Kansas' loaded frontcourt, he has to fight for every minute he gets. Giles is the kind of player that could be completely off the draft radar in two years, or get hot for a stretch and instantly become lottery material. Next year is truly do or die for Giles, but he could certainly help himself in the coming weeks.
Read full article