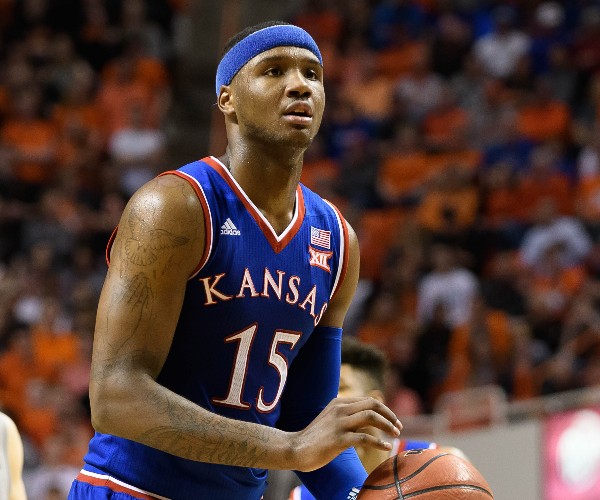 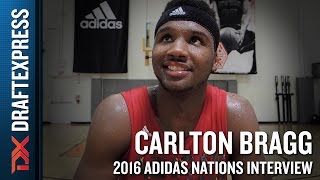 A top-20 recruit out of Cleveland, Carlton Bragg struggled to find a consistent spot in Bill Self's rotation as a freshman, finishing the year averaging just 3.8 points and 2.5 rebounds in just under nine minutes per game off the bench. Bragg should have more of an opportunity as a sophomore, with the losses of Perry Ellis, Jamari Traylor, Cheick Diallo and Hunter Mickelson opening up minutes in Self's frontcourt rotation.

Standing around 6'9 in shoes with an average wingspan, and a now-240 pound frame he's done his best to maximize, Bragg spent most of his time at the power forward and center spots. While not blessed with incredible size, both vertically and physically, Bragg is quick and agile for a big man, and can use that to his advantage.

Offensively, Bragg showed the most potential as a face-up forward, with fluid, consistent shooting mechanics and a soft touch that looks like can be built upon down the road. Bragg's effectiveness was mostly limited to the midrange last year, where he connected on an excellent 45.8% of his shots between 17' and the three-point line, according to Synergy Sports Technology, but he has the kind of effortless stroke that looks like it should be able to be extended to three-point range with time and repetition.

The threat of Bragg's jumper opens up some lanes to the hoop, both in terms of taking his man off the dribble or rolling to the hoop on pick and rolls. Bragg doesn't have exceptional ball handling ability at this stage of his career, but can attack an aggressive closeout if given the chance. Once Bragg gets to the hoop, he's a solid, if not incredibly explosive, leaper around the basket with solid touch with both hands, and he does a reasonable job of using his body to shield defenders, but his lack of length and then-underdeveloped frame hurt him quite a bit when contested. On the plus side, Bragg claims to have gained over 25 pounds of muscle over the summer, so it will be interesting to see how this impacts his game moving forward.

The rest of Bragg's offensive game is mostly a work in progress. He moves well off the ball, using his quickness to his advantage, but can struggle when contested at the rim, and will hopefully be aided by improved bulk. Bragg also does a good job crashing the offensive glass, showing consistent pursuit and a nose for the ball, using his quickness to catch defenders off guard.

Defensively Bragg has a ways to go before he makes a consistent impact, in any real facet. He doesn't offer much as a shot blocker, swatting just 0.8 blocks per 40 minutes, pace adjusted, which accounts for just 2.2% of the shots the opponent took while he was on the court, both numbers well below-average for a player getting most of his minutes near the basket defensively. Bragg's short reach certainly hurts him in this regard, and he doesn't have the quick, explosive leaping ability or elite instincts to make up for this deficit.

To make matters worse Bragg is a below-average defensive rebounder as well, pulling down just 6.3 defensive rebounds per 40 minutes, once again when adjusted for pace. To put that number in perspective Domantas Sabonis, one of the best defensive rebounders in college basketball last season, hauled down 11.2 defensive boards per 40 minutes, pace adjusted. While Bragg's lack of lower body strength certainly played a part in this number, it will be interesting to see if this improves with the weight he allegedly gained during the offseason, Bragg's motor seems to come and go in this facet of the game, and he doesn't seem to be a naturally instinctive rebounder. Just like his lack of lower body strength impacts his defensive rebounding, Bragg is a poor post defender, with his lack of strength and lack of length compounded by poor technique and a high center of gravity, and Bragg frequently had to be hidden defensively because of that.

Bragg shows a lot more potential as a defender away from the basket, either defending more perimeter-oriented forwards or guarding the pick and roll. Still, while Bragg shows some potential in terms of lateral quickness to defend on the perimeter, his overall technique still holds him back in this regard, frequently in an upright stance that puts him at a disadvantage.

The NBA is more willing to deal with the limitations of face-up power forwards than ever before, and Bragg's shooting, especially if he can extend that to three-point range, is a tool that is extremely valued at the next level. Still, Bragg needs to become a more consistent contributor in other facets of the game, and he'll have quite the opportunity to assume a significantly larger role for Bill Self and the Kansas Jayhawks this season.

Bragg showed intriguing glimpses of improvement at the adidas Nations camp in August, both physically and skill-wise, making shots from the perimeter, guarding all over the floor and generally displaying the type of versatility on both ends of the floor NBA teams covet from big men these days, which will make his progress this season notable to track. Bragg is a little older than your typical sophomore, turning 21 in December, which could play a role in how long he decides to stay in college.
Read full article

Strengths:
-Very strong frame for his age. Long arms. Big hands. Solid athlete
-Good shooting mechanics from the perimeter
-Very effective in transition
-Loves to play above the rim
-Physical player. Has a bit of a mean streak
-Excellent potential defensively with his strong frame and long arms
-Good timing as a shot-blocker

Weaknesses
-Doesn't have any real concept of how to operate in a half-court setting
-Shot-selection, decision making is poor
-Regularly settles for tough, off balance jumpers
-Average ball-handler. Cannot create his own shot
-No left hand
-Doesn't use his mature frame to his advantage inside the post
-Poor fundamentals on defense. Doesn't get into a stance. Doesn't put much effort in

Outlook: Physically mature forward somewhat stuck between positions. Likes to play on the perimeter but doesn't have the skill-set to do much besides shooting jumpers. Needs to do a better job of channeling his energy and focus.
Read full article