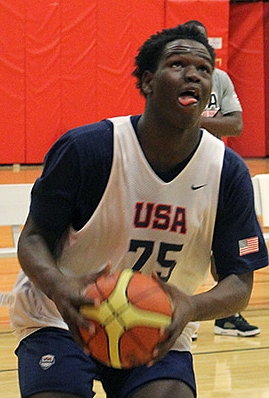 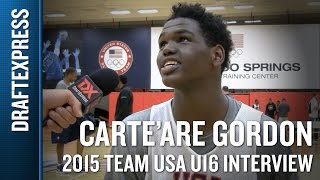 Mike Schmitz
@Mike_Schmitz
The youngest among the 33 players invited, not turning 16 for another nine months, Carte'Are Gordon (#15 24/7) was among the last players released from the final roster, but nevertheless had an extremely positive week and proved to be among the most productive prospects in attendance. He showed up in much better shape than at the USA Basketball Development Camp last October, and also appeared to play with a greater sense of urgency and with a higher intensity level.

Gordon is undersized for a power forward, standing around 6-7 in shoes, although his 7-foot wingspan and big hands helps compensate for that somewhat. He's already relatively mature physically, at 251 pounds, with big, thick calves, so hopefully for his sake he can continue to grow another inch or two, which would help him significantly. He's also not particularly athletic, at least not in a traditional sense, as he's neither incredibly quick nor explosive.

He makes up for his average physical tools with tremendous instincts and polish for a player his age. Gordon was constantly in great position on the offensive glass, outworking players significantly bigger and more athletic than him thanks to his long arms and outstanding timing and anticipation skills pursuing loose balls. He also has a nice skill-level offensively, particularly inside the paint, where he was very good footwork and soft touch as a finisher. His jump-shot is very much a work in progress, something he'll need to work on considering his lack of size, but he did prove capable of handling the ball a bit and executing some advanced moves for someone his age. He's also a very good passer, which is not a surprising considering the feel for the game he shows on the glass.

Gordon is not a great defender at this stage, and probably doesn't project as one considering his average physical tools. He did prove capable of stepping out onto the perimeter and sliding his feet a bit on the pick and roll, and also got in the passing lanes a bit as well. He's not explosive enough to protect the rim, so becoming as versatile as he can defensively (and likely slimming down a bit) will help his chances quite a bit.