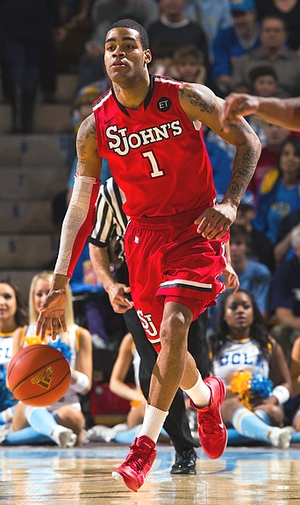 A player we were watching closely coming into this season, D.J. Kennedy has not taken a big step forward in his first year under new Head Coach Steve Lavin. While St. John's is on pace to improve on their 6-12 conference record from last season, Kennedy has not taken his game to the next level despite playing a key part in his team's improvement.

As we noted the last time we wrote about him in December of 2009, Kennedy is a fluid and solid, albeit unspectacular, athlete who offers intriguing versatility and good size on the wing. The Pittsburgh native does a number of things well, but he hasn't made the jump as a scorer that would have propelled him firmly into draft conversations, instead seeing his numbers regress across the board this season.

Some of Kennedy's statistical regression can be attributed to the role he's playing. After spending a significant amount of time running the pick and roll as a junior, Kennedy has seldom had a chance to exploit his size, basketball IQ, and passing ability in the two-man game this season. On top of that, he has looked to put the ball on the floor and get to the rim substantially more often, reeling in his penchant for shooting jump shots from beyond the arc.

Seeing fewer touches as a primary ball-handler, shooting less than half as many three-pointers and 3.2 fewer shots per-game than he did last season, and willingly deferring to his fellow seniors, it isn't surprising to see Kennedy's numbers take a hit. Even at this level he appears most comfortable as a role player, which meshes well with what he'd be expected to do at the next level.

Though Kennedy hasn't been able to handle the ball as regularly as he used to, he still flashes a smooth floor game and the ability to push the ball himself in transition. A fairly heady passer, he has looked to pick and choose his spots in transition and half court sets. Not as aggressive as a shooter, he's done most of his damage on the fast break.

When the game slows down, Kennedy has shot the ball reasonably well this season, but simply doesn't attempted that many jumpers. Having knocked down some 37% of his jump shots according to Synergy Sports Technology, he has shown reliable mechanics with his feet set, but has struggled to knock down shots off the dribble. Lacking the ability to create separation at will attacking the rim and altering his form when defended, the lefty wing was more efficient off the dribble last season when he was hoisting up shots from the perimeter working off of screens.

Defensively, Kennedy is an exceptional stopper at the NCAA level. Whether he's cleaning the glass, contesting shots, or cutting off penetration, his defensive ability is impressive and ranks as one of his best assets as a prospect.

Similar to former Memphis Tiger Antonio Anderson on a number of levels, Kennedy has never been one to blow anyone away on first glance, and his role at the next level would unquestionably be as a role player. Despite taking a step back this season, Kennedy remains one of the more versatile wings in the senior class, and is completely capable of showing well at the Portsmouth Invitational Tournament should he elect to attend.
Read full article

Quietly slipping below the radar screen of most NBA scouts and mainstream media analysts, D.J. Kennedy has slowly but surely turned himself into one of the most versatile small forwards in all of college basketball.

A major contributor from the moment he arrived at St. John's, Kennedy has established himself as the most important player on the Red Storm's roster in this, his junior season. He contributes in a wide variety of ways, being their leading scorer (while still maintaining excellent efficiency numbers), their main half-court facilitator and playmaker, a major force on the glass, and the one who is consistently assigned to defend the opposing team's best perimeter player.

From a physical standpoint, Kennedy clearly has the tools to play in the NBA. The lefty has good size at 6-6 to go along with long arms and a chiseled frame, not being a freakishly explosive athlete, but clearly having the fluidity and quickness to translate his game to the next level.

Offensively, Kennedy is not a terribly skilled small forward, but still finds ways to contribute to his team in a variety of different ways. Not much of a shot-creator or off the dribble shooter, he is, as mentioned, his team's main facilitator, a sort of point forward who makes good decisions, directs traffic on the floor and does a great job getting his teammates involved, as evidenced by his high assist numbers--which clearly would be even higher with better talent around him.

He is very effective in transition, where his average handle (particularly driving left) and inability to change directions with the ball aren't as much of an issue, as he can use his pure speed and strength to get to the basket and finish around the rim, while putting him at the free throw line at a pretty nice rate. He also takes a decent amount of 3-pointers (3.8 per game) and knocks them down at a solid 37% clip, despite possessing a somewhat flat and awkward lefty stroke that clearly has plenty of room for improvement.

Perhaps the most notable part about Kennedy's offensive profile is the fact that he has already proven his merit as a willing and very effective role-player, which is exactly what he would have to be in the NBA.

Defensively, Kennedy is already one of the best man to man defenders you'll find in the Big East, showing a very intriguing combination of physical tools, smarts and intensity.

He uses his length extremely well contesting shots on the perimeter, doing an excellent job staying in front of his matchup and looking very intelligent in the way he baits opposing players into taking tough shots over his outstretched arms. Watching his defensive possessions from this season and last, it's impressive to see the way in which he was asked to guard everything from point guards to power forwards for St. John's.

As a rebounder, Kennedy is very productive, hauling down 8.3 boards per-40 minutes pace adjusted, a third of which come on the offensive end. He does a good job coming up with the occasional block or steal, but isn't one to gamble unnecessarily, and commits an obscenely low number of personal fouls, only 16 in 367 minutes all season long, or one every 23 minutes.

Kennedy isn't the type of player who will wow you on first glance with his shot-creating ability or pure talent. What he is is a very fundamentally sound all-around player who should be able to blend in seamlessly with better players around him thanks to the excellent versatility he brings to the table.

If he can find a way to become a true knock-down spot-up shooter by the time he's finished at St. John's, he should be able to find a niche in the NBA, as a Courtney Lee type jack of all trades.
Read full article