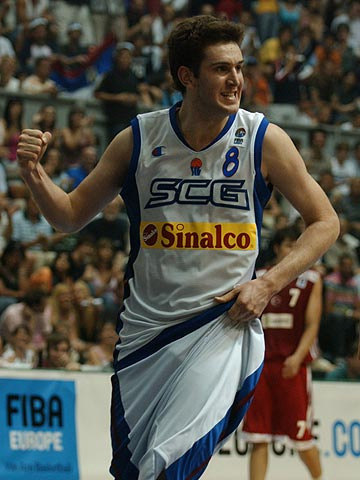 Luis Fernández
@DraftExpress
Labovic is an important part of the 1987 Serbian generation that has been so successful in youth basketball. This has included Cadet champion in 2003 sharing the frontcourt with Aleksandrov, junior champion and MVP in 2005, and U-20 champion in 2006 (always Europe-wise). He has shined at these stages thanks to his excellent skill set, basketball IQ and maturity. Those are useful characteristics in his pro career, where Labovic looks like a rather steady player. He currently averages 9.8 points and 5.2 rebounds in the ULEB Cup, and is yet another useful piece of the deep, young and talented FMP. Dragan is a versatile guy who can face the basket or play in the low post. Playing the power forward position, we usually see him shooting from the mid-range area with nice accuracy, and even from the three-point line, where he still struggles a bit. Still, he has good footwork to evolve down low and the ability to finish with both hands, as well as the ability to easily put the ball on the floor. A smart player, he passes the ball pretty well within the offensive flow, and battles on defense despite his own athletic limitations. This is precisely the biggest knock on him: his poor athleticism seriously limits his potential, particularly NBA wise, and while he stands somewhere between 6-9 and 6-10, which is not that bad, the combination leaves a lot to be desired in terms of making the NBA cut. He will be a very serviceable player in Europe, thats for sure, but its very hard to picture him at the NBA level.
Read full article

Mike Schmidt
@DraftExpress
Labovic was one of the more experienced players in the Hoop Summit game, and produced well in limited minutes. He has a wide array of skills, which includes some nice post moves, and the ability to step outside and hit a jumper. Labovics limitations were apparent against the athletic American competition, however. He lacks any type of quickness or athleticism, which really limited his rebounding and where he could get his shot off. The lack of physical attributes will probably keep Labovic from the NBA, but he has a nice skill set that will allow him to produce for many years in Europe.
Read full article

Carlo Sandrinelli
@DraftExpress
Labovic is expected to be one of the top top options for the international team after he earned MVP honors in the European Junior Championships last summer. We are talking about a rather mature player, with a fantastic skill set, even if hes not the most interesting guy around in terms of potential. Standing 6-9 (not far from 6-10), Dragan is an excellent low post threat, showing footwork, footspeed, intelligence using his body and ability to finish with both hands. Hes consistent delivering his jumper from the mid-range area and he can even knock them down from behind the arc. He has the ability to put the ball on the floor and hes a very good passer, both from the low or high post. Labovics basketball IQ is truly remarkable, showing an excellent understanding of the game. Displaying good attitude at both ends of the court, his shortcomings arise in terms of average athleticism, although he enjoys nice mobility. Leading Borac, Labovic currently averages around 18 points and 7 rebounds in the Serbian League (this is a sort of second division, since the best Serbian teams play the Adriatic League). It will be really interesting to see how he deals with the very gifted American athletes.
Read full article

Luis Fernández
@DraftExpress
Labovic was selected MVP after an impressive tournament where he proved to be the most skilled and effective low post threat seen in Belgrade. Another member of the wonderful Serbian generation of 1987 including Mijatovic, Tepic, Teodosic and Aleksandrov, that amazed in Rivas two years ago in the cadet stage, Dragan had delighted the audience then with his fundamentally sound and all around game. And while he looks as skilled as always, in this championship he focused his offensive efforts in the paint and mid-range area.

Dragans shortcoming has been always his combination of size and athleticism, which is not on par with his amazing game. Hes a 6-9 power forward (he doesnt look too far from 6-10 though) with a limited vertical leap and only decent quickness, although he shows nice mobility. Therefore, he doesnt seem to enjoy too much NBA potential, while the European game looks like perfectly suited for him.

The first option for Labovic in Belgrade was always the low post, from where he actively looked for the ball. He looks totally under control there: he receives, evaluates the situation and takes the best decision almost always; whether to dribble a little to improve his position, make a movement to one side or another, deliver a turnaround jumper or pass the ball to a teammate. Not only his skills help him; hes physically rather mature compared with many other junior players, so he was rarely outmuscled in Belgrade.

Back to his low post options, if he decides to look for the basket himself, he can take advantage of his excellent footwork in the low post. He shows very good footspeed and has the ability to finish with both hands. Thats a hard combination to stop, although he might have some troubles against smarter intimidators. The turnaround jumper is another option, which he can perform with a slight fade away movement. In general, hes very reliable from the mid-range area with his jumper, showing solid mechanics and a fairly quick release, while he enjoys three-point range, although he wasnt prolific at all from this distance in Belgrade.

Dragan is a very smart player. He fully knows the game, showing a high basketball IQ. Hes a nice passer, either from the low or high post, who understands where the ball has to go to keep the offensive flow. Hes also a guy who shows passion playing the game; you can feel he loves it and hes intense on the court. It helps him also on the defensive end, where he displays the right attitude and shows nice lateral mobility.

Summarizing, Labovic might not be one of those kids oozing with potential, and youll probably never see him on an NBA court, but he is an excellent basketball player.
Read full article

Luis Fernández
@DraftExpress
The Serbian big man had amazed last year at the European Cadet Championships with skills resembling such players as Vlade Divac and Zoran Savic. A matter of concern then was his apparent physical maturity and growth potential for a guy just 6'9 tall and not particulary athletic. This year he has responded with considerable flashes of his great talent for this game, but he has also confirmed those concerns, as he doesn't look improved at all, and his physical profile impresses less as the competition gets older.

Labovic is fundamentally sound, excelling in several skills. He has a very good shot out to the international three-point line. The good mechanics are there including a nice, speedy release. He prefers to shoot while static, though. His post-up game is remarkable, boasting great footwork and very good footspeed. He passes well from the post and facing the basket. He handles the ball nicely and runs the floor pretty well. He also can penetrate using his decent first step. And he's quite intense on defense. But above all of this, it is the way he understands basketball, how easy he makes it look, that makes him such a great ball player. He definitely has a feel for the game.

Nevertheless, the concerns arise when you recall that he is just 6'9 and probably won't grow anymore, and that his athleticism is average at best for a power forward. So, where does all of this leave Dragan? Probably playing in Europe at good level. But being such a talented kid, I won't rule out anything.
Read full article