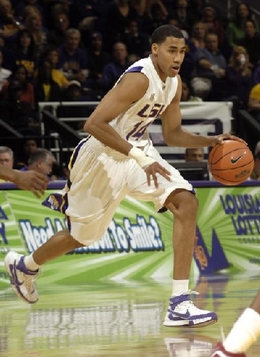 Joey Whelan
@DraftExpress
Temple enters his senior season looking to improve his status as an NBA prospect after showing some solid ability over the last few seasons, mixed in with long stretches of disappointing play. The versatility that he brings to the table immediately offers a certain amount of intrigue, yet his limited productivity makes you ponder his value.

There is very little not to like about Temple in terms of natural physical gifts. He has outstanding size for a guard coupled with an enormous wingspan. He also has fairly smooth (although not freakish) athleticism, although his frame and overall bulk leave a lot to be desired.

The bulk of Temple's scoring comes via transition, largely in part because he is so unassertive in half-court sets. He runs the pick and roll awfully well for a big guard, making good decisions and coming off of screens close in order to exert maximum effort out of the defense. Passing is an area that he certainly excels in, producing a nice assist to turnover ratio and assist numbers fairly uncommon for someone standing 6'6.

While there are many traits that may draw you to Temple, there are equally as many traits that he could use work on. Most glaring is the fact that he is an incredibly limited offensive player, producing the second worst scoring rate of any player in our NCAA database.

Its extremely rare to see a player average 34 minutes per game and score just 6 points in that span, shooting under 40% from the field, 30% from beyond the arc, and barely getting to the free throw line in the process. Most teams at any level of basketball just cannot afford to have a player on the court that simply is not a threat to score, and until Temple shows otherwise, thats the only way he can currently be labeled.

Beyond being extremely passive, Temple is also incredibly left hand dominant, driving left 90 percent of the time. This is completely evident when performing advanced scouting, and makes him quite predictable to guard. His shooting mechanics are very inconsistent on top of that, releasing the ball from above his head and rarely getting a consistent release point in the process. In the rare occasion that he does get to the rim, he often lacks the strength to finish around the rim due to his poor frame.

Temple is a stud on the defensive end, however. His enormous wingspan and solid quickness allow him to get out in the passing lanes and create a ton of deflections. Able to stay in front of his man laterally, his length enables him to block a substantial number of shots for a player playing the guard position. Defensive potential is without a doubt one of the main selling points of Temple as a prospect.

Only time will tell how Trent Johnson's new system will cater towards Temple's talents. One thing for certain is that Temple will be relied upon as a catalyst for the LSU offense, needed to distribute the ball to fellow prospects Marcus Thornton and Chris Johnson. Temple may have an opportunity to show his stuff at Portsmouth after a strong senior season, but will have to show some semblance of an offensive game if hes to draw any serious looks at the professional level.
Read full article