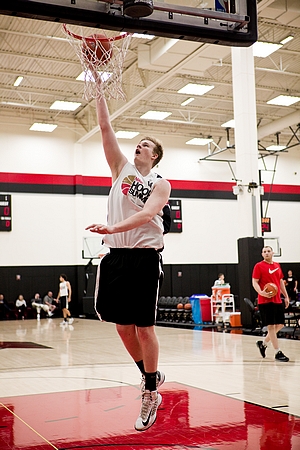 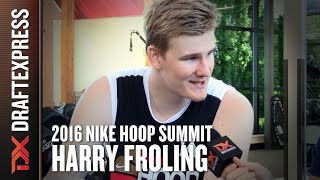 Jonathan Givony
@DraftExpress
That will probably start with SMU commit Harry Froling, who while certainly not the best long term prospect, has taken the reigns as their most productive and important player early on in the practices we've been able to take in.

The first impression you get of Froling is that of his body, which is extremely poorly conditioned at the moment and in turn has caused him to draw significant skepticism from the NBA scouts in attendance about the extent of his long term upside. Still, you can't help but admire how effective he's been able to be thus far in spite of that. Whether it's scoring inside the post with crafty footwork and turnaround jumpers, crashing the offensive glass with terrific timing, getting in the passing lanes with excellent anticipation skills, or even creating off the dribble and tossing in nifty floaters, Froling defies initial expectations for what he should be able to accomplish on the basketball floor with his outstanding skill level, feel for the game, and competitiveness.

At 261 pounds, Froling has a long ways to go before he'll be able to play the type of defense Larry Brown will likely expect from him, and he has indeed shown to be somewhat on the lazy side on that end of the floor with the lackadaisical attitude he displays towards stepping out on the pick and roll, getting a hand up on shooters, or rotating over the weakside for blocks. Part of that is due to his body, part his lack of lateral quickness and explosiveness, and part simply the fact that he's young and doesn't realize how to play hard on every possession. Still, there's no question he picked the right coach to help him improve on that part of his game.

Drawing comparisons to the likes of former Hoop Summit participants Milan Macvan, Enes Kanter and Nikola Jokic, Froling will play a huge role in any success the World Team is able to have on Saturday.
Read full article

Measuring far bigger than typically listed, Froling seems like a lock to play the center position given his heavy 261-pound frame. He has a negative wingspan, and will be joined by two other big man prospects in SMU's freshman class, so it will be interesting to see how Larry Brown opts to utilize him alongside Ted Kapita and Bruno Fernando long-term.
Read full article

Strengths:
-Very skilled big man who can do a little bit of everything offensively
-Uses his strong frame to carve out deep post position. Has excellent footwork and soft touch on his jump-hook.
-Excellent shooter with legit range out to the 3-point line
-Can attack a closeout with very nice timing and footwork, will even mix in an occasional spin move
-Handles the ball in transition at times
-Has a strong feel for the game. Passes the ball extremely well. Really knows how to play
-Has good timing as a rebounder. Not afraid to mix things up on the glass. Crafty guy. Pushes off when refs aren't looking
-Physical player. Sets bruising screens

Weaknesses:
-Somewhat stuck between the power forward and center positions defensively
-Came into the camp looking very out of shape. Could easily stand to shed 15-20 pounds off his frame
-Does not have much lateral quickness. Will likely struggle to stay in front of most power forwards
-Does not have great height or length for a center. Doesn't have the explosiveness to make up for that.
-Doesn't block shots or get in the passing lanes due to his physical limitations.
-Will miss some easy looks at times due to his tendency for playing below the rim

Outlook: Australian big man named MVP of the camp after his team won the championship. Parents both played professionally. Committed to SMU (where both of his sisters play basketball). Has an old man's game with a very high skill level offensively. Not particularly athletic, but may be able to maximize his tools by getting into significantly better shape. Will be a very difficult offensive matchup at the college level playing the center position due to his high skill-level and excellent feel for the game. Will likely need to show he can guard power forwards to emerge as a legit NBA prospect in time.
Read full article