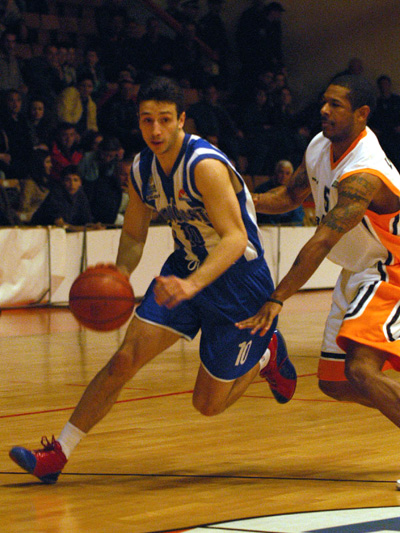 Kristian Hohnjec
@DraftExpress
This season Koljevic hasn't shown anything new. He's still basically the same player he was two years ago, which means that he has pretty good chances to go undrafted should he stay in the draft, although someone could nab him in the 2nd round to see how he develops over the next few seasons. He participated in the Chicago pre-draft camp last year and had an average showing at best. He still has problems getting his teammates involved and barely makes more assists than turnovers. He's a very good shooter, but often forces some bad shoots, so his percentages aren't as good as they could be. He's more of a SG than a PG right now, and he's undersized for the 2 spot. His NBA future is very much up in the air, but he could be a very good player in Europe. Ivan is very similar to Marko Popovic at this age.
Read full article

Strengths
Ivan Koljevic is a skilled point guard with remarkable quickness, especially considering European standards. His quickness is reinforced with his great handles, with a magnificent cross-over, which allow him to keep up the speed while dribbling. With those skills he can't be anything but a good penetrator, and Koljevec certainly is. He possesses remarkable driving ability, and either go for the lay-up in heavy traffic, or dish to a teammate, during which he shows a nice passing ability and court vision.

His other main offensive weapon is his jumper, particulary three-poointers (40% from the international three point arc), which are rather effective and delivered with lightning speed. He loves to dribble while facing the defender matched up against him, and can choose to either cross him over or release a trey in the blink of an eye. This causes the defender to keep an eye on both those abilities, making it hard to adjust. On the defensive end, Koljevic shows decent intensity.

Koljevic possesses a fantastic work ethic. He is said to be working out either with or without the ball at least 10 hours each day.

Weaknesses
Koljevic often plays without control. He is known to abuse the ball. The shooting ability spoken of in the 'Strengths' section can at times make him shoot bricks when the defender is too close to him. When he penetrates, he doesn't always find a good solution, which can lead to turnovers. Being a small guard, it's difficult for him to finish with the big guys on the paint, and sometimes he doesn't find a teammate to feed. He looks down to the ball when he starts the penetration, loosing some perspective of the situation of the players on the court. And while it's true that he drives and dish quite well, showing a quick mind, it can't say he's a great ball distributor in half court sets, taking in account his position on court. Defensively, you would expect a better latheral movement out of a player of his characteristics, but unfortunately, that's not the case with him. He has poor stealing stats for a player so quick, Taking into account that he doesn't wish to risk his defensive position on court, he's not particulary good reading passing lines. His baskteball IQ is questionable for a playmaker, and he lacks tactical discipline. He's still a little bit inmature and lacks mental toughness, which can lead to turning the ball over in crucial moments. Koljevic's lack of size might hurt his stock.

Competition
Played a full Euroleague season (Europe's top competition) with Buducnost during the 2001/2002 season and averaged a solid 9ppg and just over an assist per game. That season's Buducnost squad included eventual NBA draftees Aleksandar Pavlovic, Zarko Cabarkapa, and Slavko Vranjes (Koljevic had started alongside Pavlovic and Cabarkapa). Unfortunately, that season got blurred by an embarassing 63 point loss to Italy's Montepaschi in the final regular season game. He also played on the S&M 2002 Global Games squad that included Pistons' #2 overall pick Darko Milicic and was a member of the S&M team which won the European Championship for players under 20 years of age.

He wasn't able to join the 2004 Global Games squad because of a series post-draft workouts he had scheduled, mainly with the Cleveland Cavaliers. He went on to once again play for the under-20 national team, but one that finished at a dissapointing 5th place.

Outlook
He had declared for the 2004 draft, but pulled out at the last minute, deciding that there's no need to rush. The most important thing to him were both pre and post-draft workouts, during which, according to his own words, he had gained 30lb of muscle mass and improved his playing technique.

Had he stayed in the draft,he'd have been likely chosen in the second round, although a late first round appereance couldn't be ruled out, especially by a team not in an immediate need for help at the PG position. He'll now compete for another season in Europe, either with his current team, KK Buducnost, with whom he has a multi year contract that expires in 5 years, or another prominent European club looking for a PG upgrade. This might affect his draft status, both upwards or downwards.

Situation could end up being similar to that of Zoran Planinic, a Nets' pick in 2003 to play behind Jason Kidd, if he had indeed re-signed with New Jersey (which he eventually did).

Comments
Koljevic suffered during the coaching change in the middle of 2002/2003 season. He fit well into the old coach's concept, but has now been pushed back. There were even rumors of him transferring to one of Belgrade's powerhouses--then Vlade Divac owned Partizan or its arch rival, Red Star. That never happened, but it showed and proved that the coach and him didn't exactly see eye to eye.

Facts
He made his senior team debut at startling 16 years of age during the 2000/2001 season and became a starter during the following season.
Read full article