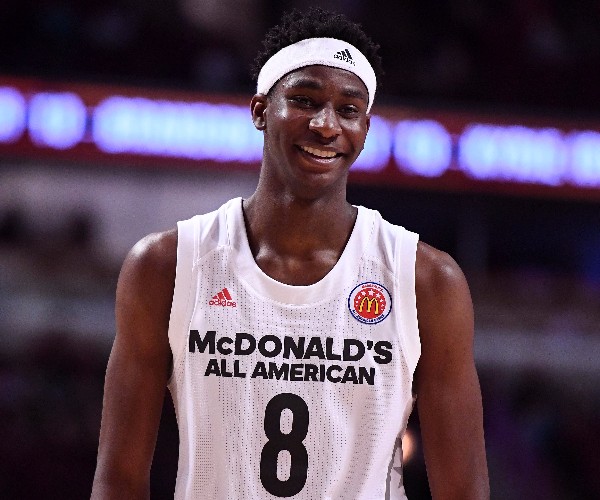 
Strengths
-Tremendous physical profile for a PF/C prospect at 6' 10 with a 7' 4 wingspan and 9' 1 standing reach. On the light side (225 lbs) at this stage, but has a big frame that will fill out really nicely. Wide shoulders, good base.
-Very fluid running the floor. Light on his feet. Can finish above the rim in space. May still have some untapped athletic potential. Lob target.
-Versatile defensively thanks to his agility, length and timing around the rim. Has the tools to be play a healthy amount of center, and the mobility to defend most fours. Good feet guarding the perimeter. Can switch ball screens and compete. Quick off his feet around the rim as a rim protector. Flashes of competitiveness. Very vocal.
-Really competed on the offensive glass. Keeps plays alive thanks to his length and quick leaping. Playing much harder and more aggressively than he had in the past.
-Budding skill set offensively. Comfortable finishing with either hand. Almost prefers his left in the post. Quick face up, rip through spins from mid-post spots. Great footwork.
-Untraditional mechanics but can stretch the floor a little bit. Very confident out to three. Quick release. Career 40.5% from three on 84 attempts.
-Has the agility to attack a closeout in space.
-Length helps him finish from different angles around the rim.
-Son of an NBA player. Very well-spoken and aware of his strengths and weaknesses.
-Youngest player on the USA team at 17.5. About a year young for his class.

Weaknesses
-Still lacks a degree of toughness and physicality. Doesn't always welcome contact. Motor runs hot and cold.
-Misses box outs on the defensive glass. Lifetime 10.1 rebounds per 40 minutes. Can improve his consistency on the boards.
-Defensive fundamentals can improve. Allows duck ins. Bites on shot fakes. Needs more experience defending on both the perimeter and interior.
-Not the most high IQ passer. Struggles to playmake from the perimeter or make intelligent decisions when pressured. Important for him to develop as a passer if he wants to operate on the perimeter.
-A bit soft with the ball in traffic. Better leaper in space. Not all that explosive in a crowd at this stage.
-Funky stroke - moonball without rotation. Low release point. Forward jumper. How translatable is his jumper versus NBA athletes? Likely better at the five against longer closeouts. Struggles to shoot when contested. Not going to shoot off the dribble or create much space out of face ups or mid-post touches.
-Has tools and checks a few different boxes but isn't quite great in one or two areas

Outlook
Jackson was the 2017 Nike Hoop Summit's breakout performer, making an impact on both ends of the floor all week long in practice and notching 13 points and 10 rebounds in 25 minutes in the Moda Center. He's made great strides since we first started evaluating him just under a year ago in Colorado Springs. Jackson has near-elite physical tools, versatility and upside defensively and an offensive skill set that figures to fit well in today's NBA. Jackson's toughness and motor still need some work, but he's in a situation to improve those areas next year as he'll play for hard-nosed Tom Izzo at Michigan State. It remains to be seen what exactly Jackson is as an NBA prospect - a stretch? a finisher? a shot blocker? a rebounder? - but the fact that he can do a little bit of everything while possessing physical upside is what makes him so intriguing. Jackson looked every bit of a future lottery pick in Portland. It may take him sometime to adjust to Izzo's demands at Michigan State but he's without a doubt one of the more intriguing long-term prospects to play in the 2017 Nike Hoop Summit game.
Read full article

Strengths
-Tremendous physical profile. 6'10 in shoes with a 7'3 wingspan and a 9'1 ½ standing reach. Big hands
-Very mobile. Quick off his feet. Runs well
-Highly proportioned frame that will continue to fill out. Already 225 pounds as a 16-year old. Will add as much strength as he needs in coming years
-Can make an outside shot. 32/81 in 21 Nike EYBL games this spring/summer. Awkward mechanics but has the touch to throw the ball in the basket. Shoots it the same way every time
-73% free throw shooter in EYBL
-Length and quickness gives him significant potential as a shot-blocker and rebounder, as well as getting in passing lanes.
-Shows potential stepping out on the perimeter and moving his feet when fully engaged
-Shows flashes of competitiveness and will make some incredibly impressive plays when he's operating at full speed. To his credit, he realizes he needs to work on playing hard all the time, and is actively trying to improve on that
-Could become a really effective rim protector in time
-Shows some flashes of passing ability. Will move the ball and find the open man
-Has as much upside as any player at the tournament given his physical tools and natural talent. Only 16 years old. Somewhat of a late bloomer

Weaknesses
-At an early stage of his development on both ends of the floor. Game moves a little too fast for him at times. Feel for the game is a work in progress
-Fairly limited offensive player at this point in time. Skill-level is not polished
-Prefers to face the basket. Doesn't have the footwork or mentality to take advantage of his height and strength advantage inside the paint
-Has had success from the high school 3-point line, but has funky (but consistent) shooting mechanics. Shoots a moon ball it from his fingertips with a low release point and little rotation
-Lacks a degree of awareness and physicality on the glass. Averaged only 7 rebounds in 25 minutes in the Nike EYBL
-May lack a degree of toughness. Allows himself to get pushed around at times. Doesn't always look fully engaged. Gets down on himself
-Looks like he's playing at half speed sometimes
-Mobile, but not terribly explosive. Can play above the rim, but not a high flyer. Not fast-twitch with his reactions to things happening on the floor

Outlook Son of former San Antonio Spurs player Jaren Jackson Sr. Played a fairly small role for USA, 14 minutes per game, mostly in garbage time. Looks like a lottery pick from a physical standpoint on first glance, and shows flashes of potentially developing into one down the road, but has a long ways to go at this point.
Read full article