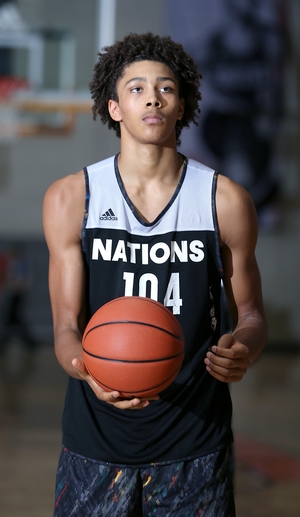 Strengths
-Projectable frame, big hands. Long arms. Proportionate upper and lower body. Should end up with a strong frame in time.
-Outstanding fluidity for a player his size. Gets up and down the floor quickly. Super light on his feet.
-Explosive leaper who doesn't need time and space to load up. Finishes above the rim with ease. Catches lobs regularly. Good in drop off situations.
-Not overly skilled offensively but his fluidity allows him to put it down from the perimeter at times. Gets low to the ground. Fairly crisp footwork.
-Budding offensive game inside of 15 feet - 65.2 2P% according to our database.
-Uses floaters regularly in the paint. Drops in right handed jump hooks and push shots despite the fact that he shoots jumpers (very rarely) with his left hand. Will make an occasional short-range turnaround jumper. Can finish with either hand. Leaping ability allows him to rise up over the top of his defender in 1-on-1 scoring situations.
-Fairly active on the glass  10.5 rebounds per 40 minutes in 15 games in our DraftExpress database. Good instincts on the offensive boards. Plays pretty hard overall. Knows how to find a body on the defensive glass and has the quick leaping ability to rebound in traffic.
-Fluidity, length and quick leaping ability allow him to make plays defensively  1.0 steals and 1.7 blocks per 40. Can improve his fundamentals and toughness but the tools are certainly there to make an impact. Quick twitch. Should develop into a good perimeter defender as he gains more experience.
-Although not the most physical player, he competes and plays hard more often than not.

Weaknesses
-A tad short for a center prospect at 6' 9. Projectable frame but isn't overly wide or bulky up top right now.
-Will take wild floaters from the elbows. Feel for the game isn't great. 0.7 assists per 40 minutes in 15 games in our DraftExpress database. A bit too sped up.
-Spot shooting mechanics need a complete overhaul. Super low release. Shoots a left-handed push shot although the majority of the shots he takes in the paint are with his right hand. Shoots it different almost every time.
-Not all that strong with the ball on the interior. Can get a little bit tougher. Gets pushed around at times. Can show more fight.
-Struggles a bit defending stronger bigs on the interior. Nice frame that will continue to fill out but he's not exactly a bruiser at this stage. Gives up paint touches.
-Jumpy on defense. Bites on slight head fakes too often.
-Doesn't quite have the size or body to defend centers consistently and lacks the fundamentals to guard on the perimeter at this stage. A bit too upright, doesn't always react to the initial move.
-Timing and instincts off the ball can improve.
-Can make more of a concerted effort to find a body on the defensive glass rather than just relying on his athleticism.
-Gets down on himself at times

Outlook
The 17-year-old Savage, Minnesota native wasn't overly productive at Adidas Nations and doesn't quite have a go-to skill at this stage but his frame, fluidity, explosiveness and occasional touch inside the paint are enough to make him worth tracking as he continues to develop. Players who can move and jump like Sims at his size don't grow on trees and he should be a very effective college player who could eventually have a shot at the NBA down the road if he's able to add more offensive skill and improve his feel for the game.
Read full article