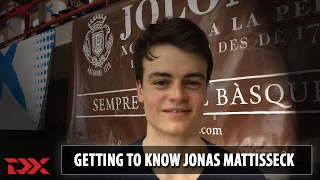 Strengths
-Nice physical profile for a point guard prospect at 6'4, with a fairly maximized frame. Strong upper and lower body.
-Impressive intangibles. Very competitive. Vocal leader. Rallies the troops really well for a player who just turned 17. Well spoken with a realistic view of his strengths and weaknesses.
-Has developed from more of a scorer into a true point guard. Manages pace and tempo. Moves the ball ahead in transition. Can make most of the necessary passes out of pick and roll  roll man, weakside shooter, strong side shooter, split and drop off to the dunker. Uses both sides of the floor.
-Shows flashes as a shooter. Can make a spot three or a pull up if the defense goes under, although he's quite streaky.
-Finds ways to get to his spots on the floor at this level. Not all that quick, but plays a herky jerky game that can get defenders off balance at times. Doesn't shy away from contact around the rim.
-Pressures the ball defensively. Uses his body well. Strong frame, not afraid to get physical. Fights over the top of screens. Active hands. Not overly rangy but competes on that end. Will take charges in the back court. Active off the ball  3.8 steals per 40 minutes.

Weaknesses
-Lacks length
-Has done a nice job maximizing his frame but how much room does he have to fill out?
-Average athlete in terms of leaping ability and burst. Struggles to turn the corner versus elite defenders. Doesn't have much wiggle with the ball. Could use more advanced combo moves to break down his man and take advantage of his passing ability.
-Struggles to finish versus length. Doesn't get great extension. Plays below the rim. Would benefit from adding more craft to his game in the paint  floaters, speed finishes, scoop shots.
-Can be a bit over-aggressive on the defensive end. Can do a better job of maintaining his emotions at times. Lack of length limits his upside a bit on that end. Not overly rangy.
-Very streaky shooter. Set shot off the dribble. Ball comes off the side of his hand rather than his index and middle fingers. Doesn't get consistent rotation. Not all that quick getting into it. Can improve his ability to create space consistently.
-Still has some decision making blips from time to time. Can get too deep in the paint without much of a plan. Doesn't always keep the defense guessing by changing pace.

Outlook
Mattisseck has made great strides since we first evaluated him at the U16s in Radom. His intangibles, basketball IQ and mental makeup have helped him make the jump to lead guard and really develop into an on court leader as one of the younger players on the team. Moving forward, Mattisseck's shooting stroke will play a big role in his long-term potential, as he's unlikely to turn into a freak athlete overnight, so he'll have to rely on his court vision, size and jumper to have an impact as a scorer and distributor in the half court. How Mattisseck's jumper and finishing around the rim develop over the next few years will be worth watching, because he already has a lot of the intangible attributes that you often can't teach.