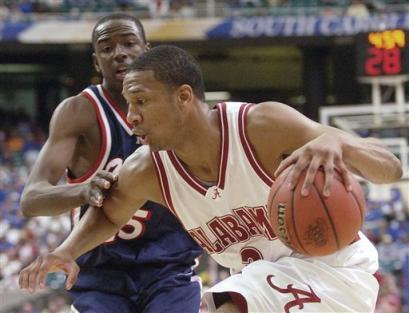 Jonathan Givony
@DraftExpress
Considered a likely first round pick before poor workouts and red flags surrounding his knee tanked his draft stock, Kennedy Winston has spent the past two seasons in Europe putting up solid numbers in Spain and Greece. Now a much better player than he was in 2005, theres a legit chance that a team takes a flyer on him on the free agent market. Winston is a silky smooth 6-6 shooting guard with a sweet stroke and the first step and ball-handling skills needed to create his own shot. Hes not the toughest guy in the world in terms of the way he finishes around the rim, nor is he a great defender, but he does have upside and this could be an opportunity for a team to bring him on board before he prices himself out of the NBA minimum next season.
Read full article

Strengths
A smooth and skilled athletic shooting guard who can score with the best of them. Winston has the type of game that looks tailor made for the NBA in terms of the moves he executes. Things that NBA rookies need to be taught or polished when they come into the league, like jab-steps, head and body fakes and triple threat scoring, have already been in his repertoire for a long time. Winston is a tremendously skilled player who makes very complicated moves look easy. He has solid athletic ability and is very fluid offensive player.

Winston has many tools he can go to to create space and get his shot off, and he uses them to score from all over the court.

He is a very tough player to guard because he can hurt you in so many different ways. His outside shot (48% for threes on the year) has become deadly this year and needs to be respected and even feared. He has a beautiful stroke now, with a quick release and does not need a lot of space to get his shot off. His improvement in all areas of shooting from his freshman to junior year speaks volumes about his work ethic. He went from shooting 37% from the field, 21% for three and 67% from the line as a freshman to 47% from the field, 48% for three and 77% from the line as a junior. What makes his numbers even more impressive is the fact that Winston doesn't take too many easy shots from a static, stand-still position. Many of them are of a high level of difficulty, off the dribble and/or fading away, but he still shoots an excellent percentage.

If Winston's man is guarding him too closely he will blow right by him with a very nice first step. Probably the best part of his game is his ball-handling skills. He dribbles the ball like it's attached to a string, and moves gorgeously with it in small areas to frustrate and confuse his man. He is very good at getting his man off balance, and his crossover dribble is deadly on the NCAA level. Alabama will regularly clear out the floor for him to take his man one on one, and Winston is very effective in this area. As mentioned above he has lots of moves he can go to, thanks to his outstanding footwork and how quickly he can change gears.

His mid-range game is solid as he likes to put the ball on the floor and elevate quickly for the pull-up jumpshot. He can also take the ball strong all the way to the hoop, slicing and spinning his way to the hoop, although (see weaknesses). Winston can also turn around quickly from the face up position and use his footwork to back his man down and score in the post.


Weaknesses
Winston is somewhat one-dimensional in the fact that he's mostly just a scorer. When he's not being aggressive there just isn't that much to his game. His defense isn't nearly as good as his offense, he'll often get burned on the perimeter and get lost off screens, and he isn't very as active as you would like to see him be. It doesn't seem like he puts in as much effort here as he does offensively, his steals, blocks and personal fouls have fallen off every year since his freshman season, despite the fact that his minutes have gone up. He can be slow to get out and guard the perimeter or to get back on defense at times as well. I don't think he's lazy; he just doesn't seem to place as much importance on this aspect of his game as he does on offense.


Winston displays characteristics of a role player and often doesn't use his terrific skills enough to help his team out. He does not look like a first option type player on an NBA team. He goes through long spurts where he is simply invisible, not looking for the ball and being somewhat passive on both ends of the floor. This passiveness has hurt his team this year on a few occasions when they sorely needed his scoring.

His off the ball movement isn't up to par and he isn't as active as you would like to see him be for such a deadly scorer. His motor is inconsistent as he'll sometimes be very active and intense and in other times he'll just simply drift for long periods. He is inconsistent not just within certain games, but overall throughout the season as well. He has had some tremendous games this season where he scored over 25 points, but has also had a handful of stinkers where he was held to single digits on poor shooting. This is somewhat normal for an NCAA player, though.

It would be nice to see him use his excellent tools to slash to the hoop and get to the line even more than he does right now. He has a tendency to settle at times for jump shots rather then taking the ball strong all the way to the hoop. Part of this might have to do with a lack of strength to finish at the basket, or maybe his knee problems are still in the back of his mind. Winston started the year noticeably stronger than the year before, bulking up to 230 pounds, but he appears to have shed a lot of that extra weight as the season progressed, although he does have a great frame to continue to add strength and help him be a bit more physical finishing at the basket and on defense if needed.

Winston is a very flashy and exciting player, but at times he'll overdo it and try to be a little TOO flashy, forcing up some extremely tough shots and causing unnecessary turnovers. He has improved a lot in this aspect this year, though. His passing ability is below average, and this is the main reason he'll never be confused for a tall PG despite his outstanding ball-handling skills.

Winston had a tough knee injury prior to his sophomore season, which required arthroscopic knee surgery, but he appears to be fully recovered and 100% healthy. His athletic ability appears to be back to what it was as a freshman, after noticeably slowing down as a sophomore right after he returned and playing through pain all season long.

Competition
Plays in the SEC, has made a very good case for himself to be named SEC player of the year this season, leading his team to a good record and tournament seeding. Helped Alabama reach the Elite Eight last year, losing to eventual NCAA champions UConn.

Outlook
Has said that entering the draft "is a very strong possibility." Which probably means he is an, as long as he is confident about being a first round pick after getting the right advice. Considering the lack of depth at the SG position, that should not be a problem for Winston if things go well in workouts and possibly in Chicago.

He is projected as a mid-first rounder before the NCAA tournament, but could work his way into the lottery if one of the teams needing a SG decides that he is their favorite. He probably will not slip past the early twenties as his shooting and athletic ability alone should be enough to keep him in the NBA for a while, but should still keep his options open and make an informed decision. He could be an important player for a long time if he decides to round out his game and develop more of a killer instinct.

Comments
"One thing I always liked about him, dating back to when I came to Mobile and watched him as a (young varsity player), he wants to win and he plays to win the game. He's a skilled player who has studied how to score." -Alabama coach Mark Gottfried.


"He's got the ability to put it down one or two dribbles, kind of play in a box, and get you off-balance where he can get the jumper off. He's been consistent with it all year. He knows how to get you off-balance, get you up in the air. When he's making that outside jump shot, boy, that makes them (Alabama) tough to defend." -Auburn coach Jeff Lebo.

"There are a lot of things that make him a good player. He can score a variety of ways. He can post you up and score. You have to guard him on the perimeter. He's got the ability to put it down and put you off balance. He has been consistent and knows how to play." -Auburn coach Jeff Lebo.


"Kennedy Winston is difficult to guard because he plays with a herky-jerky motion. He can create space. When he creates space between you and himself, it's over." -Florida coach Billy Donovan.

Originally enrolled at Cal, but managed to get out of his LOI, citing the health of his mother who got sick.
Read full article