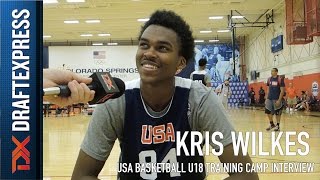 DraftExpress
@DraftExpress
Standing 6'7 in shoes with a 6'11 wingspan and a 199-pound frame, Kris Wilkes has nice size for a small forward.  Only adding 8 pounds to his frame over the last 2 years, Wilkes will need to get stronger to prepare himself for the rigors of the college game, and improving his frame could allow him to play some power forward at the next level down the road, something that would improve his versatility from a professional standpoint.
Read full article