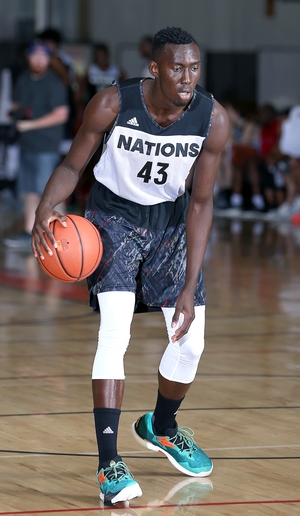 Leading the event at 28 points per game (nearly a point per minute), and helping his team to a fourth place finish, Lamine Diane had a breakout performance that will undoubtedly jump-start his college recruitment heading into his senior year at Findlay Prep. A product of Giving Back Academy in Senegal, Diane was uncovered at the 2014 NBA Basketball Without Borders Africa camp in South Africa, earning an invite to the BWB Global Camp in New York City over All-Star weekend the following February. He has made huge strides with his skill-level since, evidenced by his explosive scoring performances in Los Angeles, where he was one of the oldest players at the event.

Blessed with a strong frame, long arms, big hands, and solid athleticism, Diane is an extremely aggressive offensive player who loves to drive incisively to the basket, using an array of spin-moves and footwork to draw fouls out of isolation sets. His shooting stroke is long and somewhat unorthodox, but he finds decent results with it, throwing in 13 3-pointers in six games, albeit on pedestrian percentages (33%), partially due to his poor shot-selection.

Very ball-dominant, Diane is still figuring out how to operate in a team concept, as he tends to overdribble, lower his shoulder and try to bully his way to the rim using his superior strength, long strides, and tremendous length to help him get a shot off if he can't draw a foul. The fact that he's not freakishly athletic (especially in terms of explosiveness) will mean he has to continue to add polish and feel to his game. Tightening his ball-handling skills, learning how to operate without the ball, and becoming a more unselfish player will be big keys for him to reaching his full potential.

Defensively, Diane can cover ground well and has the length to emerge as a multi-positional stopper if he puts his mind to it, but tends to go through the motions at times on this end of the floor.

Diane benefited from the wide open nature of this camp, as well as the incredible amount of freedom he enjoyed to do virtually whatever he pleased offensively, but it's tough to argue with the results he saw. It's difficult to find lengthy wings in his mold who can put the ball in the basket, as well as display good potential defensively, so he is certainly a player to monitor heading towards the college level.
Read full article