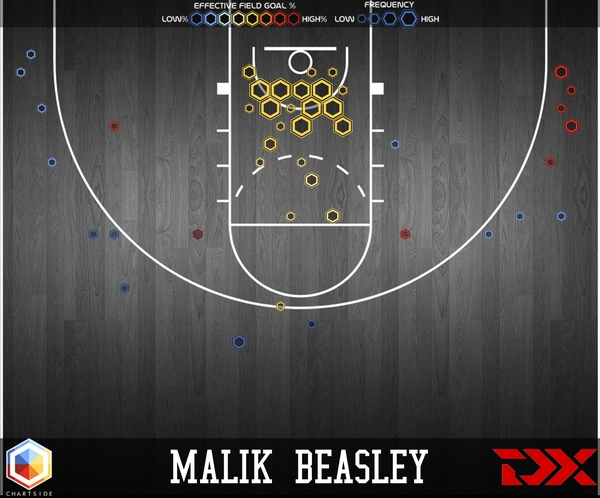 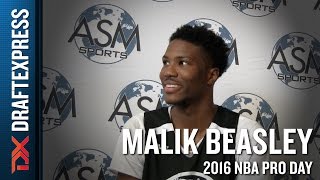 Mike Schmitz
@Mike_Schmitz
This article was originally published on the Vertical on February 8th. Find it here in it's original format.

Mike Schmitz of DraftExpress was in Winston-Salem, N.C., on Feb. 6 to scout Florida State's Malik Beasley against Wake Forest.

Malik Beasley wasn't a 2015 McDonald's All-American and wasn't chosen to the Nike Hoop Summit USA Team. He never played in any FIBA National Team tournaments and ended his senior year ranked as the 36th best high school player in the country by the Recruiting Services Consensus Index.

Now 23 games into his freshman season at Florida State, Beasley has steadily become one of the most productive and efficient freshmen in all of college basketball. Among RSCI 2015 Top 100 recruits, Beasley is third in points per game behind likely No. 1 pick Ben Simmons and potential lottery pick Jamal Murray. Beasley is scoring at an extremely efficient clip, and doing so in the storied Atlantic Coast Conference. He scored 23 points (16 shots) against Louisville, the second-best defense in the country according to KenPom.com. He scored 17 points (10 shots) on defensive juggernaut Virginia, and 20 points (17 shots) on Iowa, the 11th-best defensive team in the country, efficiency-wise.

Beasley has scored 20 points or more nine times this season and has scored in double figures in all of his collegiate games. Needless to say, Beasley has been consistent, efficient, and productive, and NBA scouts are certainly starting to take notice of the freshman from Alpharetta, GA.

Beasley is scoring at a historically efficient rate uncommon among players his age in the ACC (stats from the DraftExpress Database):

 Since 1992, only two ACC guards have averaged more than 17 points per game while posting a true shooting percentage over 60 percent: Kyrie Irving (11 games played) and Malik Beasley.

 Since 2000, only nine ACC guards under the age of 20 have averaged more 17 points per game. Of those nine, only three shot over 50 percent from 2-point range and 40 percent from 3-point range: Irving, Beasley and Rashad McCants.

 Beasley is the only freshman guard in the country scoring more than 20 points per 40 minutes while shooting over 55 percent from 2-point range and 40 percent from 3-point range.

Standing 6-foot-5 with a 6-foot-7 wingspan, Beasley doesn't quite have elite physical tools for an NBA shooting guard but he's an impressive athlete, excellent shooter and aggressive slasher who brings an energetic approach to the floor.

Beasley does a lot of damage in the open court  26.9 percent of his offense, according to Synergy Sports  by using his speed to sprint to the rim and his explosiveness to catch lobs or hammer home tomahawk dunks. Although not the most polished ball handler, Beasley is more than capable of grabbing a rebound and getting to the front of the rim himself. Florida State plays at the 30th-fastest pace in the NCAA, according to KenPom.com, and Beasley's athleticism is a big reason why.

In the half court, Beasley plays a simple and efficient game, one that's predicated on catch-and-shoot jumpers, one- or two-dribble pull-ups, straight-line drives and movement without the basketball. Beasley has the eighth-best true shooting percentage among 38 guards in the DraftExpress Top 100, a result of not only his shooting stroke and finishing ability, but also his focus on playing within himself.

As a shooter Beasley is very sound mechanically, showing outstanding shot preparation before the catch, tremendous balance, quick elevation as he goes into his motion, and a clean wrist action at the top of his jump that produces a healthy amount of back spin. Beasley can shoot off the hop or after planting one foot after another, an important skill for shooting on the move and under duress.

With defenders having to respect Beasley's catch-and-shoot jumper, which yields 1.175 points per possession, he's able to use his athleticism to attack scrambling defenders to get into a mid-range pull-up, floater or finish at the rim. Beasley displays the same impressive mechanics on his pull-up that he does on his catch-and-shoot jumper, which should help him become more of a versatile scorer as his ball-handling improves.

The final part of Beasley's scoring arsenal comes in the paint, where he employs his explosiveness and aggressive nature to finish at the hoop or get to the line. Beasley also shows flashes of a floater that he's able to mix in when a help-side defender is loading up to take a charge or the rim protector is in perfect position.

Although he's not much of a shot creator at this stage, Beasley's ability to score efficiently is certainly a coveted skill in today's NBA.

Beasley also plays with a motor you don't always see out of 19-year-old freshman with his skill level and athleticism. He's a very good rebounder for his position  7.1 per 40 minutes with pace adjusted, ranking fifth among DraftExpress' Top 100 guards  and flies around on the defensive end. He moves without the ball offensively and plays an unselfish brand of basketball.

Beasley's overall intangibles are most certainly a positive. Watching him warm up an hour before the game you can see his personality when he's on the floor. The son of actor Michael Beasley and actress Deena Beasley, Malik is very engaged with teammates, yet locked in when it's time to get shots up. Beasley comes from an excellent family, really competes and his development curve speaks to his work ethic. Overall, there's certainly a lot to like about Beasley as an NBA two-guard prospect.

Beasley checks a lot of boxes as a prospect, but the 19-year-old needs to get better as a shot creator, playmaker and defender. Possessing average physical tools for an NBA two-guard, scouts will want to see Beasley make plays off the dribble as a scorer and distributor. Beasley won't be able to rely on his size to score in the half court at the next level, making his development as shot creator that much more important.
As it stands now, Beasley is a rudimentary ball handler who struggles to go get a bucket when his first move is taken away. Although partially due to FSU perimeter players Xavier Rathan-Mayes and Dwayne Bacon dominating the ball, the fact that isolations make up only 1.4 percent of Beasley's offense shows where he stands as one-on-one scorer. He's limited to mostly straight-line drives and doesn't change speeds or directions all that comfortably, scoring just 0.6 points per possession out of pick-and-rolls.

Finding ways to create space off the dribble with his handle, quickness and footwork like physically similar NBA guards Bradley Beal and Kentavious Caldwell-Pope will go a long way in determining how effective Beasley will score at the NBA level.

Improving as a distributor would also open up the floor for Beasley and allow him to operate as a secondary ball handler in pick-and-rolls, something most NBA teams ask out of their two-guards. Beasley has a solid feel for the game, but he's not all that comfortable keeping his dribble alive against pressure or delivering the ball on the move. Beasley turns over the ball on 28.6 percent of pick-and-roll possessions. Given his natural feel and efficient style of play, Beasley should be able to improve in this area as he gains more experience and confidence as a ball handler.

While Beasley is fairly under control on the offensive end, he's reckless and takes chances defensively. Too often he puts his teammates at a disadvantage by trying to jump the passing lanes to get steals or swipe at the ball when he's the primary defender. Beasley also has a couple of technical issues to clean up as an on-ball defender, but the fact that he plays with such energy is a positive moving forward.

Beasley has done a fairly nice job of getting stronger over the last couple of years, but he still doesn't possess a massive frame, much length or elite size, and figures to have some struggles defending bigger NBA shooting guards. Beasley defends point guards quite a bit for Florida State. If he is able to find a way to defend NBA lead guards effectively, it will make him a much easier fit defensively.

Having flown slightly under the radar, Beasley has now played his way onto NBA draft boards, ranking 30th in the DraftExpress Top 100 and is projected to be selected 18th overall in the 2017 DraftExpress Mock Draft. Despite his production, Beasley certainly isn't ready to step into the NBA right now as a rotation player, and there are definitely several things he can improve upon with added experience at the collegiate level. But if Beasley were to test the waters this year, he would absolutely garner quite a bit of interest based on his production and would look good in workouts with his athleticism and shooting stroke. Beasley may be a year away, but he's without a doubt helped improve his stock through the first 23 games of his freshman campaign.
Read full article