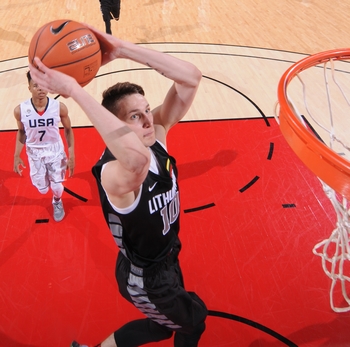 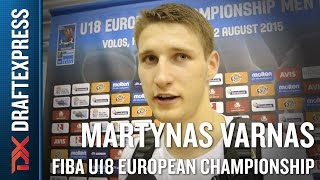 Strengths
-Solid size for a two-guard at 6' 6
-Decent leaper in space.
-Has some touch from the perimeter with his feet set despite fairly untraditional mechanics. Gets good rotation. Has some range.
-Capable passer in drive and kick situations. Can play with the ball a little bit.

Weaknesses
-Thin at 180 pounds. Frame isn't great.
-Average athlete.
-Below average length  6' 6.25 wingspan. Lacks defensive potential.
-Loose handle. Not the most polished shot creator.
-Lacks versatility as a shooter. Not nearly as effective on the move.
-Turnover prone vs pressure.
-Inconsistent shooter. Doesn't always finish his follow through. Stroke is a bit mechanical.
-Struggles to finish through traffic.

Outlook Varnas proved that he can make shots off the catch but the rest of his game was fairly inconsistent throughout most of the week. Although he's a capable passer, without elite length/frame, athleticism, and shot creating ability, it's tough to consider Varnish a high-level NBA Draft prospect at this stage of his development, unless he can find a way to be very productive at the senior levels of Europe before he becomes automatically-eligible.
Read full article

Lacking great length and possessing fairly small hands, Varnas does not stand out from a size perspective.
Read full article

Strengths:
-Not overly tall for a wing, but has a strong frame and some athleticism. Can play above the rim
-Versatile player for his age. Was Lithuania's primary ball-handler and shot-creator in the half-court at U18s
-Makes catch and shoot 3-pointers. Hit 41% of his shots with his feet set
-Utilized quite a bit in pick and roll and one on one situations. Has nice body control and solid ball-handling skills
-Solid basketball IQ. Finds open man nicely in drive and dish situations. 4.8 assists per-40 at U18s

Weaknesses:
-Lacks a degree of size
-Outside shot is a bit mechanical. Not the most fluid or smooth release
-Struggles to make shots on the move or off the dribble. Shoots a very flat shot when heavily contested
-Really struggled to convert plays inside the arc at the U18s. Hit just 35% of his 2-point attempts. Struggled both in mid-range and inside the paint in the half-court. Doesn't have elite size, length, strength or explosiveness.
-Average defender. Does not have great tools on this end of the floor. Does not make up for it with great intensity or awareness. Late on closeouts. Doesn't fight through screens

Outlook: Played a very heavy ball-handling role for Lithuania, which he may not have been best suited for skill-wise. Shows some nice versatility for a player his size, but lacks a degree of upside to be considered an elite-level talent.
Read full article