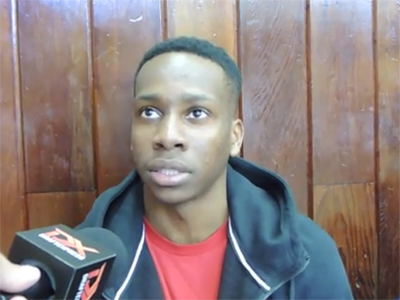 Coleman, the 6'2 guard out of Norfolk Virginia, put together an impressive all around performance in Valdivia, posting per 40 averages of 13.7 points, 8.1 rebounds, and 7.7 assists. Coleman's best skill his is speed, as he possesses tons of burst in the open court, getting into the paint at will once he has a head of steam. He is a creative and shifty ball handler, and although he is not yet a true point guard, he has the skills to be one down the line. To compliment his speed and ball handling abilities he is also already a capable spot up shooter, who knocked down 5 of his 12 attempts from deep throughout the competition. As dynamic as Coleman is with his speed, he can sometimes get out of control, barreling into the paint with his head down, and forcing tough shots or turnovers. Once Coleman learns to play with appropriate pace he has the vision and ball skills to be very effective point guard in the half court. Coleman was very effective in the FIBA setting, and he will continue to develop his all around game as he plays under the more confined settings of Oak Hill Academy.
Read full article

Outlook The Oak Hill Academy guard has some things that you can't teach. He's a blur with the ball, shifts gears with force and ease, and shows enough playmaking potential to envision him developing into more of a full-time lead guard in time. His fast-twitch athleticism also allows him to play the type of pressure defense that every college coach covets. With that said, Coleman will have to continue to improve his jumper, feel for the game and decision making in order to maximize his potential and play a more consistent brand of basketball. Coleman could develop into a more interesting prospect as the game slows down for him and he finds a more consistent jump shot.
Read full article

Over the course of four games Coleman proved his worth as a shifty, attacking combo guard who can really finish in the lane over length. Coleman was the only point guard to finish in the Nike Global Challenge Top 10 in field goal percentage, as he shot 53.8% from the field and a terrific 63.3% from two on 33 attempts.

Coleman's efficiency inside the arc speaks to his ability to finish in the paint despite weighing only 168 pounds, sporting a 6' 4 wingspan and being much more quick and shifty than vertical. Coleman didn't just feast on open lanes and short rim protectors. He does a really nice job using his body around the rim, is able to mix in floaters, and even flashed some of the crafty wrong foot layups and speed finishes you rarely see out of players at the high school level.

Coleman has excellent burst to help him get into the paint, and can stop and start on a dime. The rest of Coleman's offensive game, however, has quite a bit of room for improvement. He's a limited outside shooter, and while he showed some creativity as a distributor, he's much more fixated on scoring the ball at this stage of his development.

On the flip side, Coleman proved to be one of the best perimeter defenders at the camp. He plays with tremendous energy, moves his feet extremely well, and while still very light, has a decent frame that should fill out more in time. Coleman is more of a 6' 2 slashing combo than a pure point guard right now, but with his speed, savvy finishing ability and perimeter defense, the 17-year-old is surely worth tracking as he continues to progress and develop other areas of his game.
Read full article