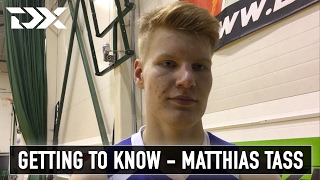 Strengths
-Led the entire cup in PER  48.2 over three games. Averaged 31 points, 12.9 rebounds, 1.4 assists, 2.4 steals and 3.3 blocks per 40 minutes while shooting 77.1% from two and 88.9% from the free throw line. Highest PER in tournament history since we first started tracking the event in 2007 (min. 20mpg).
-Naturally strong frame that has room to grow  6' 10 230 pounds. Solid length
-Moves well for his size. Not a freak athlete but can get up and down. Nimble diving to the rim.
-Really effective as a pick and roll finisher despite not being a regular above the rim finisher. Sets hard screens, shows great timing as a roll man, has fantastic hands, finishes with soft touch using either his left or his right. Keeps the ball high.
-Excellent passer in short roll situations. Has a great feel for the game. High IQ player in general. Can DHO on the perimeter. Patient passer out of the post. Uses both sides of the floor.
-Can score on the block with basic jump hooks and will mix in an occasional counter.
-Shows potential as a shooter. Sound mechanically. Ball comes out smoothly with soft touch and nice rotation. Still gaining confidence in this area but should be able to step out more in time.
-Excellent instincts as a rebounder. Can use his natural size to carve out space. Tips the ball to himself and teammates. Quick to the ball. Plays hard.
-Smart and competitive positional defender. Will battle in the post, holds his ground and stays down on fakes. Good enough feet to hedge and recover out of ball screens. Reads the eyes of the guard in pick and roll drop situations. Active hands. Racks up steals and blocks despite not being an overly explosive athlete.
-High intangibles player. Great student. Good teammate.

Weaknesses
-A shade undersized for a center prospect at around 6' 10 tops.
-Strong but could stand to cut up his frame a little bit
-More mobile than explosive. Plays mostly below the rim in the half court at this stage. Good not great length.
-Doesn't stretch the floor all that much right now, although he should improve in the future. Not a consistent threat from the perimeter as a shooter or straight line driver.
-Has a tendency to defer a little bit too often on post touches. Looking to facilitate rather than attack.
-Can score in the post with basic jump hooks but isn't all that advanced, especially against same-sized bigs. Can add more creativity on the block.
-Lack of elite standstill explosiveness could limit him as a defensive rebounder and rim protector at times as the level of competition rises.
-Can improve his ability to defend the perimeter consistently both versus stretch bigs and as a pick and roll switch man.

Outlook
Tass was far and away the most productive player at the Baltic Cup, as his size, skill level, competitiveness and basketball acumen really stood out. The 17-year-old is quite experienced for his age, having spent last year with Limoges in France and this season practicing (and playing some Estonian League and VTB League minutes) with Kalev. Tass' natural size, basketball IQ, toughness and skill set give him a great framework to build off in the long term. In terms of his NBA outlook, he'll have to continue to develop his jumper and all around scoring repertoire to up his chances, as he doesn't have elite physical tools for an NBA center.
Read full article