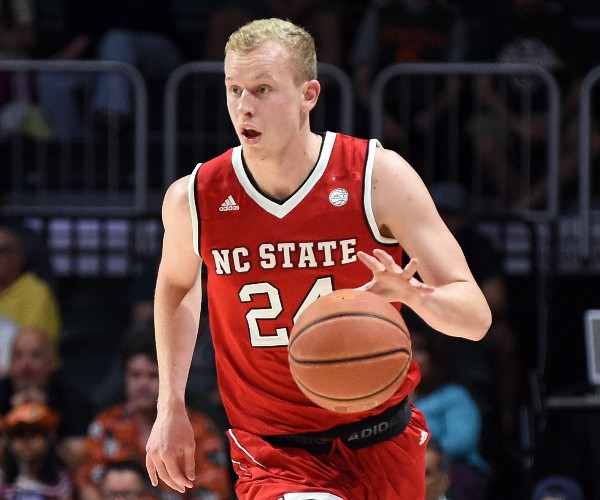 Rowan didn't have the most efficient tournament, shooting 38.5% from two and 27.6% from three, but he certainly impressed with his basketball IQ and role player potential moving forward. Rowan was very streaky shooting the ball during the four game stretch, but his percentages aren't necessarily indicative of the type of shooter he is.

The 6' 7 wing possesses tremendous mechanics, very good balance and a quick trigger that doesn't leave much room for error. Rowan isn't all that adept at creating space off the bounce but he can make a one or two dribble pull up versus a closeout or drill a triple as the pick and roll ball handler if the defender goes under. Needless to say, Rowan is going to shoot the ball at a high level and do a lot of nice intangible things to boot.

Where Rowan really impressed was as a passer and decision maker. He rarely turns the ball over and possesses excellent vision and quick instincts both from a standstill and on the move. Although he's not a primary ball handler, when he receives the ball on the wing in the half court or transition he always plays with his head up and sees plays developing a step ahead of the defense. Some of this has to do with Rowan's age and experience level (he's already 19) but he without a doubt possesses some of the best passing instincts for his position at the tournament.

Rowan also impressed with his instincts on the defensive end. He does a nice job making plays in the passing lanes and is a very keen off ball defender. Rowan does struggle staying in front of quicker, more athletic wings, as he's fairly hunched in his upper body, but his size and solid frame helps him space defend and cover ground on closeouts.

Rowan isn't a poor athlete he flew around and almost hammered home a handful of transition dunks and attacked an occasional closeout but he struggled finishing around the rim and should be considered an average athlete once he gets to the college ranks.

Rowan is still fairly one-dimensional as a scorer, but his size, shooting ability and overall basketball IQ should help him fill a role instantly at the college level and continue to develop his game from there.
Read full article

Strengths:
-Good size for a wing at 6-6 or 6-7
-Solid frame and wingspan
-Very good shooting mechanics, quick release
-Can make shots both with feet set and pulling up off the dribble
-Extremely reliable catch and shoot threat
-Finds ways to score inside of the arc, finishing in transition, attacking closeouts, etc
-Shot 88% from the free throw line

Weaknesses:
-Body is still filling out
-Average ball-handler in half-court situations. Very upright in his first step
-Struggles to create his own shot against set defenses
-Doesn't look to create much for others
-Shot-selection can be questionable at times
-Defensive potential is a question mark
-Average lateral quickness.

Outlook: Son of former NBA draft pick and longtime European pro Ron Rowan (Notre Dame/St. John's). Confident, aggressive scorer with solid instincts for putting the ball in the basket. Averaged 19 points in 27 minutes per game at the adidas Gauntlet on 45% shooting from beyond the arc. Needs to continue to round out his game on both ends of the floor to prove that he's more than just a spot-up shooter for the highest levels of basketball.
Read full article