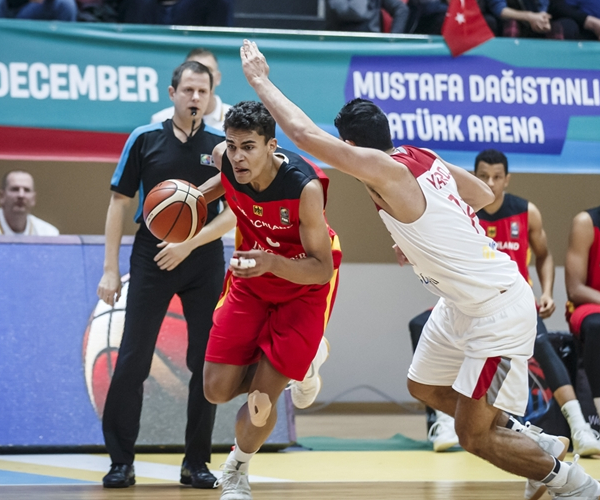 Getting to Know: Oscar Da Silva

Corey Porter
@DraftExpress
German forward Oscar Da Silva discusses his strengths and weaknesses at the U18 European Championship, with accompanying video from the tournament.

Strengths:
-Tremendous physical profile. 6'9 without shoes with a 7'1 wingspan and terrific 220 pound frame that will fill out considerably in time. Big hands.
-Fluid athlete. Light on his feet. Covers ground impressively.
-Makes an impact without plays being called for him. Fill in the blanks guy who scores off cuts, offensive rebounds and rim-runs
-Can handle the ball in the open floor or attack slower defenders in a straight line in the half-court. Has long strides and soft touch off the glass
-Shows potential as a floor spacer. Has a consistent release point and good wrist action. Likely something he can develop in time
-Has a very good feel for the game. Makes extra pass along the perimeter, without hesitation.
-Rebounds out of area on both ends of the floor, and then pushes ball nicely up the floor with the pass or dribble.
-Averaged 4.7 offensive rebounds per-40 at the U18s
-Shows impressive versatility defensively. Covers a ton of ground and shows the potential to guard all over the floor. Can put pressure on ball-handlers, trap in the backcourt, deny off the ball intelligently, or close out on shooters for blocks behind the 3-point line.
-Playmaker defensively, averaged 1.9 steals and 2.2 blocks per-40
-Has strong intangibles. Highly intelligent off the court. Good teammate on it. Very positive presence on the floor. Brings a calmness to the team. Plays with great energy. Seemingly never gets tired

Weaknesses:
-Still at an early stage of maturation physically and skill-wise
-Limited offensively at this stage. Doesn't have a consistent means of putting the ball in the basket
-Average ball-handler. Relegated mostly to straight line takes. Gets knocked off his path easily. Doesn't have much of a plan if his first step gets cut off
-Lacks a degree of toughness, explosiveness and aggressiveness as a finisher. Struggles to convert plays around the basket at times
-Still figuring out how to use his size in the paint. Not unwilling, just doesn't have the body or strength to do so yet. Rudimentary footwork.
-Jumper is at an early stage of refinement. Career 59% 3-point shooter in international play. Has made just three 3-pointrers in 13 games.
-Doesn't shoot on the hop. Jumper takes a while to get off
-Struggles to guard on the interior. Can't always hold his ground against stronger players. Gives up deep post position and gets backed down.

Outlook: Son of a professional boxer from Brazil. Late blooming combo forward committed to Stanford. Has grown significantly the past few years, helping him emerge onto the national team radar. Made his first official appearance at a FIBA Competition here at the U18s, and showed a ton of intrigue with the potential to get significantly better in time. Started at small forward despite standing 6'10 in shoes. Appears to be nowhere near his peak physically. Should be able to get more athletic in time with a good strength program. Could easily top out as a guy who plays both interior spots, spaces the floor, switches on pick and rolls and makes plays using his high basketball IQ. Could very well end up being one of the top prospects seen at this tournament.
Read full article