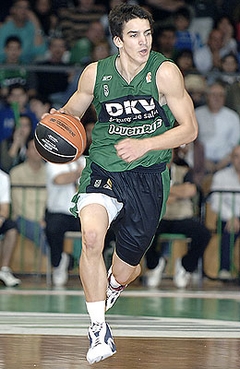 Jonathan Givony
@DraftExpress
With Ricky Rubio out for most of the season thus far, Pau Ribas has been forced to shoulder a bigger role for DKV Joventut this season, seeing significant time as the teams primary ball-handler. The result has been a large drop in shooting efficiency alongside a large gain in assists produced, but all in all its hard not to respect the level hes playing at his tender age.

Ribas is a player with very specific strengths and weaknesses. Incredibly smart, and highly opportunistic, he can really shoot the ball from the perimeter, despite his average percentages this season. He sees the floor well and does a great job getting everyone involved unselfishly, having somewhat of a calming influence on what otherwise becomes a somewhat chaotic team at times when things begin to break down. He also plays with a good deal of focus and intensity, which lends itself to the defensive end as well, although not always with the best results due to his average physical tools.

Ribas is a fairly poor athlete with a frame that is extremely underdeveloped at the moment. He often lacks the quickness needed to create his own shot, and thus is a bit limited when asked to shoulder the majority of his teams ball-handling duties in end of shot-clock situations, particularly asked to break the defense down off the dribble. His lack of strength makes it a bit difficult for him to finish strong at the basket, and the majority of his field goal attempts come from beyond the arc, which makes him a bit predictable. That same lack of strength and athleticism can be a hindrance in certain defensive matchups as well, as quicker, stronger guards can take advantage of him at times.

As far as the NBA is concerned, Ribas is unlikely to interest most NBA decision makers due to his limited upside. For Europe, though, he looks like a very high-level player and will likely be on the radar for quite some time, thanks to his high skill level and terrific feel for the game.
Read full article

Scouting the NBA Draft Prospects at the 2008 Copa del Rey

Jonathan Givony
@DraftExpress
Coming off an excellent ACB showing, Ribas continued enjoying playing opportunities in this Copa, and he did take advantage to showcase his solid perimeter stroke.

Although a point guard, when Ribas is on the court he usually officiates as an off guard, as it happened in the Copa. He's basically asked to be intense on defense and hit open shots. Still, he often shows a lack of confidence when it comes to executing any offensive plays. Not this time in the shooting department, as he seems to have gained confidence in this regard. In the Copa, he basically settled for spot-up jumpers (he enjoys three-point range), but he can easily go for pull-up shots.

Where Ribas struggled to get things done is whenever he decided to put the ball on the floor to attack an opponent. Not being a very explosive player, the lack of confidence he shows in his slashing abilities is hurting him, as he gave up the surprise factor with tentative moves. He also became a little bit predictable driving and dishing the ball the same way twice, having the ball stolen in the second.

Not blessed with amazing potential, Ribas still has the makings of an excellent European player. He just needs to gain experience and, obviously, continue working on his game.
Read full article

Luis Fernández
@DraftExpress
Quietly growing in Joventut during the last campaigns under the shadow of Ricky Rubio, but making constant strides for many years now, Pau Ribas is evolving into a very nice point guard, to the extent that Joventut decided this season to let Elmer Bennett go, loan Marcelinho Huertas, and sign only Demond Mallet (who is more of an off-guard anyway) to replace them in the backcourt. Therefore, Ribas finds himself as the second true playmaker on the team, with an awesome opportunity to play heavy minutes for coach Reneses, who loves deep rosters and intensively rotating his players.

A silver medalist this summer at the U-20 European Championship, teaming up with Sergio Llull at the point guard position, Ribas doesnt enjoy the athletic exuberance that his countryman is showing lately, so he might go more unnoticed on the court. But hes actually a rather complete player, displaying excellent size, solid athleticism, and the ability to both score and run his teams offense. Hes indeed a player you can put on an ACB court and expect to do his job, which is quite a positive statement considering the level of competition were talking about. Thats what happened this past weekend, with Rudy Fernández out of the team, he was in charge of filling some of that open playing time in the backcourt, and came up with an extremely solid game, going for 10 points (4/5 from the field), 5 rebounds, 3 assists and 3 steals with only 1 turnover in about 24 minutes of playing time.

2666
Standing 6-4, with a nice wingspan and being fairly strong, Ribas is right where he needs to be in the physical department in order to compete at the European level. A solid ball-handler, hes not an explosive-type of guard to light his opponents up off the dribble, but a sober playmaker who can attack his match-ups going both ways while displaying nice directional changes. He often uses screens, while nicely combining his shooting stroke and passing ability, usually showing notable decision making. Hes a very fluid shooter, creating separation off the dribble naturally, and with three-point range. And if not an extremely creative passer, he can find his teammates and play with his brain. He is quite a dangerous player in the pick-and-roll, where he can fire off-the-dribble if hes granted space, or feed the rolling man if his shot is contested. Hes a player to work within the team flow, a smart guy who understands the game and takes advantage of favorable situations, also a solid defender, in general a willing player who displays the right attitude on the basketball court.

Ribas is not oozing with untapped potential, but hes a guard you can comfortably predict a long and successful career at a high European level if nothing strange happens. Beyond that, lets not put limits on his potential achievements. He has a solid physical presence, hes skilled, hes smart, he seems a hard worker, and experience has often showed us that with talent, a clairvoyant mind and the right desire, you can get really far, even with only decent athletic tools.
Read full article