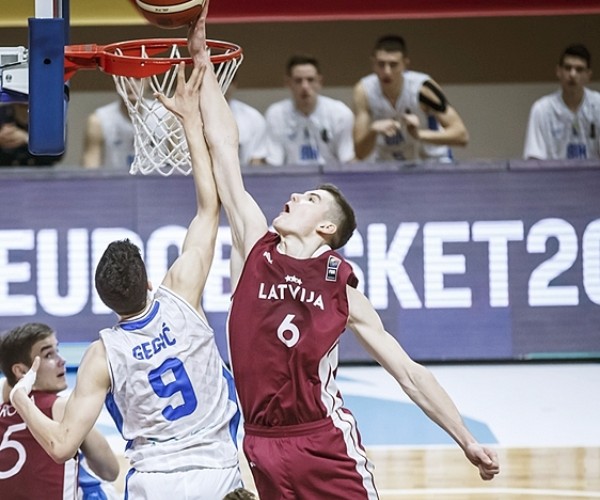 Getting to Know: Roberts Blumbergs

Corey Porter
@DraftExpress
Latvian power forward Roberts Blumbegs discusses his strengths and weaknesses at the U18 European Championship, with accompanying video from the tournament.

Strengths:
-Has an impressive physical profile. 6'10 in shoes with a strong frame and solid length.
-Smooth and fluid athlete who can play above the rim off two feet
-Shows a fairly versatile skill-set for a modern day power forward.
-Really nice looking catch and shoot stroke. Ball comes out of hand really nicely for 3 on kickouts.
-Hit 10 of his 22 3-point attempts at the U18s in six games.
-Can put the ball down and attack closeouts in a straight line, sometimes even finding the open man off the bounce
-Team player who is more than willing to make the extra pass
-Shows soft touch around the basket. Shot 61% for 2 at this tournament
-Has the ability to cover ground nicely defensively. Gets out to contest shots on the perimeter.
-Averaged 12 rebounds per-40, in line with his averages at all three FIBA tournaments he's played at.

Weaknesses:
-Doesn't know how to use his size to his advantage at this stage. Sets soft screens and struggles to operate with his back to the basket, even with much smaller players on him.
-Uses his right hand on the left side of the basket
-Has a degree of passivity, passing up open shots and deferring to far-less talented teammates, even when his team needed him to be aggressive. Gets down on himself easily.
-Has the tools to be a good defender, but not the technique or fundamentals yet. Lacks experience in that area. Feel/awareness is average, as evidenced by his paltry 1 steal and 1 block per-40 minutes at the U18s.
-Career .9 blocks per-40. Has the tools to do more in this area.
-Shot just 64% from the line at the U18s. Career 65% in national team play.
-Has a bit of a wind-up to his spot-3. Doesn't step into them or shoot on the hop

Outlook: Blumbergs started off the tournament slowly, but really came on down the stretch, particularly in Latvia's final two games which they needed to win in order to avoid relegation to Division B. He ended up finishing the tournament #2 overall in PER, posting an excellent 21 points and 12 rebounds per-40 minutes pace adjusted, on good efficiency (65% true shooting percentage) Blessed with strong physical tools and the skill-set many teams look for from a stretch four-man, Blumbergs is someone teams will want to monitor in the coming years.
Read full article