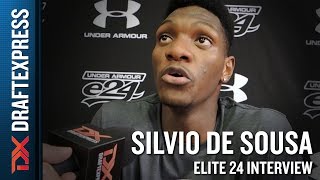 Matt Williams
@DraftExpress
A player we received measurements for over each of the last three years, IMG Academy (FL)'s Silvio De Sousa has actually leaned down a bit from last summer, tipping the scales at 242 pounds after weighing in at 256 pounds last fall. Standing 6'8 in shoes with a 6'10 wingspan. The Angola native has a uniquely mature frame for a high school prospect and shares some physical similarities with Julius Randle who measured 6'9 in shoes with a 7'0 wingspan at the 2014 NBA Draft Combine while weighing 250 pounds and posting the same 8'9.5 standing reach that De Sousa did at the first session of UAA. Throwing down almost five dunks per game for the Florida Vipers, De Sousa isn't overwhelmingly long, but is a highly explosive athlete inside.
Read full article

Matt Williams
@DraftExpress
It isn't surprising to see IMG (FL) standout Silvio De Sousa hold down the top spot in Estimated Wins Added in the UAA this year among four other seniors-to-be.  A consensus top-25 players in the class of 2018 being recruited by a who's who of college programs, De Sousa posted one of the highest EWAs at last summer's FIBA Africa U18 Championship playing for Angola thanks in large part to his imposing combination of strength, quickness, and explosiveness.  PER, which EWA is based on, frequently favors productive big men, and De Sousa's chiseled frame, dominance on the offensive glass and work as a finisher in transition distance him from the pack here. He's improved his skill-level as of late, showcasing a budding jump-shot, improved footwork as a slasher and post-up threat, and a focus on crashing the defensive glass and pushing it himself in the open court.
Read full article

Mike Schmitz
@Mike_Schmitz
Highlights of 6-8 Angolan forward Silvio De Sousa from the 2015 Basketball Without Borders Global Camp in New York City during NBA All-Star Weekend.More NBA Basketball Without Borders Coverage
-Rosters, Preview and Camp Analysis
-Jamal Murray Highlights
-Lauri Markkanen Interview and Highlights
-Dragan Bender Interview and Highlights De Sousa recently landed at Montverde Academy in Florida, one of the top high school basketball programs in the US, where he's only been classified as a freshman.

He came to the attention of NBA scouts last summer already at the U17 World Championship in Dubai, impressing throughout the tournament but particularly with a 17 point, 7 rebound outing against a stacked USA Basketball littered with future NBA players. This, despite the fact that he was only 15 years old at the time, playing up against prospects (on paper) almost two years older than him at times.

De Sousa had a very strong weekend in New York, showing strong athletic ability and a mature frame that belies his age. He was one of the most competitive and aggressive prospects in attendance, repeatedly posting up bigger and older players with solid footwork, going out of his area for rebounds, and making plays defensively using his length and athleticism. His outside shot looked smoother and more consistent than it did this past summer, and he seemed to have no problem stepping out to the mid-range and knocking down jumpers, even flashing range extending out to the 3-point line at times.

With his ripped frame, De Sousa looked like someone that could step out on a college court in the not too distance future, so the fact that he is currently slated to play high school basketball for another three years plus drew some animated responses from NBA scouts in attendance.

While he's somewhat of a combo forward at this stage, not quite big enough to be a full-time power forward, the improvement he showed in his ball-handling and perimeter shooting ability leaves plenty of room for optimism for the future. If he grows another inch or two, which seems feasible if he's indeed only 16, then he could develop into a very interesting prospect. Even if not, his skill-level should continue to improve, and he shows plenty of promise defensively already.

Highlights:
(Video may not load with Internet Explorer. Use Chrome or Firefox)
Read full article

Matt Williams
@DraftExpress
-Angolan forward Silvio De Sousa is listed as the youngest player scheduled to be in attendance, though he played so well at the U17 World Championships, and looked so physically mature for a 15 year old, that some scouts questioned his true birthdate. A 6'8 forward with a strong frame and a good motor, he average 14.1 points and 9.4 rebounds per game despite not turning 16 until a few months after the event. A bit undersized for a big man, this will be the first time many scouts will have seen him since last summer as he remained in his home country playing for domestic power Primeiro de Agosto. If his age is legitimate, scouts will be closely monitoring his improvement. Spanish team Gran Canaria was reportedly interested in signing him (and U17 teammate Bruno Fernandes) last month.
Read full article