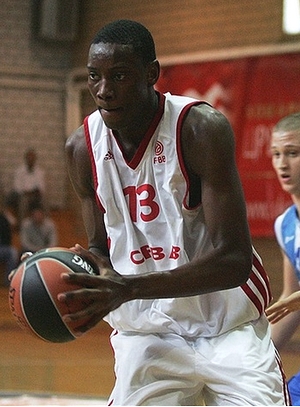 Matt Williams
@DraftExpress
Gombauld is an undersized power forward who brings tremendous energy to the floor. A terrific rebounder and defender, scouts will be monitoring Gombauld to see if his skill set will allow for a transition to the perimeter sooner rather than later. With a ripped frame and impressive athleticism, he was an early bloomer at the NIJT settings already two years ago, despite just having turned 16, and while he continues to put up impressive numbers at the junior level, there are some question marks about how his game will translate to the senior level since he's neither grown, nor developed an outside shot.
Read full article

Strengths:
-Long wingspan and gigantic hands
-Very good athlete. Quick and explosive
-Terrific transition scorer and all-around finisher around the basket. 59% 2P%
-Can attack opposing power forwards from the elbow or short corner with a quick first step
-Draws fouls in bunches thanks to activity level and quickness around the basket. 10 free throw attempts per-40 minutes
-Excellent rebounder on both ends of the floor
-Has the potential to defend multiple positions. Gets in the passing lanes frequently
-Just turned 17. Extremely young

Weaknesses:
-Body looks virtually the same as it did last year. Hasn't grown or filled out
-Still more of an inside player at 6-8, which raises some question marks about his tweener status
-Skill-level is fairly limited. Poor ball-handler in half-court court. Looks out of control whenever he needs to dribble more than once or twice
-Cannot shoot at all seemingly. 0/5 from beyond the arc. 61% FT%
-Size of hands and grip on basketball could make it difficult to develop his outside shot

Outlook: Young, athletic forward who was one of the most productive scorers at the NIJT at 26 points per-40 (5th best in competition). Too long, quick and aggresive for most European big men his age inside the paint at this level of competition. Missed a significant part of the year with a hand injury and hasn't done much to improve his body or skill-level from the perimeter. Will he continue to be as effective inside the arc as other players catch up physically?
Read full article

Outlook: Was just 15 years old at the NIJT Belgrade Tournament. Made a big splash in the very first game, scoring 25 points with 8 rebounds. Never came close to replicating that afterwards but showed some interesting flashes of talent and inspired a great deal of debate about what he might develop into over the next few years. Will he grow? What will his body look like down the road? Will he improve his skill-set and develop into a perimeter oriented prospect, or is he best suited as an interior player?
Read full article