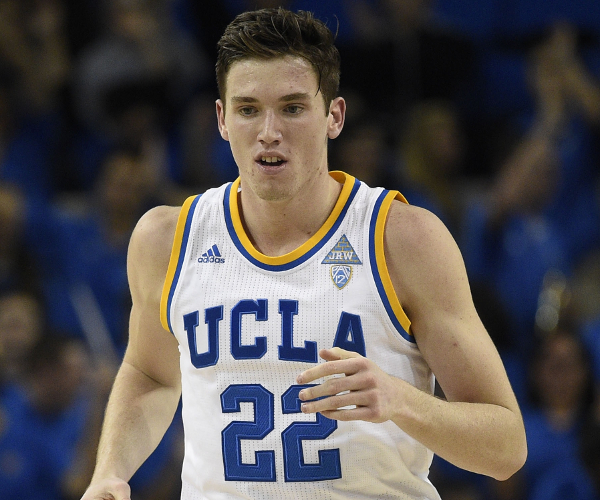 The 2016 #17 RSCI ranked recruit, T.J. Leaf arrived at UCLA looking to help turn around a program that had finished with just 15 wins and 17 losses the previous season. Prior to UCLA, Leaf had a decorated high school career at Foothills Christian High School outside San Diego, which culminated in an appearance in the 2016 McDonalds All-American game. He had originally committed to play at the University of Arizona, but decommitted not long after being cut by a Sean Miller coached USA Basketball squad, and after it became obvious that Lauri Markkanen was heading to the Wildcats. Leaf joined Lonzo Ball and Ike Anigbogu at UCLA to form one of the most talented freshmen classes in the NCAA, helping the Bruins to one of their most exciting seasons in recent memory, which ended at the hands of the Kentucky Wildcats in the Sweet 16.

Leaf was originally born in Tel Aviv, Israel, where his father Bradley Leaf had a successful professional career. T.J. came back to the United States at a young age but has since played with the Israeli National team, including an appearance at the 2015 FIBA U-18 Division B Championships, where he led the tournament in PER despite not making a single three-pointer in nine games.

Measuring at 6'10' and 225 pounds Leaf has excellent size at the power forward position. He is not the most physically imposing player and could benefit from some added strength which would help him in the rebounding, defense, and finishing departments. While Leaf lacks ideal strength and physicality on the interior, he moves fluidly for someone his size, and has the explosiveness and athleticism to run the floor and finish above the rim in space. He certainly benefited from playing in an up-tempo pace and space style alongside Lonzo Ball where he ranked in the 89th percentile in transition offense (per Synergy), but his ability to get up and down the court should translate well at the NBA level.

Leaf possesses a good deal of versatility on the offensive end of the floor, and he led a potent UCLA offense in scoring at 21.7 points per 40 minutes, and did so at an efficient rate, converting 64.4% of his 2-point field goal attempts, and 46.6% of his 3 point attempts.

Leaf can score in a variety of ways, both inside and out, and has unique perimeter skills for a player his size. He is a shifty ball handler who can grab and go off the defensive glass and ignite the fast break himself, or attack out of face up situations with slight changes of pace and direction. He is more of a finesse finisher around the basket who relies on touch, footwork, and his ability to finish with both hands. He struggles finishing in traffic, and often avoids contact around the rim as evidenced by his low free throw attempt rate of just 3.8 per-40. He has a developing back to the basket game, and showed patience operating out of the post and getting to soft jump hooks over either shoulder.

One of the more important aspects of Leaf's game is his potential to stretch the floor from the power forward position. He had the freedom to shoot 3's in early offensive situations in transition and in the half court, and converted nearly 50% of his attempts on a very small sample size of just 1.7 attempts per game.

NBA scouts will want to see get a better handle on how likely this part of his game is to translate to the deeper pro 3-point line, as Leaf has always been somewhat of a reluctant perimeter shooter, with 84% of his field goal attempts coming from 2-point range in 83 career games we have in our database, and just a 67% conversion rate on free throws on 229 attempts. His shot tends to be on the flat side, and he has some left to right movement on his release, but the impressive 3-point percentage he posted as a freshman was certainly encouraging. If he can consistently stretch the floor at the NBA level it will open several other offensive options for him as he showed the ability to attack closeouts with dribble pull ups and drives at the rim. If he can't, Leaf will have difficulties staying on the floor due to his limitations in other areas.

Perhaps an undervalued aspect of Leafs game is his passing ability. He is a willing passer with vision who averaged 3.2 assists per 40 minutes, and showed he can facilitate an offense from the high post or pass on the move. His court vision out of drive and kicks or his ability to read the defense out of short rolls in space are valued skills in the NBA and are hard to find among big men.

Leaf posted an impressive average of 11.0 rebounds per 40 minutes, with 3 of those coming by way of the offensive glass. He has excellent instincts crashing the offensive glass from the perimeter and uses his near 9-foot standing reach to go up and get rebounds in a crowd. Like the rest of his game, he is not the most physical rebounder and relies more on his athleticism and instincts crashing the glass, rather than boxing out on the interior with his narrow frame.

The biggest question marks about Leaf's game translating to the NBA level is where he fits in on the defensive end. He lacks ideal lateral quickness and strength, and doesn't have exceptional length (6'11 wingspan) to compensate. He struggles handling physicality on the block and had a difficult time defending the pick and roll in space, due to his inability to cover ground seamlessly. UCLA often opted to have him drop in pick and roll situations and he was inconsistent with his ability to contain ball handlers getting downhill at the rim. He did average 1.5 blocks per 40 minutes and is a capable rim protector when he uses his leaping ability and reach to go vertical at the rim, but he was often a step slow rotating off the ball and didn't affect a high percentage of shots at the basket. It is hard to say where he will be able impact the game on the defensive end at the next level given his inability to consistently handle bigger players on the interior, or quicker player on the perimeter.

Leaf arrived at UCLA as the 17th ranked player in his class, but after a tremendous individual and team season opted to enter the Draft and will likely end up going somewhere in the first round, possibly even in the mid-first area with strong workouts. His versatility on the offensive end should play well in NBA space, and if he can translate his perimeter shooting to NBA range and hold his own on the defensive end, he has the chance to have a productive NBA career.
Read full article

Jonathan Givony
@DraftExpress
Scouts will also be keeping a close eye on T.J. Leaf, who continues to be a lightning rod of a prospect, with no clear consensus from talent evaluators. Naysayers point to his shockingly poor splits, which indicate that he struggles mightily against quality competition, while putting up tremendous numbers against woefully overmatched opponents. Supporters are quick to bring up his game against Kentucky in December, where he had 17 points, 13 rebounds and 5 assists and was likely the catalyst behind UCLA's upset win in Lexington. While Kentucky is clearly weakest defensively at the power forward spot, something that has been their Achilles heel all season, this will still be an important game for Leaf to make the case that his lack of length and quickness won't rule him out from having a strong career at the NBA level, and that the tiny sample size of his 3-point shooting (less than one make per game) aren't a cause for concern.
Read full article

Jonathan Givony
@DraftExpress
Leaf is an interesting case study for NBA scouts, as his productivity has been fairly underwhelming in the games he's played against strong competition. His scoring, rebound, and offensive efficiency has been sky-high against weaker teams, but he's posting fairly pedestrian numbers against the better teams he's faced. This is a great game for him to show that thats just a statistical fluke, and that he can get his shot off, cover ground defensively, take care of the ball and make 3-pointers with his funky mechanics even against players like Gary Clark.
Read full article

Ryan Thomson
@rthomson9
Ryan Thomson takes a closer look at UCLA power forward T.J. Leaf's outstanding performance against then-undefeated Kentucky, to see what we can learn from an NBA perspective.

The ultra-productive freshman matched up with a variety of different types of players, leading to some very strong moments, as well as showing plenty of areas he still has to improve on, on both ends of the floor. He finished the game with 17 points, 13 rebounds, 5 assists and 2 turnovers in 32 minutes, shooting 7/12 from the floor.

Kentucky ended up losing this game on their home floor, giving up 97 points to UCLA, the most ever by a John Calipari coached team.

A horde of NBA scouts and executives were present in Lexington, as this was an ideal evaluation setting for talent evaluators to observe at least a half dozen future first round picks.

DraftExpress
@DraftExpress
T.J. Leaf scored efficiently, but didn't have a particularly good three days in Treviso. Lacking great length, strength, and toughness, Leaf struggled mightily at times defensively, especially on the block. Though he possesses a strong feel for the game, his unconventional looking shot was not falling consistently here, which hurt his ability to stretch the floor and limited the rest of his scoring arsenal. His best contributions came as a passer on the offensive end. Fairly efficient at every event he's attended at the high school level, this was a unique test for the Foothills Christian (CA) product.
Read full article