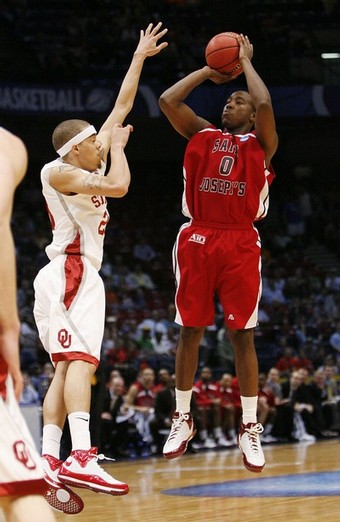 Joseph Treutlein
@DraftExpress
After a year of learning a new system and playing a different position, Tasheed Carr enters the 2008-09 season with the hope of taking his game to the next level. Carr played shooting guard his fist couple years at Iowa State before Phil Martelli transformed him into a point guard upon his arrival at St. Josephs. The transition was difficult at times, but Carr certainly showed his potential to be a force in the Atlantic 10 conference. With his athleticism and defensive capabilities, it will be interesting to see the difference a year makes.

Carr brings an attitude and personality that has been missing from the Hawks squad for quite some time. Hes very outspoken and the unquestionable vocal and emotional leader of the team. He actually has the words, Born Leader tattooed on his wrists, and his teammates will be the first to attest to that. In fact during the full season that he sat out because he was a transfer, he was named co-captain of the team  which says a lot about his character and the immediate impact he made.

Carr is also an exceptional athlete and shows off this athleticism on both ends of the court. On the offensive end, he is very good at pushing the ball down the court and leading fast breaks. With good size for a point guard at 6-4 and 211 lbs, he can pretty much get in the lane at will and uses his upper body strength to get tough shots off in traffic or kick the ball out to shooters.

In the half court, its a different story as hes been inconsistent and is too indecisive for someone trying to run an offense. Hes still adjusting to playing his new position, as hes more of a natural combo guard as opposed to being a pure point guard. He has a tendency to either over dribble or pick up his dribble too early, which is common during this positional transition. He turned the ball over on more than 1/4th of his possessions last season, which is an extremely high rate. After playing for a year, however, the mistakes that were tolerated last year will not be this season and he will be expected to be more fluid with the ball in his hands.

One aspect of his point guard skills that were impressive was his vision. He sees the court well and thats evident by his 5.6 assists a game, which was good for 2nd in the conference (32nd in the nation). He also had a 2 to 1 assist/turnover ratio, which is solid for a new point guard.

If Carr is ever going to be a serious draft prospect, he will need to improve his shot. He has a nice midrange game and can get his shot off with relative ease, as he has great elevation. His three point shooting however needs work. He only makes about one a game on three attempts (34.1%) and missed many wide open threes last season. He must become a more consistent outside shooter which will surely open up the rest of his game. He also needs to become a better free throw shooter (only 67.8%) as he has the ability to get to the charity stripe whenever he wants. Currently hes getting there about 3 times a game, which is a fairly average rate, and if he can increase his free throw productivity his stock will increase as well.

His strongest is probably his prowess on the defensive end. He has good lateral quickness and can be a nightmare for opposing guards with his long wingspan. He has a lot of energy on this side of the ball as his relentlessness is tough to contend with for 40 minutes. He is also very physical and benefits greatly from officiating crews who let things go. That physicality can back fire for Carr however, as he was whistled for a few fouls on jump shooters last season  a cardinal sin for any defender. He can show a little bit more discipline, but overall he is outstanding on this end. He also averages 1.6 steals a game, which was 6th in the conference.

Coach Martelli and the Hawk faithful will be looking for Carrs offensive game to come together this season. If he can become more comfortable at the point and expand his range, he will definitely cause havoc in the A10. His defensive and leadership qualities are his strong attributes and will help St. Joes make a run for another tournament bid.
Read full article

Kyle Nelson
@KNelsonDX
Tasheed Carr is an elite athlete and one of the best perimeter defenders in college basketball, but he has a long way to go before becoming a prospect at the point guard position. He is best when attacking the basket off of the dribble and either finishing or kicking the ball out and shows the best point guard instincts in these situations. He is extremely effective in transition as well. In half court sets, however, he has a long way to go before becoming a true point guard. He still shows the tendency to over dribble and on occasion, he picks up his dribble before he knows what he wants to do with the ball. He needs to work on tightening his handle, even though he is very quick with the ball as it is and he must find consistency in his shooting motion. This being said, Phil Martelli has had a lot of success in developing guards and considering the fact that 2 years ago at this time Carr was a Big 12 shooting guard, he still has a lot of potential to break out next season. Carrs leadership has been essential in order for the Hawks to make it this far and hopefully he will get a chance to showcase his improvements in front of a national audience during the post-season.
Read full article

Kyle Nelson
@KNelsonDX
Tasheed Carr again showed that he has a lot of potential and just as much work to do before becoming a legitimate prospect at the point. He is clearly the vocal leader in the Saint Josephs offense, but because they often play a three-guard lineup his role is somewhat undefined in terms of whether or not he is a pure point guard.

His distributing ability looked very good in the first half as he controlled the offense, most importantly feeding Ahmad Nivins in the post. He is quick with the ball in his hands and had been doing a good job of driving the lane and dishing out to a perimeter shooter. Today, however, he did not attack the basket and he was less effective as a point guard. While he looked very good in stretches, he still has a tendency to pick up his dribble too soon and over-dribble, a testament to his transition to the point guard position. Also, he must work on his dribbling because he is very fast with the ball in his hands as it is; with a better handle, he develop into one of the faster point guards in the NCAA.

Still, Carr is at his best on his defensive end. Today, he guarded three positions, taking turns on Drew Lavender and Stanley Burrell for most of the game. Their combined 6/16 shooting with 0/3 from beyond the arc is because of Carrs defense. He has very good lateral quickness and is capable of fighting through screens and traffic because of his superior strength. He excels as an on-ball defender because of his height, massive wingspan, and quickness and likely can stay in front of any perimeter player in college basketball. This wingspan also allows him to rebound the basketball, despite oftentimes not being anywhere near the basket. Alongside fellow guard Garrett Williamson, Carrs perimeter defense is going to give perimeter-oriented tournament teams nightmares.
Read full article

Kyle Nelson
@KNelsonDX
Two other Saint Josephs players of interest are transfer-junior Tasheed Carr. Carr, a 64, long-armed athlete, is in the midst of a mixed debut season at the point guard position. His size, athleticism, and defensive ability, however, make his modest strides somewhat more acceptable. He is still learning the position and at some points is out of control, passes ill-advisedly into the lane, or picks up his dribble too soon; his 7 assists and 4 first-half turnovers represent his growing pains. This being said, he is an aggressive slasher, who showed today the ability to create jump shots for himself and a much improved form once is ready to shoot. He shot 6/6 from the field in the first half His bread and butter, however, is his defensive ability where he is a stopper at this level. Utilizing his long arms and good lateral quickness, he is able to stay in front of his man and, just as he did to Drew Lavender last week against Xavier, he neutralized Fordhams guards into ineffectiveness.
Read full article