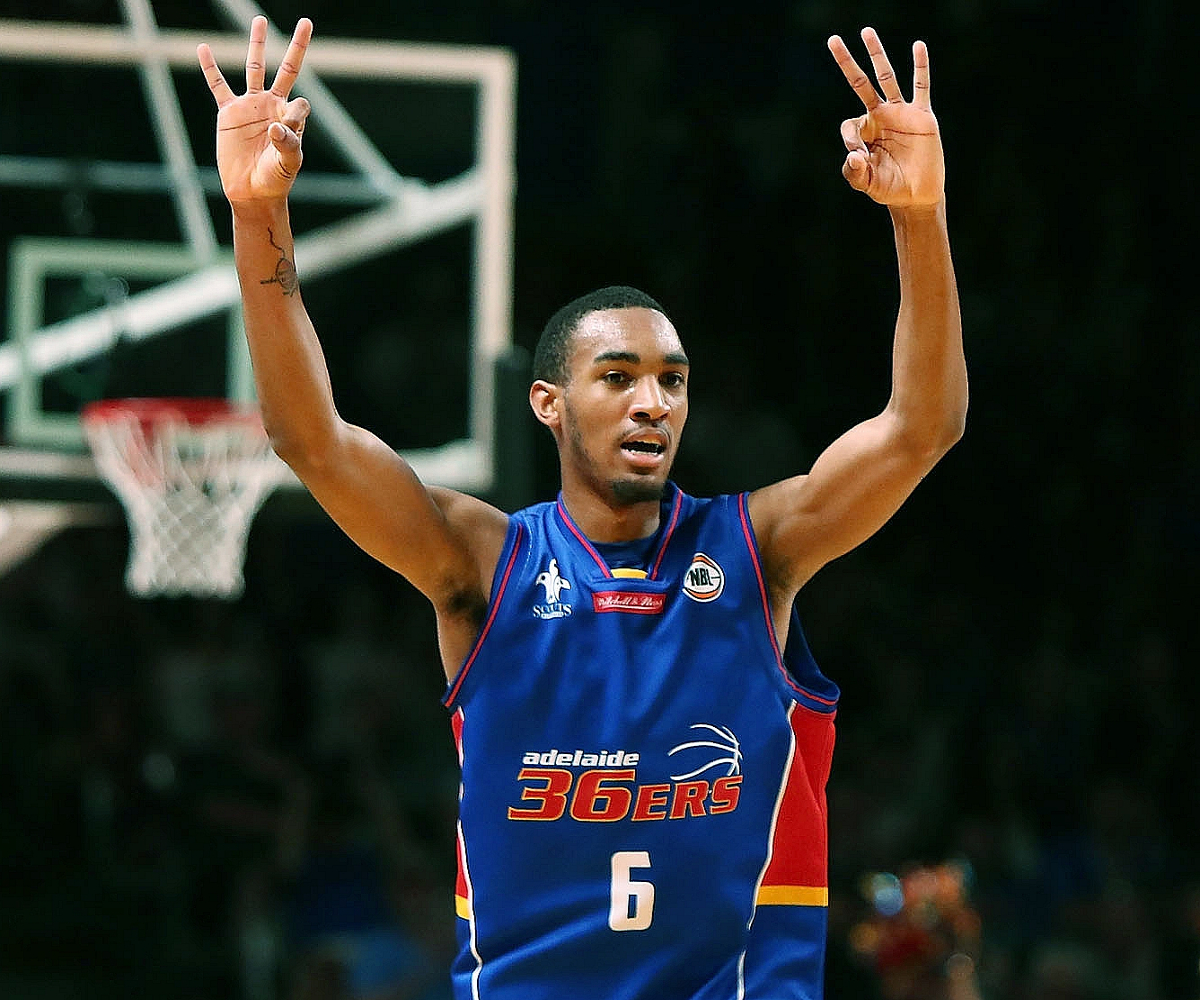 Terrance Ferguson made the unconventional decision to spurn college basketball and head to Australia, where he's been an import for the Adelaide 36ers. Nearly halfway through his 28 game regular season, we can start to draw some early impressions of how things have gone for Ferguson thus far.

On paper, Ferguson hasn't been an incredibly impactful player thus far, which was to be expected to some extent for those familiar with him. He's averaging 6.3 rebounds in 18 minutes per game, shooting 45% for 2, 39% for 3 and 58% from the free throw line, while generating very few assists, rebounds, steals, blocks or free throw attempts.

The film tells somewhat of a different story, though, as he's very clearly carved out an important role over the past six weeks or so. Now on a three game winning streak, Adelaide, at 6-6, is just a game and a half out of first place. Ferguson is even getting some crunch time minutes in highly competitive games, and the coaching staff clearly has a role for him that he's very much bought into. He seems to be gaining more of a comfort level as the season moves on, and could be in line for a much stronger finish if he doesn't hit the proverbial rookie wall.

Offensively, Ferguson is mostly a spot-up shooter, which has always been his strong point, and will almost certainly continue to be his role at the NBA level as well. What's impressive is how mature of a team player he's been so far, as he rarely tries to do things outside of his comfort zone, and has been a very willing ball-mover looking to make the extra pass.

Ferguson has had some occasional flashes demonstrating his explosiveness attacking defenders in a straight line, but is a very rudimentary ball-handler at this stage, even in the open floor due to his high and loose dribble. He looks a long ways off from being able to operate out of ball screens like most high-end NBA shooting guards can, looking uncomfortable handling pressure in the half-court. He doesn't have the skill-set or feel for the game to consistently use his athleticism the way you might hope, as indicated by his paltry free throw attempt rate (2.2 per-40 minutes), but most of his turnovers have come off trying to make unselfish plays for teammates, as opposed to forcing the issue looking for points.

Ferguson's jump-shot is the basis of his game, and that has translated fairly nicely so far, as evidenced by his 39% 3-point percentage. He elevates high off the ground, has a quick release point, is always on balance, and shoots it virtually the same every time, even with a hand in his face. He'll likely be able to make shots at a NBA level very early on in his career, especially from the corners, where he's extremely effective.

Defensively, Ferguson has been somewhat of a mixed bag, which is not particularly surprising considering he's an 18-year old going up against grown men. His narrow frame has been a hindrance in terms of being able to get over screens, wall off penetration, and avoid getting pushed around inside the paint, but to his credit, he's played with a high level of competitiveness, which has helped mitigate those issues to a certain extent.

He uses his length and quickness effectively to contest shots on the perimeter, will throw his body around in the paint at times, and is light on his feet with strong lateral quickness. He's gaining invaluable experience going up against professionals with a 24 second shot-clock, and has had some nice sparks showing the type of defender he can become as his frame continues to mature.

All in all, Ferguson has done a nice job of acclimating himself to the NBL, and it will be very interesting to track the final two months of his season. He's obviously built a nice rapport so far with his teammates and coaching staff, which has clearly made his transition far smoother. Ferguson's ready-made role as a 3'n'D wing has helped ease his adjustment to Australia and makes it easy to envision how a team can integrate him at the NBA level as well. He hasn't shown much at this stage to indicate he can be much more than that, which may put somewhat of a ceiling on his overall upside, and how high he could be drafted, but there is a huge need for players in his mold in today's basketball, which bodes well in his favor heading into June.

You can follow Ferguson's season on the NBL's official website, or on NBL TV, where his games are streamed in high quality for just $5 per month.
Read full article

Mike Schmitz
@Mike_Schmitz
Fresh off of the announcement that he will not attend Arizona next season, but rather go pro and play in Australia for the Adelaide 36ers, Ferguson had a good, not great, showing at Stephen Curry Camp.

From a physical standpoint, Ferguson looked a bit more developed, which is important given the fact that his likely NBA role is as a 3 and D style wing. In terms of on court skills, Ferguson hasn't added all that much to his game as perimeter defense, catch and shoot threes and opportunistic scores in transition are still his bread and butter.

Ferguson, who is a 39.4% 3-point shooter based on 259 attempts in our DraftExpress database, proved that he can be a bit streaky as a shooter. He can certainly get hot in a hurry as he catches on the hop, elevates and gets it off quickly without a lot of moving parts to his mechanics. But with that said, Ferguson has a bad habit of alligator-arming his release and not getting maximum rotation on the ball. Even with some inconsistency, Ferguson still has the stroke to be a high-level shooter with more and more repetitions.

The 6' 7 Dallas native does has a long way to go as a shot creator as he's limited to mostly straight line drives. A tremendous athlete in transition, Ferguson isn't able to use that explosiveness in the half court, because the ball slows him down at times, evident by his 46.1% career 2-point percentage. He did show some signs operating from the mid-post and pulling up in mid-range spots after one or two dribbles, but becoming more sound with the ball will be the key to Ferguson's overall scoring upside.

Defensively, Ferguson still has the tools and quickness to be elite, and given the shortage of size, length, athleticism and shot making ability on the wing in today's NBA, there's certainly a need for a guy like him. It will be interesting to see what role Ferguson will play for the 36ers and how much he'll be able to progress with his skill-level in Australia.
Read full article 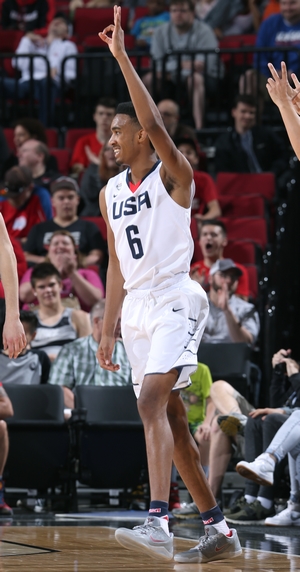 Strengths
-Good size for a wing at 6' 7. Decent length  6' 9.5 wingspan.
-Big-time leaper in transition. Best off of one foot.
-Can really get going from the perimeter with his feet set. Excellent when he's able to step into it in transition. Catches on the hop. Gets his feet set quickly. Nice elevation. Can run off of screens a little bit. Solid rotation and wrist action.
-Can make a one-dribble pull up.
-Capable of attacking a closeout.
-Outstanding feet on defense. Tremendous on ball defender when he digs in. Does a great job keeping the ball contained. Has the size and length to recover and contest.

Weaknesses
-Doesn't have a great frame  186 lbs.
-Super bouncy but doesn't quite know how to use his athleticism in the half court. Very rigid ball handler. Offensive game is a little vanilla. Right-hand dominant.
-Can improve his ability to get to his jump shot vs a set defense.
-Dangerous when he gets going but can be very streaky as a shooter.
-Not much of a playmaker.
-Has some lapses as an off ball defender.

Outlook Ferguson had an up and down week of practices before exploding in the game for 21 points on seven threes. He plays with a lot of confidence and proved how he can change a game when he gets going from three. There's not a whole lot to Ferguson's game but with his size, shot-making ability, and on-ball defense, there's most certainly a role for him at the NBA level in time.
Read full article

Terrance Ferguson's measurements line up well with those we've seen in the past. He has terrific height for a two-guard at any level, but lacks a degree of length and bulk. As a result, he doesn't have too many ideal comparisons among previous NBA draft picks, with the closest match being Gerald Green who measured 6'7.25 in shoes with a 192-pound frame and a 6'9.75 wingspan at the 2005 NBA Pre-Draft Camp.
Read full article

Strengths:
-6-7 in shoes
-Incredibly explosive leaper. Elevates high above the rim in warmups with amazing ease
-Very good potential as an outside shooter. Makes catch and shoot jumpers regularly. Very confident in it (six attempts per game in just 22 minutes at the U19s)
-Can come off screens. Creates separation well thanks to tremendous athleticism
-Competitive defensively
-Only turned 17 a few months ago. Over two years younger than many of the players in attendance

Weaknesses:
-Only 183 pounds. Frame is somewhat frail, especially in the lower body, and will take time to fill out.
-Wingspan is average, measured between 6-8 and 6-9.
-Poor ball-handler. Struggles to create his own shot off the dribble in the half-court. Rarely gets to free throw line
-Shooting mechanics are not consistent. Sometimes shoots with a very low release. Often off-balance. Tends to jump too high and shoot on the way down
-Doesn't have any real in-between game. Shooting 3s in the half-court and running the floor in transition are his two main sources of production
-Awareness, feel for the game still a work in progress

Outlook: Freakishly athletic shooting guard with great size and good potential as an outside shooter. Draws comparisons to the likes of Jeremy Lamb and Gerald Green, but seems to have better competitiveness and overall potential defensively. Didn't have an amazing showing (7.9 PER), but still held his own in Crete despite being one of the youngest players in attendance.
Read full article