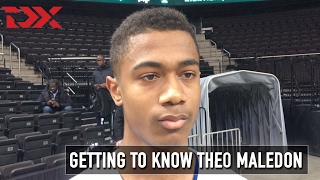 Strengths
-Nice size and frame for a point guard prospect, especially considering he's still 15 years old. 6' 3 with a 6' 7.5 wingspan.
-Smooth athlete. Not freaky but fluid and coordinated.
-Taking on a fairly big role as the lead guard of CFBB at a young age, speaking to the level of confidence they have in him.
-Shows quite a bit of potential as a perimeter shooter. Needs time and space but shoots a soft ball with great rotation  37.5% from three in Kaunas (16 attempts). Will turn into a weapon for him in time.
-Soft touch on floaters, some of the off foot variety.
-Has vision when he's playing with confidence. Can move it ahead in transition. Good in drive and dish situations. Has some pick and roll feel  can hit the weakside shooter circling up. 7.7 assists per 40 minutes.
-Plus defender when he digs in. Good feet, can sit down in a stance, long arms disrupt his opponent. Has quite a bit of potential on that end due to his tools.
-Comes from a basketball family. Has been playing since age three with both of his parents and all siblings playing. INSEP seems very invested in his development.

Weaknesses
-Smooth, not freaky athlete. Plays mostly below the rim in traffic. Doesn't get to the free throw line at a high rate.
-Really struggles to lead. Self-proclaimed shy kid who's making an effort to be more of a floor general. Total confidence player. Tends to get down on himself easily. When things go badly they snowball at times.
-Very careless turnovers. Doesn't have a ton of poise versus pressure. Makes a lot of head-scratching passes when he's sped up  4.3 turnovers per 40 minutes. Needs to do a better job taking care of the ball.
-Not a very dynamic shooter. Best in spots with time and space. Not going to rise up off the bounce. Mechanics break down a bit when heavily contested.
-Can improve his handle  not going to change speeds or directions with force, especially against players two years older than him. Plays at mostly one speed right now.
-Defensive effort comes and goes. Can be too upright in his stance. Nov overly physical or scrappy on that end.

Outlook
Maledon's combination of versatility and tools make him an NBA prospect at a fairly young age. He's not quite great in one area but can be molded a lot of different ways because he can shoot, has some vision, and has positional size and length. What will go a long way in determining Maledon's long-term potential is how he evolves mentally  if he can become a next play type of guy and whether or not he can lead on the floor despite his naturally quiet disposition. Maledon's awareness of his weaknesses is quite refreshing for his age, and it will be interesting to see how he grows from a personality standpoint as he goes from being one of the youngest guys on this INSEP team to one of the oldest, and eventually continues his career in Pro A France.

Strengths
-Excellent physical profile for a lead guard prospect at 6' 3 (likely still growing) with a great frame, a 6' 7.5 wingspan and above average explosiveness
-Plays a little bit bigger than he is. Covers ground with his dribble. Long strides. Not a great finisher or overly polished ball handler, but can get into the paint off the bounce. Uses hang dribbles. Can play out of ball screens.
-Capable spot shooter  41.4% from three. Crouches down and doesn't have the quickest release but the ball comes out really smoothly. Good wrist action, crisp rotation and soft touch.
-Takes pride in stopping his man. Very good defensive potential given his tools and foot speed. 3.5 steals per 40 minutes.
-Has some passing instincts although he has a ways to go before developing into a full time point guard
-Youngest player on the team by almost six months and was still able to have a fairly major role. Doesn't seem to be very afraid of the moment. Wants the ball in his hands late in games.

Weaknesses
-More combo than point guard right now. Really struggles to handle it and make decisions versus pressure. 3.9 assists and 4.4 turnovers per 40. Should improve with added experience. Very quiet on the floor.
-Has quite a bit to add to his pick and roll game, especially as a facilitator
-A bit raw as a ball handler. Likes to use straight line hang dribbles but doesn't have much change of direction.
-Can improve his off hand around the rim and add more of a floater. A bit out of control going to the rim at times. 33.3% from two.
-Streaky shooter who isn't all that dynamic of a shot maker given the nature of his mechanics. Lacks the ability to create space to get to his jumper off of the dribble.
-Gets lost off the ball on defense at times. Still very young.

Outlook
The 2001-born INSEP product didn't put together a super consistently productive tournament but he showed more than enough flashes to gain notoriety from scouts and media members alike as one of the better long-term guard prospects in attendance. Although he still has almost three years until he turns 18, Maledon has placed himself on the radar among the top prospects in the 2001 class.
Read full article