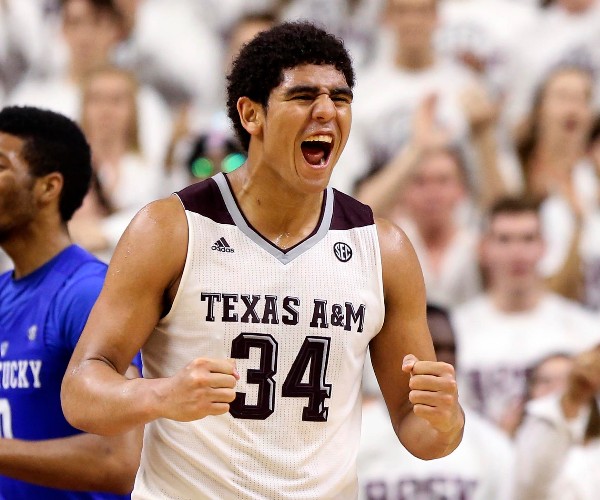 Tyler Davis wasn't interested in Texas A&M early on in his recruiting process, but the 27th ranked RSCI recruit became part of an impressive freshman class that was critical in helping the team advance to the Sweet Sixteen. Davis was inserted into the starting lineup from day one, and was named to the SEC All-Freshman team after averaging 11.3 points and 6.3 rebounds per game. He'll now be looking to build on this performance as a sophomore. 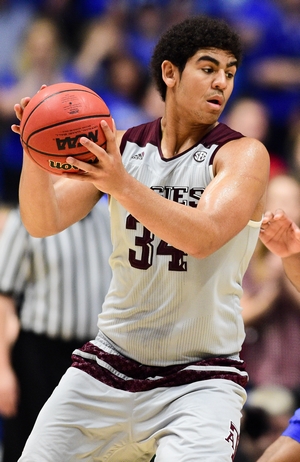 Davis is listed at 6'10, 265 pounds and doesn't have a high level of athleticism, but is an aggressive and tough-minded back to the basket center. He does need to improve his conditioning, as he seemed winded after short stretches which left him less effective and foul prone, limiting him to just 22 minutes per game. He possesses just average speed and explosiveness and getting in better shape could help him become a more dynamic athlete and keep him on the floor for longer stretches. Davis showed a good work rate in the minutes he did play, running hard in transition to get some easy buckets while being active in the half-court offensively.

He is strong around the rim and has displayed some deft touch on his way to finishing an excellent 65.5% of his two point field goal attempts. He has shown several ways to score with his back to the basket by using his strength to seal his man as well as some nice footwork on a drop step or spin move for a layup. He is extremely right hand dominant and will need to work on becoming a better finisher with his left hand to be able to score against length from all areas of the paint.

Davis is a workhorse on the offensive glass, pulling down 5.2 offensive rebounds per 40 minutes last season. He uses his strength to get to loose balls but he can struggle to finish on putbacks and will need to be able to rely on his left hand to finish in a crowd to be more efficient on these second possessions. Even when he can't finish in traffic, he is able to help his team by getting to the free throw line. His frame can handle contact and he doesn't shy away from physical play as he attempted 8.2 free throw attempts per 40 minutes last season.

A capable scorer around the rim, Davis is a little limited in his offensive production outside of baseline cuts to the basket or post-ups. He struggles to be effective out of ball screens and although he sets solid screens to free his teammate, he doesn't have the foot speed to be first to the rim on his rolls out of the screen. He took only eight jump shots according to Synergy Sports Technology and looked uncomfortable shooting from the mid-range which is evident from his poor mechanics from the foul line where he converted only 62.5% of his free throw attempts.

NBA teams will likely want to see him become a little more well-rounded as old school back to the basket centers in his mold aren't always viewed as being the best fit in modern NBA offenses.

Defensively, Davis struggled to provide the same level of engagement he did offensively and teams were able to score relatively easily against him. He didn't engage his man early on the block and let himself get backed under the rim far too easily for a player of his size. He also wasn't able to effectively guard ball screens with his below average agility, as he was beaten either by the ball handler off the dribble or by his man, being a step slow to recover.

He did block two shots per 40 minutes but doesn't project to be a big-time rim protector full time. Although he has good timing and instincts to block shots on his opponent, he doesn't show the best quickness or explosiveness rotating over on drives and protecting the rim from the weakside.

Davis was only able to average 5.8 defensive rebounds per 40 minutes, a below average mark for a center. He did put a body on his opponent, but didn't always fully engage to carve out rebounding position, which caused him to concede offensive rebounds when he was second off the ground. Defensive rebounding will be key to his role and he will need to work harder at boxing out and at least keeping his man away from offensive rebounds to help his team rebound if he can't be the first to every missed shot.

Davis has displayed a high level of skill around the basket and NBA teams will be monitoring him closely throughout his career to see how his frame matures and his athleticism evolves. If he can find more ways to help his team offensively while improving his agility to make more of an impact defensively, he will begin to build a stronger profile as a NBA prospect.
Read full article