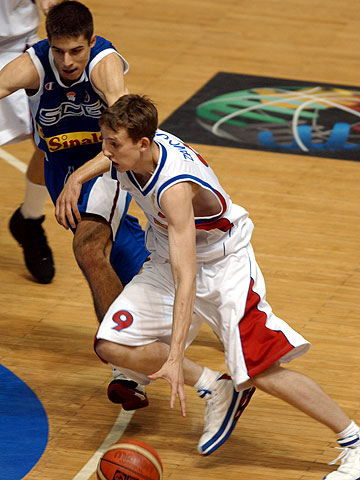 Luis Fernández
@DraftExpress
Inconsistency keeps dominating the play of this promising (international basketball wise) shooting guard. His perimeter stroke looked better that it did in Treviso, but thats not saying much; in the end, hes struggling too much for a guy who is advertised as a shooter. Actually, he himself is trying to fill that label by sticking primarily to his perimeter shooting, but this way hes probably going to end up as a pure specialist.
Read full article

Luis Fernández
@DraftExpress
Hes Vasily Zavoruev, and at this camp, hes been cursed. However, the player himself has told us that he was coming off several days of physical conditioning with the U-20 Russian National Team, so his legs are completely dead (the shot always starts in the legs). At least, hes being smart enough to look for other options in slashing moves. Still, every year we see more clearly that he has little NBA potential, considering his relatively poor physical set. He is skinny, a bit undersized for shooting guard, and not that athletic to make up for it. Regardless, the fact remains that he should become a very nice player for Europe.
Read full article

The European Junior (U-18) Championships: The Shooting Guards

Luis Fernández
@DraftExpress
Earlier in the year, we reported from LHospitalet about a certain feeling of disappointment with the evolution of Zavoruevs game, that hadnt developed as much as others, such as teammates like Yaroslav Korolev or Maxim Sheleketo, while raising doubts about how he would fare against superior competition. Well, although still a junior, this was actually superior competition for him, and sharing the leader spot in Russia with Korolev, Vasily was one of the best scorers of the tournament (fourth overall) and surely a bright presence on court.

Arguably the best shooter in Belgrade, no player featured such a magnificent stroke from anywhere on court, while still remaining consistent gunning off the dribble. Indeed, he perhaps abused his jumper at times (he tried more treys than two-point shots), but who could blame him? His accuracy speaks for itself: 60% in two pointers, 40.7% in three-pointers. If he decides to shoot, its not easy to stop him, as he enjoys a fairly quick and high release of the ball, also with NBA range. He doesnt feel intimidated having a rival close to him, just proceeding with his good mechanics. His poor free-throw percentages are highly surprising, though. You would expect that this kind of player would be automatic from the line.

Zavoruev is also effective putting the ball on the floor to penetrate. He has a nice first step and good footwork to drive in traffic. However, I still think he may suffer trying to finish this slashing plays against top competition, given his size and less than stellar athleticism, although he knows how to dish the ball to an open mate, as well as stop mid-way towards the basket to release a mid-range jump-shot. All in all, I think there are good chances that he becomes more of a shooting specialist once he starts playing against men.

On defense, hes rather quick in the lateral movement department, so he doesnt have too many problems at this level.

Zavoruev is bound to become a very good player in Europe, and very few people have any doubt about that. However, I still dont see his NBA future crystal clear. Hes slightly undersized and not a freak athlete. He looks like the kind of player than will need to prove his value in Europe before getting great consideration from the American League.
Read full article

The Reebok Eurocamp in Treviso

Pooh Jeter
@DraftExpress
We'll start with a guy who is at this point a little more than just a promising kid. A member of the junior level juggernaut CSKA Moscow, who were European champions many times over, he even had a little experience with the senior team this past season. We included him on this list because this guy really has all the tools to become really a special player. Since last year, he dramatically improved in every facet of the game, especially since he's playing much more under control. He struggled sometimes with his outside shot, but he has the right mechanics and was hitting it regularly in practice. He has great handles with both hands and is explosive enough to be a threat off the dribble to drive to the basket, going left or right, knowing how to use screens in the process. He can slash inside finishing with both hands, find the open man or stop and pull up for the midrange jumpshot. He even played some point guard with decent results, showing what kind of a complete game he has at such a young age. What's more impressive is that he didn't look like one of the youngest players at this camp. He is already a star at this level, something you can't say of the other guys in this list.
Read full article

Luis Fernández
@DraftExpress
If there was a clear cut favourite for the MVP trophy before the tournament started, that was Vasily Zavoruev, who was coming off a 15 point performance with the CSKA first team in the Russian Superleague. And while he played well, he left a certain feeling of disappointment.

He seemed more limited potential-wise than he looked last summer in Zaragoza, and his game has hardly improved. Not what I expected from a guy who is enjoying some action (as little as it may be) this season with one of the three best teams in the world outside of the NBA. But he's still a 6-5 shooting guard without standout athleticism to make up for it.

Zavoruev is a scoring type of shooting guard. He's as good of a shooter as always, and while he successfully used penetrations to produce, it doesn't look like he will be able to translate his slashing abilities to the pro level with enough consistency to keep his effectiveness. Besides his size and athleticism, his dribbling hasn't evolved a bit, being just about average for a shooting guard. Nor is his passing ability off-the-charts when dishing to his teammates in those situations.

So I think Zavoruev will make a good living in Europe, but hardly anything else.
Read full article

Luis Fernández
@DraftExpress
Zavoruev is one player with a clear scoring instinct. His perimeter shooting is his main weapon right now. He averaged nearly 7.0 three-point attempts per game. That was perhaps a few too many, for he was not always open. His mechanics are excellent, though, whether shooting statically, off the dribble, or catching and shooting off a screen.

But Zavoruev can do more things. He is a fairly quick player who flashes good ball-handling skills, giving him the possibility of penetrating the defense. In those situations he can dish off to his teammates quite well. Also, he knows how to move without the ball.

Being just 6'5 is not as asset. He is rather athletic, but not a freak of nature. He's another 1987 guy and so was facing older competition in Zaragoza. There is room for growth, though, and Zavoruev is a talented kid.
Read full article