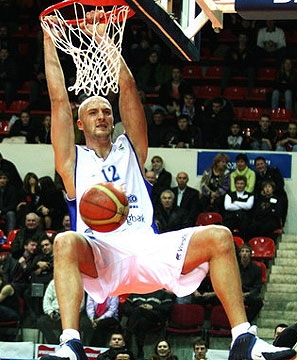 An American Perspective on Europe: The Big Men (Part One)

Jonathan Givony
@DraftExpress
Whether he is a great NBA prospect is certainly a matter of debate, but no one can deny the fact that Veremeenko is definitely an excellent basketball player. His skill level is extremely high and his talent is evident in the intelligence he shows in putting the ball in the hoop. He is a very good ball-handler and has a nice first step, which he uses consistently to create mismatches out on the perimeter and blow by his man. Veremeenko gets to the free throw line at an excellent rate, which comes from a combination of attacking the basket off the dribble and using his size inside to his advantage, mainly in the form of pivot moves and turnaround jumpers. Veremeenko is more of a mid-range shooter than a 3-point shooter, possessing a very quick, but low release reminiscent to a certain extent of Shawn Marion. He moves off the ball well, passes unselfishly and generally understands how to maximize himself as a bit of a freelancer offensively.

Veremeenko might not be quite the 6-10 hes listed at, and he lacks a bit of length on top of that. His athleticism is good, but certainly not great, and there are some concerns about how exactly his game translates over to the NBA, along with how much hell continue to improve in the future. In Europe he is a mismatch with his ability to take players outside and also do damage in the mid-high post, but in the NBA he might not quite be big or quick enough to translate those same skills to consistent scoring. There are concerns about his unorthodox shooting mechanics, which hampers him from getting a consistent release point on his shot, and is evident in his unimpressive production from behind the FIBA arc. Defensively, he lacks the lateral quickness to stay in front of most players, getting by mostly on his smarts rather than on his physical attributes.

With the small-ball direction that many teams are headed in, Veremeenko could find himself a spot as a face the basket power forward in the NBA down the road. He will have to improve his accuracy from behind the NBA 3-point line, though, as well as become a more capable man to man defender. He is a prime candidate to draft somewhere in the 2nd round and stash overseas for a few more years, hoping he develops a go-to skill that an NBA team can rely on when they bring him off the bench. Right now there isnt quite one thing for him to hang his hat on.
Read full article

Strengths
The arrival of Dirk Nowitzki to the NBA has brought an increasing demand and expectation for similar shooting ability from any European big man who has followed him since. And while this pattern is frequently false, as good of a stroke of many of those guys might have, in the case of Vladimir Veremeenko we're talking about a true sniper. The Russian enjoys one of the quickest releases amongst forwards you will find anywhere; it's automatic and very reliable from mid-range distances. He can make it off the dribble, while squaring himself for a balanced shot, and almost never in a wild fashion.

Fortunately, Veremeenko is not just a one-dimensional player. Standing 6-11, he takes advantage of his great mobility and coordination from the power forward position.

He runs the court very well, and enjoys a very good first step and nice handles that allow him to penetrate, giving him the ability to punish his defender with his superior quickness. He can also produce from the low post, although he usually looks for a turnaround jumper in those situations.

Veremeenko understands the game pretty well. You can feel it while watching him pass the ball, quickly and to the right place, or just by observing his efficient movement without the ball while looking for room to operate.

He's quite a nice team defender, careful with rotations and sometimes even energetic while trying to come up with a block from the weak side, showing a nice vertical leap and good timing. He has good lateral quickness for the power forward spot as well.


Weaknesses
Despite the various small forward characteristics that Veremeenko enjoys, there's little doubt he will end up playing as a power forward considering his size. Otherwise, he would probably suffer too much on defense as his lateral quickness is not quite good enough to contain wing players.

So this leads us to another defensive concern: right now, Vladimir is still a bit skinny to defend the low post. He usually gets banged down there in Europe, and while he can perfectly live with it on this side of the ocean, the amplified version of this problem stemming from the constant physicality that he would face in the NBA on a nightly basis might turn him into a defensive liability. Besides, he's not really overly aggressive as it is. Although we should consider that there's no real reason to believe that he won't be able to add enough weight to make a living at the power forward spot.

Not everything is perfect regarding his shooting. Considering the type of player he is, he would really benefit from being the three-point threat that he would represent in the NBA, but right now he isn't that consistent enough in Europe from that area. He should try to improve his range as much as possible. He could also try to improve his post game and finishing skills there, because he will need them in the NBA.

Something that leaves a bit to be desired is the degree of fearlessness he displays when taking the ball to the basket, as he doesn't always gets the job done with traffic in the paint. In general, he doesn't look like a hot-blooded player, not showing too much emotion, and not looking overly intense.

Veremeenko looks quite mature. Strength aside, it doesn't seem like there's too much room for him to grow as a basketball player; he likely won't become significantly better than he is right now (which isn't all that bad).


Competition
At the age of 15, Veremeenko was already playing in European competition in the Korac Cup with his hometown team Spartak Gomel. In 2001, he made the all-Belarusian league first team. For the 2002/03 season, he moved to Russia to play for Avtodor Saratov, averaging 11.3 points and 6 rebounds in the SuperLeague. The following season he raised his stats to 14.2 points, 7 rebounds and 2.1 assists.

Veremeenko saw himself moved to Dynamo St. Petersburg after this new team bought Avtodor's place in the SuperLegue in 2004, afterwards building one of the most competitive rosters in Russia. But Veremeenko hasn't slowed down while playing for a much better team. In the Russian SuperLeague he's currently averaging 14 points, 7.4 rebounds and 2.1 assists, while having 13.7 points, 5.8 rebounds and 2.4 assists in his team's so far undefeated run at the FIBA Europe League.

Veremeenko has played on all the different Belarusian youth national teams. His most impressive stat line came in 2003 from the qualifying round of the U20 European Championships, when he averaged 28 points and 13 rebounds. In 2001 he was already playing for the senior National Team.


Outlook
There's a good chance that Veremeenko will declare for the 2005 draft. A 6-11 player with his skills shouldn't have a problem being selected in the late first round, or in the early second as the worst case. He could wait another year, especially if he doesn't get a first-round guarantee, but considering his maturity, it doesn't look like he could significantly improve his stock in the meantime.

Pooh Jeter
@DraftExpress
Veremeenko is a small forward, listed at 6-11, but didn't look any taller then the 6-10 Danny Ferry if he's even that tall. He's a good shooter, with a very quick release, and was incredibly precise from the corner. In the 1 on 1 drills he was not as good as he should have been against the slower big man. Good handles, he played the point very well. Good quickness and athleticism for a guy his size. Hard to tell too much about his defense, but he will probably struggle against NBA SF's because of his height. Doesn't have great post moves, likes to fadeaway mostly, and has problems finishing around the basket. Lots of talent, a guy to look out for next year's draft.
Read full article