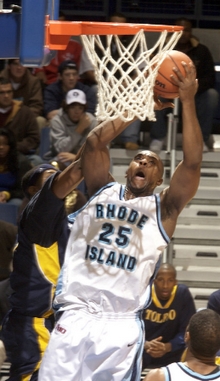 Kyle Nelson
@KNelsonDX
Will Daniels attempted to prove that he was capable of being a perimeter player, but ultimately proved how much the tweener label really fits. Beginning the game almost solely on the perimeter, Daniels showcased his hitched perimeter jumpshot and as seen in the 1/4 he shot from beyond the arc, it did not go well. He was able to draw fouls on his dribble drives, but also showed his average first step in the process. While attempting to play defense on Charlottes inside-outside big men, he got himself into foul trouble, ultimately fouling out in 25 minutes after scoring 15 points, grabbing 5 rebounds, and committing 4 turnovers. His body language was also very poor throughout the game and he seemed to get more frustrated as his offensive performance continued to stagnate; at one point, he did not even attempt to rebound his teammates miss on a free throw attempt. Daniels did little to address the tweener label associated with his name; if anything, he showed how much work he has to do before considered a legitimate draft prospect. Losing some baby fat might be the first step as well as working on becoming quicker and more agile. For Daniels, however, this performance was very damaging to his already waning draft stock.
Read full article

Joey Whelan
@DraftExpress
Will Daniels has had a fantastic first third of the season leading the Rhode Island Rams to one of their best starts in years, and a national ranking. Listed at 68, but probably closer to 67 and 225 pounds, Daniels has a solid frame and has been a beast against smaller defenders on the block, while also taking advantage of mismatches on the perimeter. The seniors numbers have improved each year, and he is on pace right now for his finest season at URI.

There is no question that Daniels is somewhat pigeon holed into the undersized power forward role because of his size and athletic limitations. Daniels is very strong, which helps him especially on the boards and when posting up offensively. He is hurt though by his lack of overall explosiveness and quickness. Often times at the college level Daniels finds himself in matchups against slower post players that he is able to beat off the dribble. Against more athletic players, though, he has a tendency to struggle, especially on the block where he cant elevate over defenders very well.

The classic college tweener, Daniels will float inside and outside on offense depending on what the defense gives him. He seems to have no problem taking shots from both the perimeter and off the dribble against slower defenders, but he shoots a low percentage due to his poor mechanics. Daniels cocks the ball well behind his head when he shoots, and also has a tendency to jump and release the ball from inconsistent vantage points. So while he isnt afraid to take these types of shots, it isnt hard to see why he is shooting below 30% from beyond the arc on the season. In cases where smaller, quicker players are guarding him, Daniels becomes much more of a catch and shoot player, spotting up on the wing, rather than creating his own shot.

Daniels has shown that he will take advantage of mismatches on the perimeter and drive to the basket from time to time. His ball-handling skills are average, so generally he is limited to driving in a straight line to the basket. Despite his physical toughness, Daniels has trouble finishing in traffic around the basket, and a lot of this stems again from his inability to elevate over a crowd.

The post is where Daniels is at his best. He has a nicely developed post game, relying primarily on a solid drop step and nice spin move to the baseline. From standstill positions, he often needs to use a series of pump fakes to get his man in the air, rather than just exploding at the basket and finishing strong. Daniels is very tough inside, playing physical basketball and hitting the offensive glass hard. His nearly three offensive rebounds per game is a testament to his tenacity on the inside.

The defensive side of the ball is where Daniels is going to lose points with NBA scouts. His lateral quickness isnt great, and while he may be able to guard post players that will step out on the wing, he isnt fast enough to keep up with most backcourt players. In the post Daniels plays tough defense, but taller and more athletic players can back him down and elevate over him. He picks up over a block a game, though, thanks to his good timing and anticipation skills. Shedding 10-15 pounds would probably serve him well, as he's carrying some extra baby fat around that he doesn't quite need.

Considering his toughness, basketball IQ and ability to produce despite his physical limitations, some may project Daniels winding up in a Udonis Haslem type role in the NBA. He will most likely get an invite to Portsmouth at the end of the season, but will probably have an uphill battle to hear his name called on draft day.
Read full article