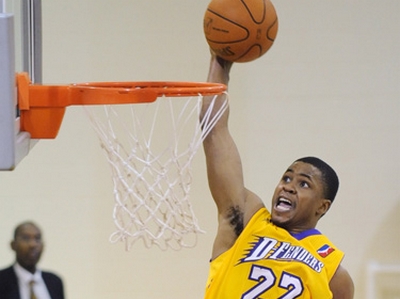 Richard Walker
@DraftExpress
Friday night the NBA D-League held it's Slam Dunk Competition and DraftExpress was there filming every dunk with our exclusive slow-motion technology, lovingly dubbed DX-Mo. The players would be hard pressed to put on a better show than last year when James White went on a high flying, long jumping, dunking clinic, but these players gave it their best and provided some memorable moments.

Los Angeles Dar Tucker showed basketball fans that he, not the Lakers Shannon Brown, is the best dunker in the city of Angels. For his final dunk, Tucker leapt over 6'11" Brian Butch before throwing it down.

Gee was concise in his praise of Tucker, He jumped high. And then added, I had a lot of fun and Im glad I did it.

Albuquerque's Tony Danridge started off the competition with a nice baseline dunk where he switched hands mid-flight and threw it down left-handed. It was a good conservative choice for a first dunk, but Danridge missed on his next turn and failed to advance to the finals.


Austin's Alonzo Gee was up next and went with a windmill.

For his second dunk of the first round, Gee does a double clutch, 180 reverse jam.

Tucker was up next and started with the big pass to himself from the three-point line and finished with a two-handed windmill.

For his second dunk of the first round, Tucker again started with a pass from the three-point line and then went between his legs before flushing it home for one of the best dunks of the night.

Maines Trey Gilder was the last contestant to dunk in the first round and began by placing two ball boys in front on the rim. He didnt quite clear them, but the dunk went down.

Gilder followed that dunk up with a reverse slam off of a lob pass to himself from the three-point line.

Gee and Tucker advanced to the final round with Gee going first. Gee started off with a powerful reverse 180 windmill dunk.

Dar Tucker countered Gees dunk with a lob from the three-point line and finished it with a two-handed reverse jam bring the ball down low towards his knees first.

For Gees final dunk, he went out to the three-point line, threw the lob to himself and stalled in midair as he caught it before throwing down a powerful jam.

Tucker finished the night off by jumping over 611 Brian Butch of the Bakersfield Jam scoring 50 points in every one of his dunks for a perfect four dunk total of 200.

With nine former NBA players on the rosters, the MVP of the NBA D-League All-Star game went to Bakersfields Brian Butch. Butch, who was just named as a replacement player last week, scored 18 points and grabbed a game-high 13 rebounds in leading the West to a 98-81 victory.

There are so many great players. I just came out here and tried to perform and do what I can do. Im just thankful for the D-League to give me the opportunity, said Butch.

The Wests bench outscored the Easts bench 54-20 and held a 55-40 advantage on the glass. Los Angeles Diamon Simpson, who like Butch was a replacement player, connected on 7-of-8 shots and was the second leading scorer for the West.

I didnt have any expectations. I tried to be as relaxed as I could and just perform, said Simpson. It was fun being around all this good talent. Its definitely an experience I will remember.

The East squad jumped out to an early 17-4 lead and it looked like the rout was on. However, the West squad shortly responded with a 23-4 run of its own and carried a seven point lead into halftime. According to the West teams Assistant Coach Paul Mokeski, the game went as he and Head Coach Chris Finch had planned.

The East squad was led by Earl Barron and Reggie Williams who had 20 and 17 points respectively. Mokeski was quick to point out the success of the big men in the game.

Brian and Barron both played well. Its interesting the way basketball is starting to go where seven footers can spread the floor. Brians probably more of a three-point threat but Earl can get out and hit the 18-20 footer.

As for whether Brian Butch is now a call-up candidate, he wasnt too concerned. I dont pay attention to it. Its up to everybody else to worry about all those other things. I just go and play.

In other news, the three point competition came down to a duel between defending champion Blake Ahearn of Bakersfield and Utahs Andre Ingram. Ingram got out to a fast start in the final round and outscored Ahearn 21-18 to win the title.

He [Ingram] started off really hot and my first two racks were a struggle, said Ahearn. Its hard to play catch up when you only have a certain number of shots. He shot the ball well tonight and he deserved it,

Ingram wasnt worried about winning, he was just happy to be in the competition. It felt great. I was just focused and hoped that things went well. Im very fortunate to be here first of all and just thankful.
Read Next...