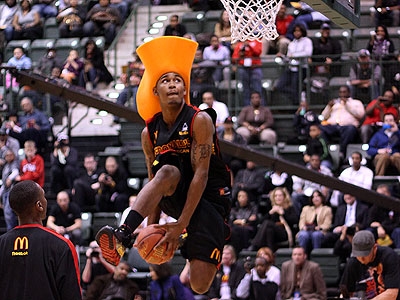 LeBryan Nash was the winner of the event over Duke commit, Marshall Plumlee. Scoring controversies were abundant so we decided to just post a dunk by dunk look at the action.

LeBryan Nash wears an outrageous, gigantic orange cowboy hat in honor of his future college Oklahoma State University as he runs down the lane and catches the ball off of a bounce from a teammate and then throws down a windmill.

Here is Nash's other dunk in the final round...

LeBryan Nash takes off, jumps over his West squad teammate and then jams the ball into the hoop hard with his right hand.

Marshall Plumlee's two final round dunks looked like this...

Marshall Plumlee takes the ball in one hand and jumps while moving his arm up and under before dunking it on the reverse side of the basket.

Plumlee was joined by fellow Duke commit Austin Rivers in the contest.

Austin Rivers starts from behind the backboard and only takes a few quick steps before jumping two-footed and windmill slamming it home.

P.J. Hairston was the fourth finalist of the group.

P.J. Hairston tosses the rock to himself from behind the arc and then catches it and one-hand windmills it home for the slam.

P.J. Hairston grabs the ball off of the bounce and then clutches before reverse dunking.

P.J. Hairston shoots it from behind the 3-point line and then catches it one-handed off the bounce before doing a 360 dunk.

Future Michigan State Spartan Branden Dawson was in the contest but did not advance to the final round.

Branden Dawson tosses it to himself from behind the arc and then catches it off of the bounce, grabs it two-handed before giving a slight windmill and dunking with both hands.

Branden Dawson quickly shoots it from behind the 3-point line and then catches it on the bounce and dunks it one-handed just before his time expires.

Amir Williams starts from behind the arc, runs into the lane and jumps off two feet before doing a 360 spin and stuffing the ball with two hands.

Khem Birch runs behind Michael Gilchrist who passes the ball off the side of the backboard before Khem catches it in both hands and then slams it home.

And one last LeBryan Nash dunk for good measure...

LeBryan Nash cuffs the ball in his right hand before taking off and bringing the ball up high and then swinging his arm through an arcing windmill and slamming it home.
Read Next...